One of the Shard climbers, Liesbeth Deddens, has tweeted that she is not ready to give up on reaching the top after 16 hours of climbing:

#iceclimb It is getting late.been going 16hrs and im tired.but not ready to give up with top in side.bit support?

Read: Who are the Shard protest climbers?

Ali Garrigan, currently one of six Greenpeace activists climbing exterior of The Shard, is still in "great spirits", Greenpeace said today after speaking to her.

Just spoke to Ali on phone at 230m. Tired but great spirits. Says she knows the world is cheering them on. (it gets harder now!) #iceclimb

The London Ambulance Service has tweeted that members of its hazardous area response team remain on standby at The Shard. They were reportedly called to the protest at 4.40am this morning.

We remain on standby at the #Shard http://t.co/nFOsPJEcXg 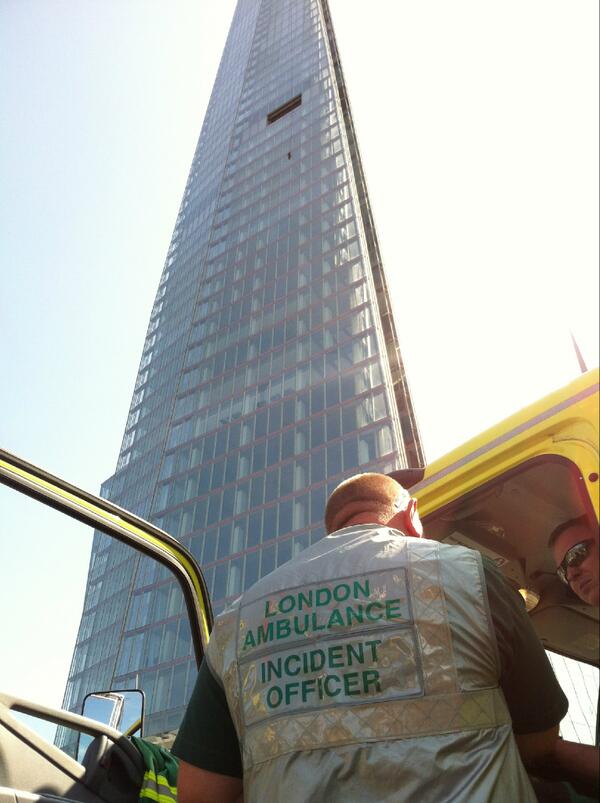 Greenpeace has tweeted brief biographies of five of the six women who are climbing The Shard as a protest against fossil fuel companies drilling in the Arctic.

Sabine (top left) was "inspired to train as a climber after helping other activists get ready in Belgium".

Sandra (top centre) is from Sweden and has "just finished an MA in environmental science". She is also the lead climber.

Liesbeth (bottom left) is from the Netherlands and "began climbing in high school". She now climbs ice, rock, alpine as well as The Shard.

Ali (botton right) is the only British protester. She has been climbing since she was 18 and hopes the protest can "bring attention to the dangers facing the Arctic".

The sixth climber is Canadian Victoria and is taking part because she "wanted to shout about something from the rooftops".

Environmental charity Greenpeace has tweeted this photo of the Shard climbers taking part in a training exercise yesterday. They appear to be using a ladder to climb through a hatch in the roof of a lorry.

The training appears to have been aimed at the first stage of the climb when the protesters emerge from a lorry via a ladder to start the ascent.

The Deputy Prime Minister has said he disagrees with activists climbing The Shard today, deeming it to be "dangerous".

Asked about the Shard protest during his call-in show on LBC 97.3 radio Nick Clegg said:

"Of course what they are doing looks extraordinary on the telly, (but) I don't actually support them doing something like that, which is going to tie up a lot of police time and is obviously quite dangerous.

"I really do think that they could get their point across to the companies which they are seeking to address in a different way."

In a statement, a spokesperson for The Shard said:

The Shard continues to work with the emergency services and we are in constant discussion with the Greenpeace representatives to ensure the safety of the protestors.

In the interests of public and protestor safety, the building’s emergency response team has advised The View to close with immediate effect.

We apologise to guests for the inconvenience caused and The View will be pleased to honour their tickets either later on today or on a different date.

All three restaurants and our offices remain open at this stage.

We take security, health and safety of all our occupiers and visitors to the building extremely seriously.

Victoria Henry, currently one of six Greenpeace activists climbing exterior of The Shard, says the team has nearly reached the top of the building.

Singers Annie Lennox and Radiohead frontman Thom Yorke, as well as actor Ewan McGregor, have all shown their support to six activists who have been climbing the Shard in protest of oil drilling in the Arctic.

Here's an example of risking life and limb for a cause you believe in…Show your support by sharing #iceclimb http://t.co/AJIpSxx3Nc

Outside The Shard, crowds gathered and commuters stopped to take pictures of the protesters as they progressed several hundred feet up.

The women are climbing in two groups - three in each.

They are currently about halfway up and appear to have stopped for a break.