The Independent Police Complaints Commission (IPCC) has renewed its appeal for witnesses of the Hillsborough disaster on 15th April, 1989:

The IPCC's Hillsborough Witness Appeal is ongoing. If you have info contact us http://t.co/JuyGP4NZ9Z

The IPCC said: "We want to deliver the most comprehensive account of what happened at Hillsborough and its aftermath. To do that we need your help".

The IPCC's latest Hillsborough investigation update revealed 101 police officers have been interviewed so far and 10 more are arranged.

"Given that we have so far established that 22 of the officers are now deceased that leaves us with 218 officers to interview", it said in a statement.

IPCC deputy chair Rachel Cerfontyne said, "From the responses to the appeal so far the major incident room has identified more that 750 matters for investigators to follow up on and speak to witnesses further".

"The witness appeal has also prompted more than 200 requests from witnesses to see their original accounts", she said, adding, "Work is ongoing to facilitate these requests".

The Independent Police Complaints Commission (IPCC) said it has asked the family of a Hillsborough victim if they would like it to investigate recent allegations made against the UK's most senior officer, Sir Bernard Hogan-Howe. 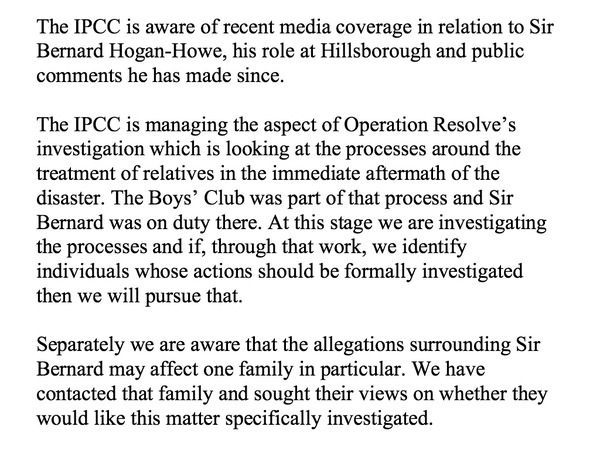