The tribute evening, organised by the Nelson Mandela Foundation, will be addressed by the former Archbishop of Cape Town, and will hear songs from the Soweto Gospel Choir.

Watch: Desmond Tutu: 'Thank you for the gift of Madiba'

As part of tributes in Parliament for Nelson Mandela, Labour leader Ed Miliband said the former South African leader was an "enduring symbol of courage, hope and the fight against injustice".

"He is an enduring symbol of courage, hope and the fight against injustice. He teaches us the power of forgiveness, showing no bitterness towards his captors, just the love of a country which could be so much better if all of its people could be free."

He said: "Nelson Mandela was a towering figure in our lifetime, a pivotal figure in the history of South Africa and the world, and it's right that we meet in this Parliament to pay tribute to his character, his achievements, and his legacy."

From South Africa ITV News Presenter Mark Austin writes on what the future holds for the new, post-Mandela, Rainbow Nation.

Mr Cameron said: "I think it's very important to mark the passing of an absolutely heroic figure in world history, someone who has given us extraordinary lessons to learn and to live by.

"I'm sure Parliament will rise to the occasion and will reflect the concerns right across this country that we've lost an incredible hero who did a brilliant thing for our world.

"I will be flying to South Africa with other heads of government and heads of state, to be there. I think its very important to pay our respects, to mark this moment, and to say goodbye to a remarkable man."

Deputy Prime Minister Nick Clegg has written about Nelson Mandela's legacy of human rights in a book of condolence to mark the passing of the former South African president.

The greatest tribute we can pay to his legacy is to fight for the human rights he championed. http://t.co/2FJBhuPhLf 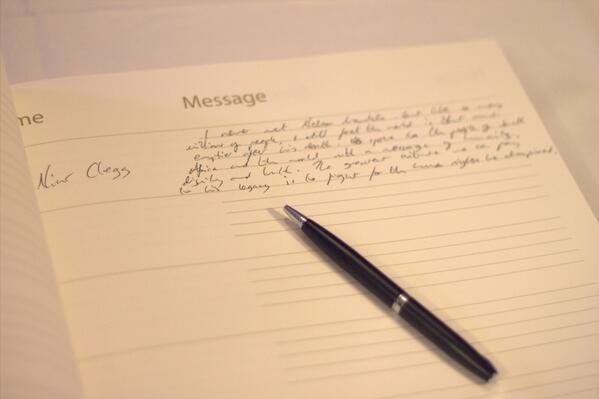 The Buddhist spiritual leader has twice been unable to obtain a visa.

His spokesman Tenzin Takhla gave no reason on Monday for the Dalai Lama's missing a memorial service in Johannesburg and funeral in Mandela's hometown.

Mr Takhla said only that "logistically it's impossible at this time."

Read: More than 50 heads of state to attend Mandela memorial

Security for the event is likely to be tight, as some of the world's most powerful people will be attending. Confirmed, so far, for Tuesday's memorial service:

So, far 53 heads of state from across the globe have confirmed they will attend the memorial service for Nelson Mandela, due to be held on Tuesday in Johannesburg. This number is expected to rise.

Some of the heads of state will speak at the service. After the service a new statue will be unveiled.