Police are trawling through hours of CCTV footage in the hunt for a man in a black hooded top suspected of leaving a bomb outside a busy restaurant in Belfast.

Vigilant passers-by who discovered the dissident republican device minutes before it detonated in the packed Cathedral Quarter district last night have been hailed by the Police Service of Northern Ireland (PSNI) for averting a tragedy.

Detective Chief Inspector Justyn Galloway, the PSNI officer leading the investigation into the blast appealed to anyone who may have seen the suspect carrying a black Slazenger bag around 6pm last night.

Mr Robinson said: "Once again we are witnessing the work of a mindless minority who are intent on taking the heart out of the city and wreaking havoc on the lives and businesses of the people of Belfast and Northern Ireland."

Mr McGuinness said those responsible had shown a complete disregard for human life: "Their actions have done nothing to move our society forward but instead have caused distress to local residents, disruption to Christmas revellers and loss of revenue for surrounding businesses."

The head of Ireland's government, Taoiseach Enda Kenny, has condemned the Belfast bombing as "a mindless attack" and encouraged people to stay "ever vigilant" to ensure peace in Northern Ireland.

"I condemn this atrocity as a mindless attack on the sanctity of human life, carried out by people whose depraved agenda cannot, and will not, be allowed to gain a foothold in Northern Ireland," Kenny said.

"We must remain ever vigilant in ensuring that peace in Northern Ireland is maintained, and that it continues on its path to becoming an ever more progressive society."

Police in Belfast will tighten security after a bomb exploded in the bustling Cathedral Quarter which could easily have killed or injured passers-by.

Police have already been stopping cars and checking car boots at the entrance of the Castle Court Shopping Centre in the city since last month.

The scene of the partial bomb blast has now been cleared, with a black mark on a nearby wall its only remaining trace.

A bomb that exploded in Belfast city centre was left on a footpath beside a busy restaurant - a totally different location to that named in a telephone warning, police have said.

Police Service of Northern Ireland (PSNI) Chief Superintendent Alan McCrum said the caller who telephoned in the bomb warning to a Belfast newsroom wrongly claimed the device had been left at a hotel.

Officers were in the process of evacuating around a thousand people from bars, eateries, homes, a theatre and a hotel in the bustling Cathedral Quarter district - which was packed with festive season revellers - when the device detonated just before 7pm. There were no reports of any injuries.

Chief Superintendent McCrum said the "totally reckless" bombing had the potential to kill or cause serious injury.

"This was an attack on the people of Belfast going about their normal lives on a busy night for socialising in the city ... those who carried out this attack have nothing to offer except disruption and destruction."

A witness, Mark Ashbridge, took this picture of the small blast in Belfast city centre.

It appears people had been pushed back before the explosion occurred.

Mark says "the glow is the result" of the blast:

No injuries have been reported.

The explosion in the Cathedral Quarter of Belfast occurred as officers were clearing the area after receiving a telephoned bomb warning, UTV has reported.

The warning was phoned into the Irish News at around 6pm before the bomb partially exploded just before 7pm in the Exchange Street West area.

It is understood the incident was not a car bomb attack, with officers believing a small-scale device was used.

A Police Service of Northern Ireland spokesman has said:

A number of businesses and streets in the Cathedral area of Belfast have been cordoned off following a small explosion.

It occurred at about 6.45pm as police were checking reports of a suspicious object.

At this stage there are no reports of any injuries.

UTV News producer Conor Shanley has posted an image of the cordoned-off scene near to the small explosion in Belfast city centre:

LATEST: Army bomb experts in attendance at the scene of the explosion in Belfast. http://t.co/0GOnXGb3Xt http://t.co/YsDaYo7if7 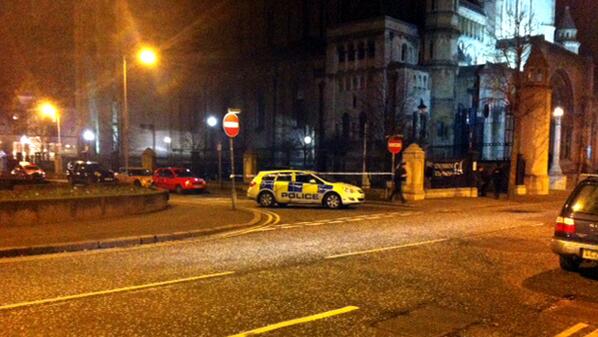 DUP MLA Jonathan Craig has condemned the blast in a busy area of Belfast city centre as "absolutely reckless".

UTV News reports him saying that there was "an explosion as the area was being cleared" and that it was a "miracle" if no one had been injured.

There is no confirmation of this from the police and there are no reports of any injuries, UTV says.