X Factor boss Simon Cowell has not spoken to this year's winner, Sam Bailey, but the singer said she hopes they meet up soon.

She said: "I've not spoken to him directly but he's sent a congratulations tweet and he is tapping in and ringing up people and just asking how I'm doing and has said he's really happy with things.

"I've not spoken to him directly but he's very busy as I am but we'll meet each other soon".After her win, Cowell tweeted to say "congratulations" and described her win as "well deserved".

After Sam Bailey's win last night X Factor bosses are hoping she will have the fastest turn around for her debut in the show's ten year history.

It is hoped it will be in the shops by the end of March.

Record bosses are hoping it will be ready for Mother's Day, on the final weekend of that month, to capitalise on her popularity following her win last night.

The star has now signed a deal with show boss Simon Cowell's company Syco as part of her prize for triumphing in the contest and she had already issued a digital version of her single Skyscraper.

"Sam, 36, will go into the recording studio next month to begin recording her debut album."The release date will be months ahead of the usual schedule for X Factor winners who have in recent years tended to opt for the autumn.

After Sam Bailey became the 10th winner of the X Factor, we look at how previous winners of the competition have fared in the industry.

So how did Leicester's Sam Bailey win the X Factor - here we've put together each one of her performances from the auditions to the final.

Sam Bailey has said she is "totally overwhelmed" after winning the X Factor.

Bailey, 36, triumphed over Nicholas McDonald to be crowned the 10th winner of the competition last night.

The former prison warden said her new-found fame was surreal, but was looking forward to spending time with her family and having the "best Christmas ever".

My girl @sambaileyreal did it! Congratulations on winning @thexfactor lady your talent is immense x

Congratulations MISS @sambaileyreal you deserve that!!! Wish ya sang CELINE on the final that rendition was my fav!!

Soooo happy about @thexfactor result!!!! I know I’m a bit late (no shock there!) haha but I’m SO pleased it was Sam!!! SOOO deserved!!! ? 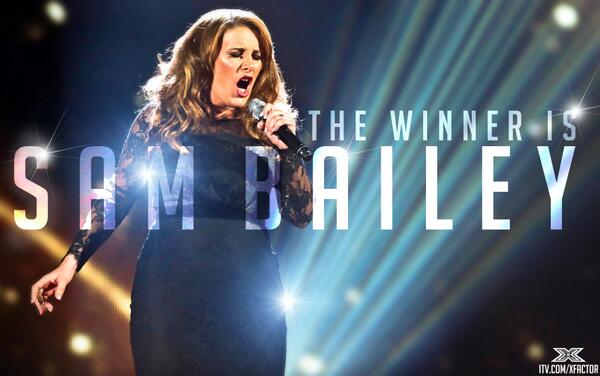 Sam Bailey performed Jennifer Rush's ballad The Power Of Love as her song of the series in the X Factor final. Judges hailed her performance as consistently good since her first audition.

Nicholas McDonald sang Angel by Sarah McLachlan as his song of the series in the X Factor final. Judge Nicole Scherzinger described the 17-year-old as an "angel with buttery wings".