The Niagara Falls on the US-Canada border could as well be in the Arctic this week after temperatures plummeted to record lows across the continent.

Watch: Boiling water trick shows how cold it is in America

Giant ice boulders have been formed along the shores of Lake Michigan, as freezing conditions in the US continues to impact the Midwest.

Footage of the ice boulders, which have formed in the freezing waters of Lake Michigan, was captured in Glen Arbor and shared on the town's local Facebook page.

The giant ice balls started as small chunks of ice, before growing layer by layer in sub zero water, with some locals claiming they are as big as 50cm in diameter.

The rare nationwide chill which has been caused by the so-called "polar vortex" - an Arctic low pressure system - is expected to keep a grip on much of the country for at least another day, with cutting winds and blizzards posing the most danger.

The Niagara Falls have been partly frozen into a cascade of icicles as a result of the extremely cold weather in Canada and the US.

These photos show the US side of the falls pictured from Ontario in Canada on Wednesday.

Watch video of the Niagars Falls in their icy glory here

Read: Will the UK get America's Big Freeze and snow?

Watch: Boiling water trick shows how cold it is in America

Hell has finally frozen over - at least as far as a US town is concerned where temperatures have plummeted well below freezing.

The small town of Hell in the state of Michigan saw temperatures drop to -20C and the 600 residents in the area have had to deal with deep snow that has left many vehicles stranded.

Read: US temperatures set to plummet to record lows

As much of the US experiences a dangerous and severe cold spell, does the UK have anything to worry about?

NBC News affiliate WGRZ has tweeted a picture of wintry conditions in Buffalo, New York, today as the cold snap which has seen temperatures plummet to -14C in the city. 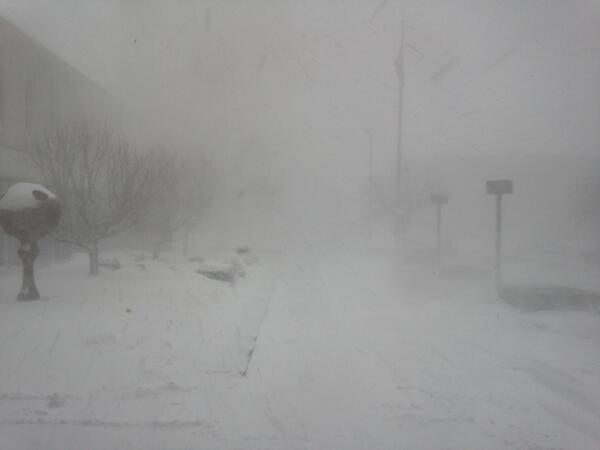 New York's Central Park hit a record low temperature for January 7 of -16C (4 degrees Fahrenheit) but with winds gusting to 32 miles per hour conditions felt far colder, according to the US National Weather Service.

The Arctic front sweeping across the United States has reportedly got so cold that the small town of Hell in Michigan has "literally frozen over".

According to Bloomberg News reporter, Derek Wallbank, temperatures have reached as low as -13C, with a wind chill of -33C.

The US National Weather Service has produced a graphic explaining the 'polar vortex' which has brought record low temperatures to many parts of the United States.

Read: US temperatures set to plummet to record lows

At least four people have been killed as an Arctic front continues to grip the United States bringing the coldest temperatures in two decades.

The weather-related deaths reported include a 48-year-old Chicago man who had a heart attack while shoveling snow on Sunday and an elderly woman who was found outside her Indianapolis home on Monday.