England coach Andy Flower has given his thoughts after the side's 5-0 defeat in the latest Ashes series.

England coach Andy Flower has admitted he is "angry" about the way the latest Ashes series went, but insisted he excited about the next series.

Flower is "angry about the way the tour has gone" but he definitely wants to take England forward. #ashes

Read: England cricket coach: There is time to get things right

England coach Andy Flowers has insisted "there is time to get things right" after his team's 5-0 whitewash in the latest Ashes series in Australia.

He also confirmed that he would stay on in his current role as coach.

Australia have beaten England by 281 runs in the fifth and final Ashes Test in Sydney, completing a 5-0 series whitewash.

England appeared to be heading towards an Ashes whitewash after another hapless batting display as they closed day two of the final Test 311 runs behind at the SCG.

The tourists subsided to 155 all out by tea, and then Chris Rogers (73no) guided Australia to 140 for four at stumps to keep the onus on England to buck all the trends of their hugely unsuccessful tour to avoid defeat number five here.

Only Ben Stokes provided an oasis of effective batting in an England innings which yet again fell well short of requirements.

They lost four wickets for 15 to stumble to 23 for five - and hard as Stokes battled, in stands of 39 with debutant Gary Ballance and 49 with Jonny Bairstow, it seemed England's miserable campaign was accelerating towards an apt conclusion.

England are all out for 155 in the fifth Ashes Test, trailing Australia by 171 in Sydney, and narrowly avoiding a follow-on by passing a target of 127 runs.

England's hopes of avoiding an Ashes whitewash were boosted after Ben Stokes took six wickets as the tourist's bowled Australia out for 326.

England cricketer Ben Stokes has claimed six wickets as the tourists bid to avoid a whitewash. Here are six facts about the Ashes debutant.

England have finished the day on 8-1 after bowling Australia out for 326 as they bid to avoid an Ashes whitewash.

All-rounder Ben Stokes took six wickets on day one of the Fifth Test in Sydney but Michael Carberry lost his wicket for a duck.

The England and Wales Cricket Board posted this picture on Twitter of Ashes debutant Ben Stokes claiming his sixth wicket for just 99 runs:

.@benstokes38 raises the ball after finishing with figures of 6-99 #Ashes http://t.co/Ew9Tkepics 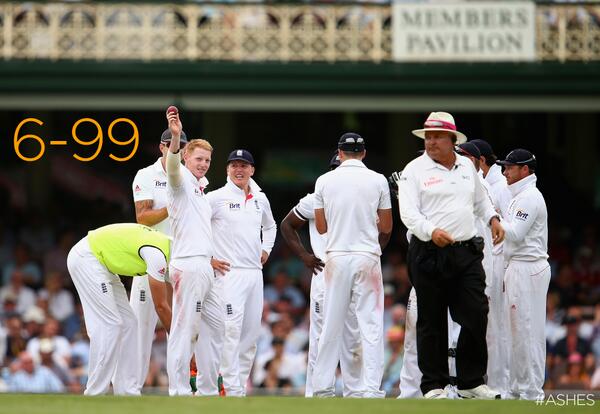 Australia were all out for 326 on the first day of the fifth Test in Sydney.