David Cameron said he favours cash payments to householders in compensation for the inconvenience caused by shale gas drilling near their properties.

The idea is under consideration as part of a package of financial incentives to encourage communities to accept a new wave of "fracking" wells, which Mr Cameron said could supply Britain's gas needs for the next 30 years and create 74,000 jobs.

The Prime Minister said that shale gas represents a "real opportunity" for the UK, and accused some opponents of being driven by an "irrational" reluctance to see any new carbon-based energy technology succeed.

He told the Commons Liaison Committee there would be "a serious amount of money" going into communities which accept shale gas wells, though it has yet to be decided how that cash should be split between county, district and parish councils

David Cameron is set to face questions about his support for fracking when he appears before senior MPs today.

The Prime Minister will be asked about the Government's wider energy policy during a 90-minute meeting with the Liaison Committee, with shale gas policy one of the topics likely to be raised by the MPs.

The meeting comes after yesterday's announcement by the Government to allow councils that give the controversial shale gas and oil extraction method the green light 100% of the related business rates.

The Department for Energy and Climate Change has tweeted an infographic outlining the stages of shale gas and oil, from the exploration stage through to decommissioning.

David Cameron has said he wants local communities to feel the benefit of the fracking industry as he defended Government plans to encourage the controversial practice.

Councils which approve fracking projects will be allowed to keep millions more in tax revenue under plans announced by the Prime Minister today.

Mr Cameron dismissed accusations that the move amounted to a bribe to local councils to ignore the environmental concerns around fracking, insisting that all concerns should be met "head on".

David Cameron's team has tweeted a picture of the Prime Minister at a gas facility near Gainsborough in Lincolnshire.

Energy firm Total had earlier confirmed it had spent £30m on two shale gas exploration licences for the area.

Hearing about the huge potential for jobs & growth from shale at an IGas site on the Lincs/Notts border #LongTermPlan http://t.co/w2LIj4YyGy 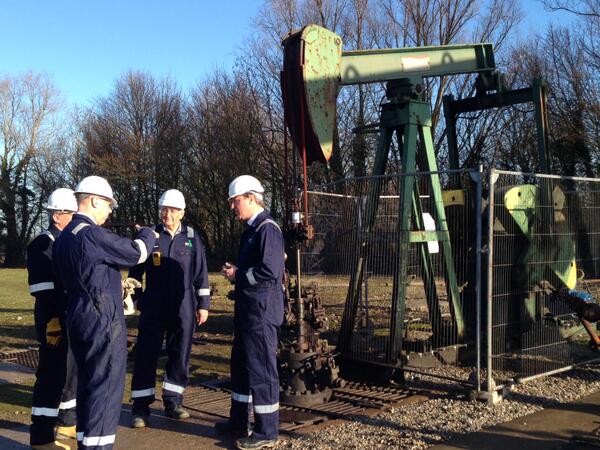 The Chief Secretary to the Treasury Danny Alexander has defended the Government's plan to allow councils which give fracking the go-ahead to keep 100 per cent of the business rates they collect.

Asked if that amounted to a bribe, he told ITV News: "Fracking offers a significant opportunity for the UK economy. It's a potential source of considerable amounts of energy for our country.

"In common with other areas of energy development where local authorities are allowed to keep business rates, and where there are other incentives for communities - it's important and fair we should treat fracking in the same way."

The potential for fracking shale gas in the UK is huge but so too is the opposition to the process.

Friends of the Earth spokesperson Jane Thomas says allowing councils to keep 100% of the business rates related to fracking could lead to conflicts of interests when planning applications are being considered.

She said: "This latest Government move highlights the depth of local opposition to fracking and the desperate lengths ministers are prepared to go to overcome it.

"People are right to be concerned about the impact of shale gas extraction on their communities - especially as experts say it won't lead to cheaper fuel bills.

"This move raises potentially serious concerns about conflicts of interest, if councils that benefit from this money are also the ones who decide on planning applications from fracking firms in the first place."

She added: "The Government should be encouraging the development of Britain's huge renewable power potential, instead of coming up with new incentives that keep the nation hooked on climate-changing fossil fuels."

He said: “Shale has huge potential in the UK, both in terms of keeping energy bills down and replacing the lost tax revenues from declining North Sea fields.

"Incentivising communities to accept infrastructure projects in the UK, whether new homes or power stations, is notoriously difficult."

He added: "Ensuring both councils and people living near shale wells benefit directly in the spoils should help smooth the planning process. This will help the economy both at a national and importantly a local level.”

The Prime Minister will visit the site following the announcement that England councils that approve fracking projects will be able to keep 100% of the related business rates.