A UN Twitter account has posted this image of world leaders in the Swiss town of Montreux ahead of the Geneva 2 summit on Syria. 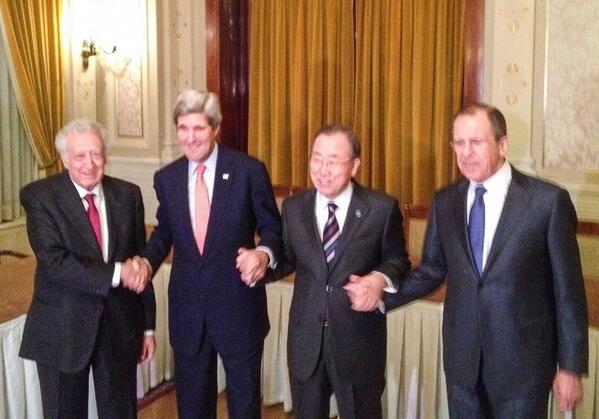 US President Barack Obama and his Russian counterpart Vladimir Putin have held a "businesslike and constructive" phone call ahead of tomorrow's talks on Syria, the Kremlin said in a statement.

A Syrian government delegation heading to peace talks in Switzerland was held up for hours in Athens after a Greek firm refused to refuel the plane they were travelling in.

Vassilis Alevizopoulos, head of Greece's Civil Aviation Workers Union, said a fuel firm had refused to refuel it because of European Union sanctions against Syria.

Syrian state television issued a terse statement saying the four-hour delay could cause foreign minister Walid al-Moualem to miss his meeting with UN chief Ban Ki-Moon. It said the plane had later resumed its flight.

Russian's Foreign Minister has he considers Iran's absence at the Geneva-2 peace conference on Syria as a "mistake" but sees no catastrophe, Reuters reports.

Syria's National Coalition opposition has confirmed it will take part in peace talks in Geneva this week after the United Nations withdraw its invitation to Iran.

A UN spokesman explained that Secretary-General Ban Ki-Moon withdrew Iran's invite after it refused to accept the goals of the Syrian peace talks, including "the establishment of a transitional governing body with full executive powers":

In a series of meetings and telephone conversations, senior Iranian officials assured the Secretary-General that Iran understood and supported the basis and goal of the Conference, including the Geneva Communiqué.

The Secretary-General is deeply disappointed by Iranian public statements today that are not at all consistent with that stated commitment.

He continues to urge Iran to join the global consensus behind the Geneva Communiqué.

Given that it has chosen to remain outside that basic understanding, he has decided that the one-day Montreux gathering will proceed without Iran’s participation.

The United Nations has withdrawn its invitation to Iran to attend the Syria peace talks in Geneva after the Syrian political opposition threatened to pull out.

A coalition of Syria's political opposition groups has said it is waiting to hear whether the UN Secretary General will rescind Iran's invitation to take part in peace talks.

The group previously gave the UN a deadline of 7pm to make a decision.

The SG will outline if he'll rescind Iran's invitation to Geneva 2. The Syrian Coalition will follow the SG with its decision. #Geneva2

A statement from the group said it expects the Secretary General to hold a press conference in the next few hours.

The UN Secretary General is "urgently considering his options" following the "disappointing conduct of some participants" in forthcoming peace talks on Syria, the Associated Press reports.

The report cites Ban Ki-Moon's spokesman as saying that he is "dismayed" after some participants threatened to pull out of the talks in protest at Iran's invitation.

The spokesman is cited as saying that the "disappointing public statement" made by an Iranian minister earlier today "fell short by some measure of what the Secretary General expected to hear".

US: Iran invitation to Syria talks should be withdrawn

UN Secretary General Ban Ki-Moon has said that "intensive and urgent" discussions are underway ahead of a major round of Syria peace talks on Wednesday.

Earlier, Iran's foreign minister Hosein Amirabdollahian is cited as saying that he would not accept any preconditions to take part in the 'Geneva 2' summit in Switzerland.

The ISNA news agency cited him is saying that it could not accept plans for a political transition in Syria as discussed at talks in 2012.