The ITV News Index today shows you've got around 60% of people who think that the recovery, such as it is so far, is only benefiting the wealthy.

That is almost exactly the same figure as the number of people who back the idea of putting the top rate of tax back up to 50p.

It may not be a coincidence that those two figures are aligning. Clearly there are a lot of people who feel locked out of the benefits of economic recovery. I think that is a serious issue for the Tories.

The other issue is that Labour and the Tories are now trying to fight on totally different bits of the battlefield.

The Tories are concentrating on the economy as a whole, saying: 'Look, you know it was in a mess. We fixed it and we need to continue the job'.

The Labour party is saying that even if they do fix the economy, it's not going to benefit all of you.

Very different interpretations and I guess the election will show which one was right.

Chancellor George Osborne has insisted that he is prioritising the living standards of people on lower-middle incomes by addressing job security and a "tax policy that leaves them with more money in their pocket".

Economics Editor Richard Edgar asked for his response to an ITV News Index that found that 61% of respondents believe that only the wealthy have benefited from the economic recovery:

Chancellor George Osborne says that where the government can "help people on lower-middle incomes" it is "taking action".

Responding to an ITV News Index that found that 61% of respondents think the economic growth has only benefited wealthy people, he said:

He said that raising the personal allowance to £10,000 from April 2014 and freezing fuel duty were further evidence of the action the government is taking to improve living standards.

Chancellor George Osborne made a joke at Ed Balls' expense after figures showed that Britain's economy went up by 1.9% last year.

Mr Osborne claimed that the shadow chancellor had missed all of his economic forecasts and suggested Labour needed "new crystal balls."

40% of voters believe the state of the economy has got better in the past three months while 25% thought it had got worse and 34% said there had been no change, according to the ITV News Index carried out by ComRes.

That figure is the highest ever in the ITV News Index since the question was first asked in October 2010.

The Government understands the concerns of banks and big businesses more than families, according to the latest ITV News poll.

69% of voters said the Coalition understands the concerns of banks and big businesses, more than small business and entrepreneurs (32%) or families (23%), according to the ITV News Index carried out by ComRes.

On the day official statistics showed the British economy grew at its strongest rate since 2007, a majority of voters questioned for an ITV News poll believe the wealthy have benefited the most from the improving financial fortunes.

61% of voters thought the economic growth had only benefited wealthy people while 18% disagreed and 21% said they did not know, according to the ITV News Index carried out by ComRes.

And 74% of those quizzed believe that in the current economic situation the gap between rich and poor is getting bigger, while 10% disagreed and 15% said they did not know.

Read: Ed Balls claims 'this is not a recovery that is built to last'

Shadow chancellor Ed Balls has welcomed today's economic growth but added that with construction output down and business investment "weak" this was not "a recovery that is built to last."

Today’s growth figures are welcome and long overdue after three damaging years of flatlining. But for working people facing a cost-of-living crisis this is still no recovery at all.

Wages are now down £1600 a year after inflation under David Cameron and tax and benefit changes since 2010 have left families worse off by an average of £891 this year.

And with business investment still weak, construction output down and housing demand outstripping housing supply, this is not yet a recovery that is built to last.

Risks remain in the global economy and simply to catch up all the lost ground since 2010 we need 1.6 per cent growth each quarter between now and the election.

Output in the services, agriculture and production sectors all increased during the fourth quarter of 2013 but construction dropped by 0.3%, according to the Office for National Statistics.

Strongest growth seen in the services industries, which were up 0.8% http://t.co/VjA9ZOxlYv http://t.co/60JrmFWD8R 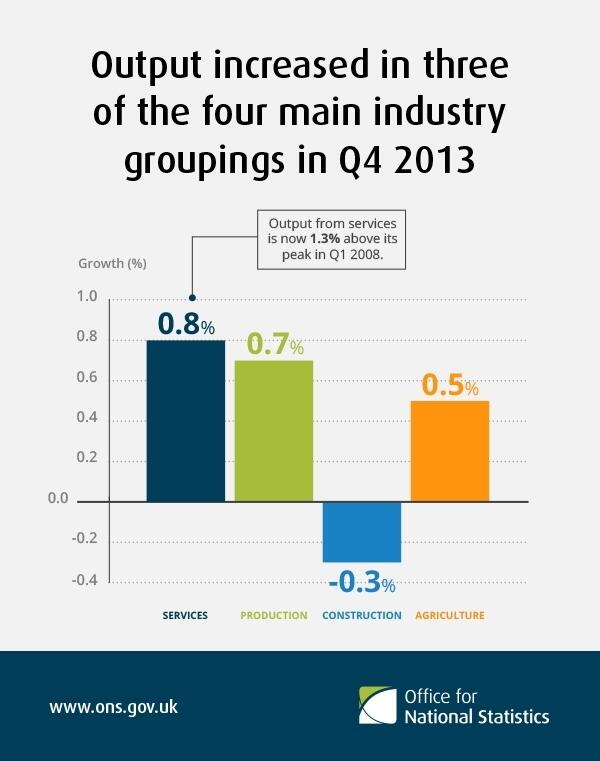