ITV News looks at three measures that, if used, could have done to minimise the damage caused by two months of record-breaking rainfall.

The Met Office advised councils to expect a dry winter in advance forecasts issued in November according to the Daily Mail.

The three-month forecast was also given to the Environment Agency and other contingency planners to tell them what to expect from December 2013 to the end of this month.

The paper claims a Met Office spokesman conceded the planning was ‘experimental to some extent’.

Yesterday it was confirmed that the UK has seen the wettest winter on record, with some areas still under water.

Using correct water management techniques could have prevented some of the damage from the recent floods, a group of experts has said in an open letter to the prime minister.

"Water management techniques could have helped prevent the effect of flooding on villages, towns and over surrounding land seen recently. Emergency measures are in order for the immediate crisis."

Read: UK has had wettest winter on record

Urging David Cameron to adopt new measures on flood prevention they added: "But in the long term, the management of water requires a clear strategy."

Investment in flood defences would be a priority for an incoming Labour government, Ed Balls has said in an article calling for ministers to make long-term decisions on the flooding problem.

Writing in The Telegraph, Mr Balls accused the coalition Government of "short-termist salami-slicing" of budgets for flood defences, and said that 300 "shovel-ready" schemes were shelved last year because of lack of funding.

Labour's ongoing "zero-based review" of public spending has made clear that funds should be directed towards preventive work which can save money in the long term, he said.

An incoming Labour government would need to make spending cuts, he said, adding: "But how we make those cuts is vital.

"Our zero-based review of public spending - a root-and-branch review of every pound spent by government from the bottom up - is clear that we must eliminate waste and inefficiencies, but also prioritise preventative spending that can save money in the long term.

"There can be few better examples than investment in flood defences."

Even before the season is over the Met Office say this has been the wettest winter in over 100 years.

The dark brown area shows the surface water runoff from the recent floods. It happens when the soil is so saturated excess water from rain flows over the land.

What an image - brown is runoff from floods “@iweathernews: Stunning satellite view of Britain note the runoff http://t.co/h7C1yNCUGQ” 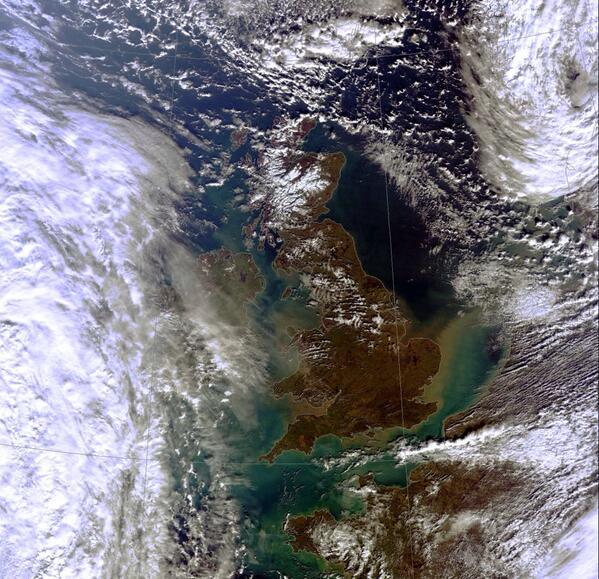 The UK has had the wettest winter on record, with 486.8mm of rain falling, beating the previous record set in 1995, the Met Office has announced