The flood which caused a major road in south London to close last night was the result of a burst water main which had mixed with mud and silt, Thames Water said.

Initial reports suggested that a sewage pipe had sprung a leak, with one policeman at the scene describing it as a "stinky sewage".

However, a Thames Water spokesman later confirmed that the flood was a result of a burst water main, which had mixed with silt and mud.

Residents close to where a water main burst have described seeing "revolting, brown" water flowing down a south London road.

Pictures have shown murky water flowing down Clapham Road in Kennington, south London as firefighters battle to contain the situation.

"The road has been made into a river. It's a bit like Somerset," Angela Reynolds, 58, said.

"It's not clear how they are going to stop it. The water is revolting, brown, muddy - well I hope it's mud.

"There are lots of basements around here. One of the houses has already been badly flooded. The water just flooded the road in 10 minutes. It was quite incredible."

Read: Firefighters escort resident out of flood in South London

Several roads in London have been closed after a burst main caused major disruption in the area, London Fire Brigade said.

"Four fire engines and around 20 firefighters have been called to deal with a burst water main near the junction of Clapham Road and Claylands Rd in Stockwell, SW9," a statement read.

"The roadway has flooded to a depth of about four inches after the 30 inch water main burst. "

London Fire Brigade said Clapham Road (A202) is currently closed between Oval and Stockwell tube stations, while several other roads in the area have also been affected, including Fentiman Road, Palfrey Place, Trigan Road, South Island Place and Handforth Road.

People have been advised to avoid the area as the clean-up continues.

"As well as pumping away water, crews are positioning sandbags as a precaution to protect properties that may become vulnerable to the flood water," the statement concluded.

This is seriously grim work, so fair play to the firefighters... #londonpoo http://t.co/tZ3jHK5XZA 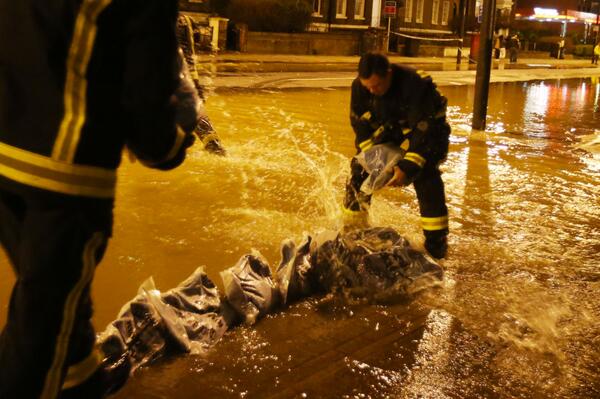 A major road in South London was closed by the emergency services after homes were flooded with what appeared to be sewage as a result of a burst water main.

A spokeswoman for Thames Water said: "A burst water main has caused flooding to Clapham Road. Engineers are on site working to manage the burst."

Pictures: Firefighters escort resident out of flood in South London

Rescued from the #londonpoo as a firefighter escorts a young lady through the brown stuff in South London http://t.co/fMyiVnzQDo

Flood defences are now moving in to try and stop the flow of the #londonpoo. But Is it coming to a street near you? http://t.co/WhJ6On7qjd 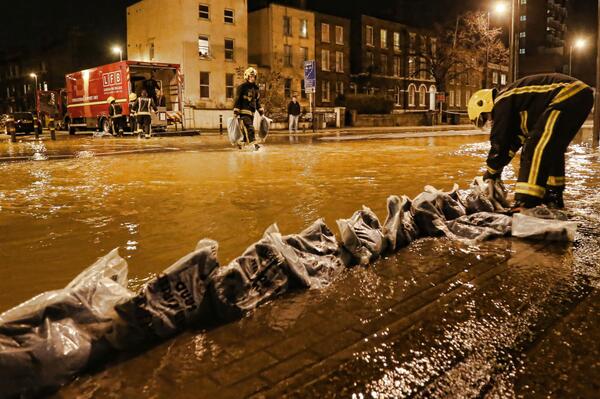 @londonfire and @thameswater on scene in Clapham Road. Will update shortly. Local residents advised to stay indoors at this time

A burst water main has caused flooding in south London, closing a major road. Reports suggested sewage was pouring into people's homes as a result

Local resident, Angela Reynolds, 58, said: "The road has been made into a river. It's a bit like Somerset.The water is revolting, brown, muddy - well I hope it's mud.

The water just flooded the road in 10 minutes. It was quite incredible."