He said: "Our focus has been on finding the aircraft and we have not done anything that would jeopardise this search effort...Malaysia has nothing to hide."

He added: "There is no precedent for this. The plane vanished."

US investigators suspect that Malaysia Airlines Flight 370 stayed in the air for about four hours past the time it reached its last confirmed location, the Wall Street Journal reported, citing two people familiar with the details.

The report comes as authorities remain uncertain about which ocean to search for the jetliner that went missing on Saturday after taking off from Kuala Lumpur.

It raises the possibility that the plane, and the 239 people on board, could have flown on for hundreds of additional miles under conditions that remain murky, the newspaper claimed.

Chinese Premier Li Keqiang said as long as there remains a "glimmer of hope" China will not stop the search for the missing Malaysian Airlines jet.

"This is an international and large-scale search operation involving many countries," he said. "The Chinese government has asked the relevant party to enhance coordination, investigate the cause, locate the missing plane as quickly as possible and properly handle all related matters."

It is the sixth day of the search for the flight, which went missing flying from Kuala Lumpur to Beijing and China has dispatched multiple aircraft, ships and satellite in the multinational search mission.

A Vietnam military jet searching for clues to the missing Malaysia Airlines jet has found no wreckage at the location where Chinese satellite images showed possible plane debris, Reuters reported, citing a witness.

Vietnam has sent another plane to check the area where Chinese satellites showed objects that could be debris from a missing Malaysia Airlines jet, Vietnamese military officials said.

"We are aware and we sent planes to cover that area over the past three days," Deputy Transport Minister Pham Quy Tieu said. "Today a (military) plane will search the area again,"

Another military official said Vietnam was waiting to see photographs taken by a Chinese satellite on Sunday in waters northeast of Kuala Lumpur and south of Vietnam in order to identify the exact location for further inspection.

China's civil aviation chief said today that there is no proof that floating objects detected in the South China Sea by satellite images are connected to a missing Malaysia Airlines aircraft.

"Chinese satellites have found smoke and floating objects ... At present we cannot confirm this is related to the missing aircraft," Li Jiaxiang told reporters on the sidelines of China's annual meeting of parliament.

He added that there was also no evidence the Malaysian military was concealing information about the missing flight.

Chinese scientists have claimed satellite images of unknown objects in the ocean may be related to the disappearance of the missing flight MH370.

The images will only increase the speculation on the whereabouts of the flight, carrying 239 people, which disappeared in the early hours of Saturday.

Authorities have been unable to establish what happened, while the search area has been extended.

Images from Chinese satellite on 9th shows three objects in the possible site of #MH370 Verification is in progress. http://t.co/yn9MYLmDDl 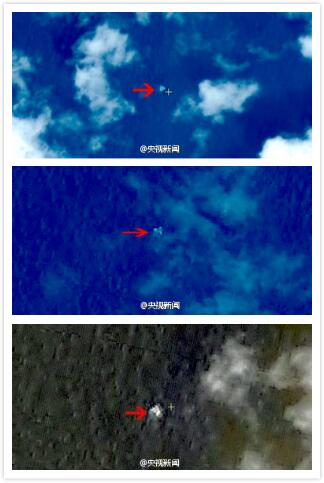 The missing Malaysia Airlines flight crew replied "All right, roger that" in its last communication before it went missing five days ago.

Malaysian authorities were forced to defend their handling of the operation to find the missing flight MH370 today as relatives expressed their anger at the lack of developments in the search.

Families' frustration at the lack of progress boiled over in Beijing when water bottles were thrown at officials.

The frustrations of the families of the passengers on board the missing Flight MH370 boiled over as angry relatives threw bottles at Malaysia Airline officials.

The video, taken in a Beijjing hotel room and posted to a Chinese social media site, appeared to show several water bottles being thrown at representatives as they delivered no new information on the fate of the 239 passengers.

The search for the plane, which disappeared off the radar at 1.30am on Saturday, has so far proved fruitless with aviation experts calling it one of the most baffling mysteries in recent history.

Operations to find the aircraft are now covering 27,000 nautical miles with some 42 ships and 39 aircraft from several countries now involved in the search.