Comedian Sandi Toksvig has said there was "many a time I thought this day would never come" after renewing her wedding vows with her partner Debbie to celebrate the introduction of gay marriage in the UK.

Toksvig came out as gay in September 1994 and recounted how she was told she would never work again and had to go into hiding with her children following negative press attention.

She said: "At the time there was not a single gay woman out in public life. How wonderful it feels to be so much safer than 20 years ago."

The couple, who first entered into a civil partnership seven years ago, were joined by more than 2,000 people, including their four children, at the Royal Festival Hall on London's South Bank.

The first same-sex marriages in England and Wales have begun after changes in law giving gay couples the right to marry for the first time.

Rebecca and Sarah-Louise Billington-Green from Tipton have today made history as they became one of the first same sex couples to get married.

You can't take equality "too far"

The rainbow flag is flying Birmingham city centre as the first same-sex couples are getting married across England and Wales.

A wedding planner is now arranging her own big day, thanks to a change in the law, which came into effect at midnight.

Shadia Thannon (right) manages a hotel in Newcastle, which hosts weddings. She will marry her partner Catherine Martin there in July, becoming one of the first same-sex couples in the North East to marry.

They had been planning a civil partnership, until the change in the law in England and Wales last summer made marriage legal for same-sex couples:

"For us it's really important, it means our relationship is seen equally in the eyes of the law. That's something neither of us really ever expected to happen," Catherine said.

A change in the law has given gay and lesbian couples the right to marry for the first time in history, but a campaigner in the North East of England said there was a long way to go to combat social prejudice.

Mark Nichols, the Chair of Northern Pride, said he still would not be comfortable holding hands with his partner in the centre of Newcastle:

Congratulations to the gay couples who have already been married - and my best wishes to those about to be on this historic day.

Sean Adl-Tabatabai and Sinclair Gray Treadway have become one of the first same-sex couples to marry in the UK.

Mr Treadway commented: "Hopefully one day we'll look back in the future and we won't still be fighting for rights but we'll all be accepted."

Video of the marriage courtesy of Sean James Cameron:

The ceremony took place at Camden Town Hall at one minute past midnight. Mayor of Camden Councillor Jonathan Simpson conducted the historic service.

David Cameron hailed the first same-sex marriages in England and Wales as sending a "powerful message" about equality in Britain. 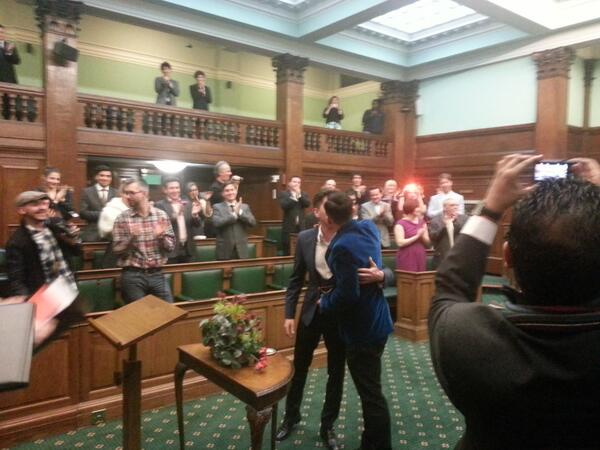 It's great to wake up in a country where, if I ever want to re-marry, I can marry whomever I fall in love with next. #equalmarriage