One of the leaders of the pro-Russian separatists in Donetsk has reportedly asked Vladimir Putin to consider absorbing the eastern Ukrainian city into the Russian Federation.

Denis Pushilin, co-chairman of the self-styled 'People's Republic of Donetsk', made the declaration at a news conference following a referendum on independence that the separatists said had been backed by 89% of voters in Donetsk.

One of the leaders of the pro-Russian separatists in Donetsk has said it would be an "appropriate step" for the region to join the Russian Federation following this weekend's referendum on independence.

The rebels say they received 89% backing for making the area near the Russian border independent from Ukraine.

Roman Lyagin, head of the electoral commission in Donetsk, told a press conference: "Joining the Russian Federation would probably be an appropriate step."

However, another of the movement's leaders, Denis Pushilin, said a decision on which country to join would only come after "consultation with experts".

Well that’s the voting over, and no surprises so far. A ‘Yes’ vote claimed to be 89% in Donetsk, and suddenly Ukraine is no more.

Flowers have been left outside a municipal building in eastern Ukraine after two men were shot dead by Ukrainian troops.

The incident occurred in the town of Krasnoarmeisk as armed guards attempted to disperse a crowd of protesters.

Flowers at the scene of #Krasnoarmeysk shooting. Two deaths from ricocheting bullets fired by Ukr troops into tarmac http://t.co/wwXatPhhGx 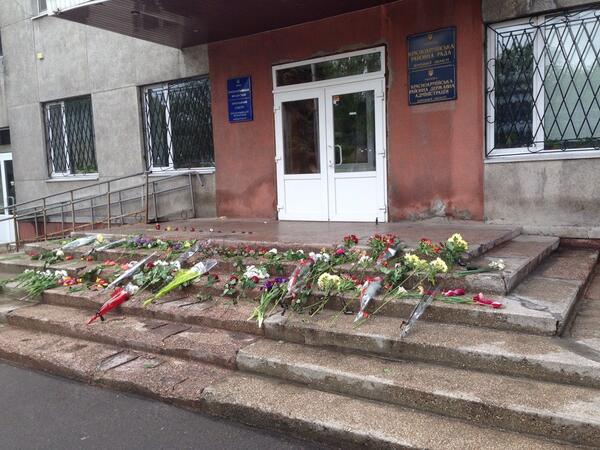 Russia has said the results of the self-rule referendums in eastern Ukraine respects the will of the people in Donetsk and Luhansk regions.

The Kremlin said the outcome of the public votes should be implemented in a civilised manner without violence.

Foreign Secretary William Hague has said the self-rule referendum held in eastern Ukraine has "zero credibility in the eyes of the world" after 89% of voters backed the proposals.

The European Union is expected to apply wider sanctions against Russia over the situation in Ukraine.

Diplomats have told Reuters some 14 people and two Crimea-based companies could be targeted with sanctions at a meeting in Brussels.

When asked whether EU foreign ministers would agree to expand the sanctions list, Dutch Foreign Minister Frans Timmermans said: "I believe so."

Mr Turchinov accused Russia of looking to overthrow his country's leadership and trying to disrupt the May 25 presidential elections.

ITV News Europe Editor James Mates has said while the headline figure for the percentage of voters in eastern Ukraine backing self-rule looks likely, the claims of a mass turnout are exaggerated.

Among those who voted in #Donetsk referendum yesterday, 90% "Yes" is credible. But 75% turnout figure is absurd. Most "No"s boycotted.

Read: 89% vote in favour of self-rule in Donetsk

One died and a second was wounded after the Ukrainian National Guard tried to disperse a crowd at a municipal building - Interfax-Ukraine news agency has said.

Members of the Guard's "Dnipr" battalion fired shots as a crowd tried to block their entry into the building. It gave no details of the shooting.

More: '89 per cent' of eastern Ukraine voters back self-rule