Saudi Oil Minister Ali al-Naimi said on Monday the world's top exporter was willing to supply markets with more crude oil in case any shortage arises, if the crisis between Russia and the West over Ukraine worsens.

Speaking on the sidelines of a conference in Seoul, Naimi also said $100 a barrel was a fair price for oil.

100 dollars is a fair price for everybody - consumers, producers, oil companies.

It's a fair price. It's a good price.

Read more: '89 per cent' of eastern Ukraine voters back self-rule

The Ukraine government have called the referendum in eastern Ukraine "illegal" with the rest of the international community saying it isn't recognized, but large numbers voted today for independence.

One queuing voter said "We want this referendum to be independent fro Ukraine, not to be with this nazi Ukraine."

Nearly 90 percent of voters in eastern Ukrainian region voted for self-rule, the head of the separatist election commission said.

Eighty-nine per cent of voters in eastern Ukraine have voted in favour of self-rule for the region, according to a statement from the head of the separatist election commission in Donetsk.

One man was shot dead and a second was wounded when the Ukrainian National Guard tried to disperse a crowd outside a municipal building in the eastern Ukrainian town of Krasnoarmeisk, which lies north-east of the city of Donetsk.

The Interfax-Ukraine news agency quoted witnesses as saying the incident occurred when members of the Guard's "Dnipr" battalion fired shots as a crowd tried to block their entry into the building.

Video taken at the building appeared to show a crowd dispersing as shots rang out, although It was unclear where the shots came from, reported Reuters.

Read: EU 'will not recognise' self-rule poll in eastern Ukraine

The European Union said it would not recognise the result of a referendum on self-rule held by pro-Moscow rebels in east Ukraine on Sunday.

A spokeswoman for EU foreign policy chief Catherine told Reuters: "The so-called referenda in ... parts of Luhansk and Donetsk regions were illegal and we do not recognise the outcome.

"Those who organised the referenda have no democratic legitimacy."

The spokeswoman said holding the referendum ran counter to the objectives of an agreement reached by Ukraine, Russia, the EU and the United States last month aimed at defusing the Ukraine crisis.

French President Francois Hollande dismissed a referendum on self-rule in east Ukraine, saying the only vote that mattered was a presidential election on May 25.

Separatist rebels went ahead with the vote in defiance of Ukraine's pro-Western government and one announced plans to form their own state bodies and military once results are announced.

A separatist leader from Donetsk region said it would form its own state bodies and consider Ukraine's government soldiers in the region "occupiers" once results of the self-rule referendum were announced.

"All military troops on our territory after the official announcement of referendum results will be considered illegal and declared occupiers," Denis Pushilin, a leader of the self-styled Donetsk republic said, according to Interfax news agency.

A separatist leader from Ukraine's eastern Donetsk region said it would form its own state bodies and consider government soldiers there as "occupiers" once results were announced from Sunday's self-rule referendum, Interfax news agency said.

"All military troops on our territory after the official announcement of referendum results will be considered illegal and declared occupiers," Denis Pushilin, a leader of the self-styled Donetsk republic said, according to the agency.

"It is necessary to form state bodies and military authorities as soon as possible," Interfax said he added.

Thousands of people are trying to cram themselves into a building to vote in an independence referendum in eastern Ukraine, ITV News Senior Foreign Editor John Angier reports: 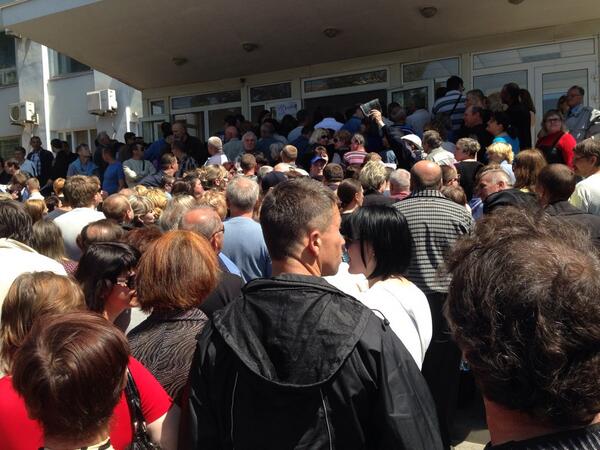 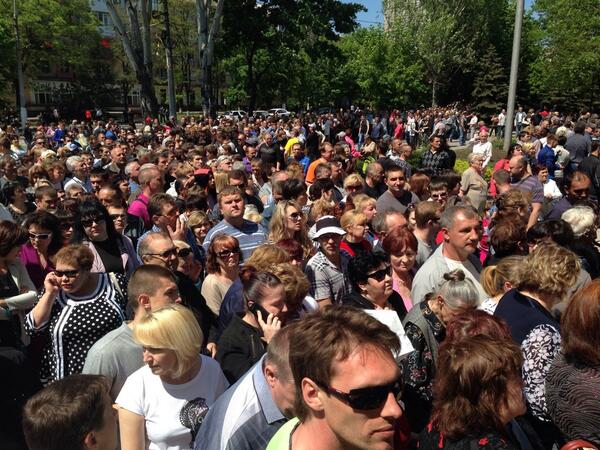