A peaceful pro Ukrainian march in Donetsk has been broken up by thugs with sticks while riot police stood by, according to ITV's Europe Editor James Mates.

Our producer Evgeny hit on the head by a brick as we ran from the pro-Russian attack http://t.co/KIS5dRn6bV 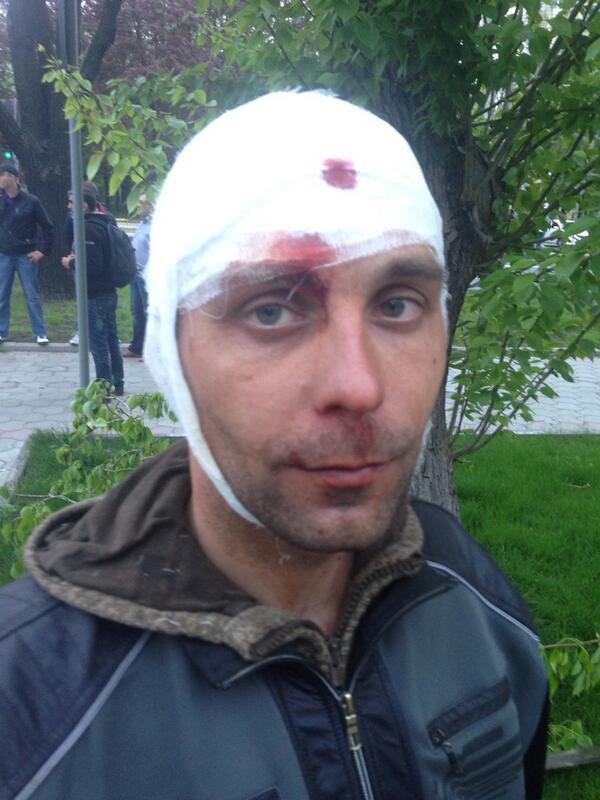 Heads broken by pro-Russian thugs as a peaceful rally broken up in #Donetsk http://t.co/au3Obw7Vt0 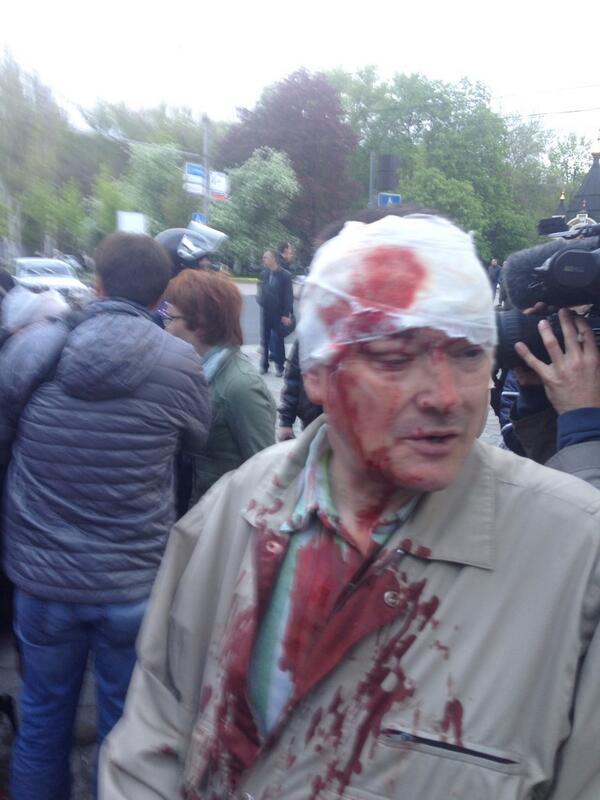 Russia has said the number of Ukrainian military forces deployed in the southeast of the country should cause "deep concern" among members of the Organization for Security and Cooperation in Europe.

In a statement, the Russian Foreign Ministry said there were more than 11,000 Ukrainian troops, 160 tanks, 230 armoured vehicles and 150 artillery pieces deployed in the region as part of an operation to counter pro-Russian separatists.

Hours after taking over the east Ukrainian town of Kostyantynivka pro-Russian gunmen posed for photographs with civilians outside the seized town hall, even allowing young children to pose with their weapons for the shots. 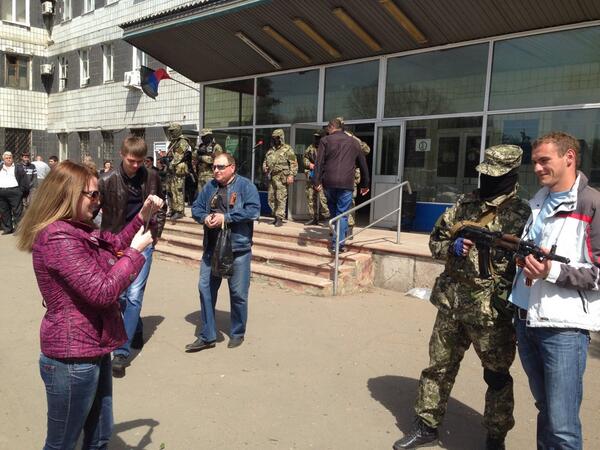 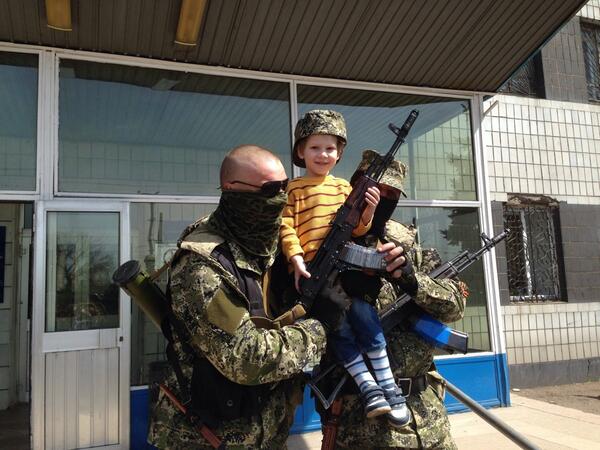 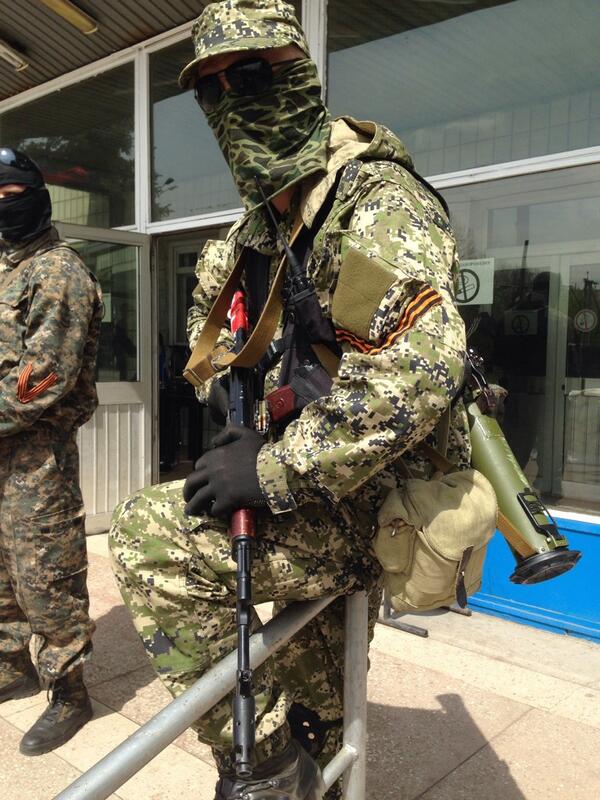 The masked gunmen captured the police headquarters and the town administration building today. 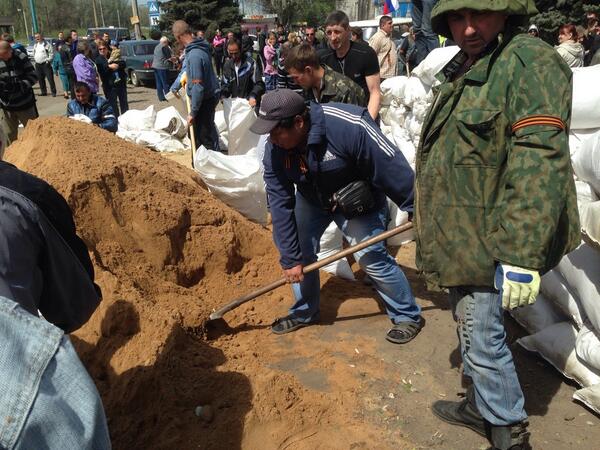 Gennady Kernes, the mayor of Ukraine's second-biggest city, Kharkiv, is in hospital undergoing emergency surgery after being shot in the back, Interfax reported, quoting the mayor's spokeswoman.

"The doctors are fighting to save his life," the agency quoted the spokeswoman, Tatiana Gruzinskaya, as saying.

Armed pro-Russian separatists who captured the police headquarters in the east Ukrainian town of Kostyantynivka have also seized the town administration building, a spokesman for the regional government said.

"I think it's the usual demands, the same as in other towns, the scenario doesn't change: a referendum and a federal system of government," said Ilya Suzdaliev, a spokesman for the Donetsk region administration, which includes Kostyantynivka.

Pro-Russian separatists have seized a police headquarters in the Donetsk town of Kostyantynivka, eastern Ukraine, according to the Ukrainian Interior Ministry.

A spokesman for Alex Salmond has played down the Scottish First Minister's comment that he admired "certain aspects" of Vladimir Putin's leadership.

The spokesman pointed out that the interview, conducted by former Labour spin doctor Alastair Campbell for GQ magazine, took place before the annexation of Crimea from Ukraine.

"Since then, the Scottish Government has made our position abundantly clear on the illegal annexation, including the decision to withdraw the invitation to the Russian Consul General to the annual Scottish Consular Corps dinner," he said.

SNP leader Alex Salmond has said he admires "certain aspects" of Vladimir Putin's leadership of Russia and said he had "restored a substantial part of Russian pride.

In an interview with former Labour spin doctor Alastair Campbell for GQ magazine, the First Minister said Mr Putin was "more effective" than some perceive him to be.

However, he also tempered his praise by criticising "aspects of Russian constitutionality and the inter-mesh with business and politics" in the country.

Several people were injured today as pro and anti-Russian protesters including thousands of Ukrainian football fans clashed in the eastern city of Kharkiv.