If there was hope that the release of the OSCE hostages means that there is a will to de-escalate things, there's no evidence of that yet.

The freed OSCE observers have arrived in Kiev after being held for more than a week.

John Kerry, the US Secretary of State, has welcomed the release in Ukraine of military monitors from the Organization for Security and Cooperation in Europe (OSCE) but said more steps were needed to de-escalate the crisis.

After landing in the Democratic Republic of Congo for a visit, he said: "We will both advance ideas about how to do that, without any promises of what those possibilities may produce. In the end, we reaffirmed our support for the OSCE."

Kerry said he spoke by phone with Russia's Foreign Minister Sergei Lavrov and that both would discuss with Switzerland's president ways the OSCE might "play a larger role in perhaps facilitating the de-escalation".

Military observers, who were freed today after being held hostage by pro-Russian separatists in Ukraine, hugged friends and colleagues moments after they were released by their captors.

Read: Ukrainian assault on rebel stronghold after 46 killed in fire

OSCE military observers, who were held hostage by pro-Russian separatists in Ukraine, told ITV News they were treated well by their captors.

One of the freed #sloviansk hostages greeted by British Ambassador to OSCE on release from 8 day captivity #ukraine http://t.co/8izrfFzTrR 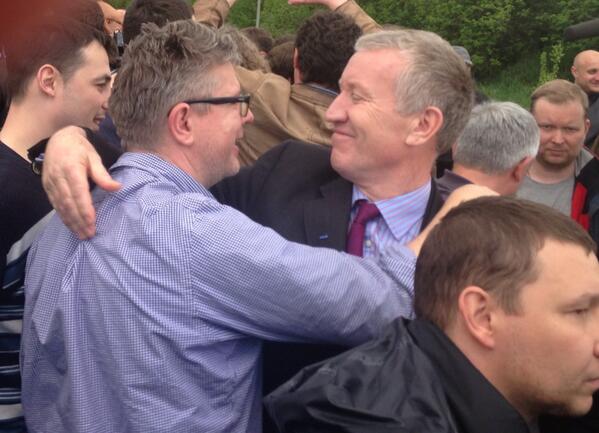 Read: Ukrainian assault on rebel stronghold after 46 killed in fire

Pro-Russian separatist leader, Vyacheslav Ponomaryov, has confirmed that Western observers have been freed in the eastern Ukrainian town of Slaviansk and that there were no conditions for their release.

He said: "As I promised them, we celebrated my birthday yesterday and they left. As I said, they were my guests."

He confirmed that 12 people had been released, including Ukrainians and Europeans.

Military observers held hostage by pro-Russian separatists in the eastern Ukraine town of Slaviansk have been released, the OSCE confirmed.

The OSCE observers detained in the Ukrainian town of Slaviansk by pro-Russian separatists have been freed, news agency RIA reports citing the Russian envoy.