College schools in California have continued their vigils and prayers for those who were killed by British born killer Elliot Rodger.

Families have again called for the mass shootings to end, reigniting a debate about mental illness and gun laws across America.

More: British-born gunman 'convinced US authorities he was no threat'

A day of mourning to remember the the six victims of British-born gunman Elliot Rodger will take place later today.

Rodger, 22, stabbed and killed his college room-mates before embarking on a shooting spree on Saturday after emailing a chilling 141-page manifesto outlining his intentions.

All his victims attended the University of California at Santa Barbara (UCSB) which is planning a memorial wall in their honour.

In a letter to students Chancellor Henry T Yang and Interim Executive Vice Chancellor Joel Michaelsen said: "On Tuesday we will remember and honour the victims of this horrible event, and come together as an academic community to reflect, talk with each other, and think about the future.

"As terrible as these past two days have been, they make us believe in our students and the entire UCSB community more than ever."

A friend of US gunman Elliot Rodger's family said the 22-year-old had not been diagnosed with Asperger's syndrome - contrary to reports - but his parents suspected he was on the spectrum.

Read: Elliot Rodger 'convinced authorities he was no threat'

Simon Astaire, a Hollywood talent agent and media advisor, told the Los Angeles Times Rodger's had been in therapy for years and had no friends.

The gunman, who killed six people before apparently shooting himself, played the video game World of Warcraft but was not "obsessed with guns or war games", Mr Astaire said.

He added that Rodger's "was fundamentally withdrawn", shy and did not often look people in the eye.

"The guy on the video [posted online by Rodger's before the shootings] was much more confident, that is a guy I never met," Mr Astaire told the newspaper.

Isla Vista gunman Elliot Rodger convinced deputies that he was not a threat during a welfare check to his home last month, according to the local sheriff.

Family members contacted medical professionals expressing concern about the 22-year-old in April, but a check by police officials apparently left them convinced "that it was all a misunderstanding".

Santa Barbara County Sheriff Bill Brown told NBC News that Rodger was "able to convince them that he was not a threat to himself or to anyone else at the time".

He said the county's mental health and law enforcement services hoped to learn from the failure to prevent the tragedy.

Surveillance footage of the moments Elliot Rodger opened fire at a deli in Isla Vista, California, has been released.

The video broadcast on ABC in the United States shows customers queuing at a cash register before ducking to the floor.

CNN said the video also shows the moments victim Christopher Martinez, 20, ran inside and was hit by bullets before his friends performed CPR, however the footage was not broadcast.

The parents of British-born Elliot Rodger desperately searched for him as he carried out a deadly gun and knife rampage in Santa Barbara, California, after they received his chilling manifesto, according to a family friend.

Rodger, 22, emailed a 140-page document to several people, including his parents and therapist, just before the shootings began in the town of Isla Vista on Friday night, family friend Simon Astaire told CNN.

Rodger's mother, Lichin, saw the email at 9.17pm local time and immediately went to her son's YouTube page, where she saw a video entitled "Retribution," that he posted on the day of the killings, Mr Astaire told CNN.

Mr Astaire told the news network Rodger's mother called his father Peter, a Hollywood film-maker, before calling 911 and the parents set off for Santa Barbara from Los Angeles.

On the way to the seaside town they heard there was a shooting and later that night, they found out their son was behind the violence, the family friend said.

Rodger is believed to have shot himself in his car after killing six people with a gun and knife and fighting two gun battles with police.

The aunt of Elliot Rodger has told ITV News it is "shocking" that the 22-year-old was able to get his hands on a firearm when he was clearly in a mentally disturbed state.

Jenni Rodger said although she had only met Elliot on a few occasions and did not know him well, it was clear that he should not have had access to guns.

"It is absolutely shocking that guns in the US are able to get into the hands of sick and disturbed people, she said.

"I just hope that this horrific incident is the catalyst for an end to this ever happening again and a serious prevention of access to guns in the future.

Her call echoed those of the father of Christopher Michaels-Martinez, one of the victims of Rodgers' shooting spree.

The Sheriff's department in Santa Barbara has named the three people shot dead by Elliot Rodger.

The victims were named as Katherine Cooper, Veronika Weiss and Christopher Michaels-Martinez.

Rodger stabbed to death three roommates before embarking on a shooting spree in the Isla Vista area.

Mr Michaels-Martinez's father has hit out at gun control laws following his son's death, calling it "insanity" that so many Americans have died in gun-related killings.

Hundreds have turned out for a vigil after a shooting rampage left six dead in Santa Barbara. Students from University Santa Barbara California held candles after suspected gunman Elliot Rodger stabbed three people to death at his apartment before going on to shoot three more. 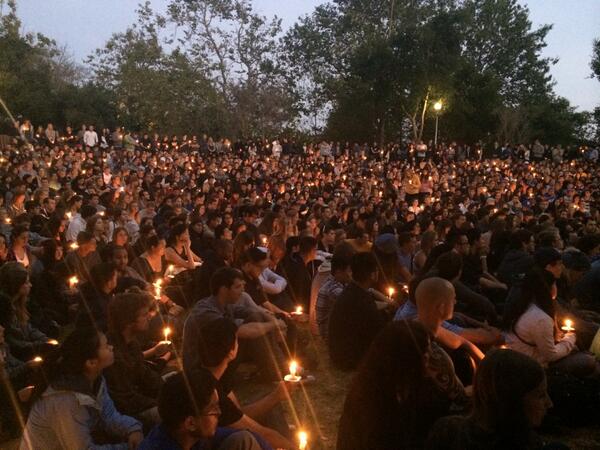 After the senseless tragedy that struck yesterday, today we stand in solidarity. #ucsb http://t.co/Oy0M5Ep6Xy 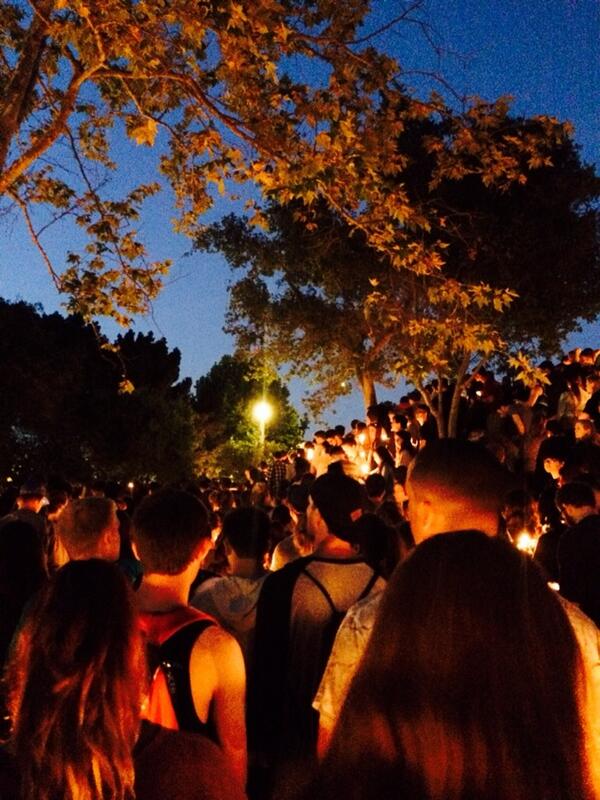 A manifesto left by the suspected gunman who killed six people in a shooting rampage in Santa Barbara, shows the extent of "how disturbed [Elliot] Rodger was", the sheriff's office said.

However, he added that the meeting Rodgers had with authorities did not meet the criteria for him to be held for further psychiatric examination.