The D-Day veteran who caused a furore by sneaking off from his care home to Normandy last week explains why he made the "secretive" journey.

Bernard Jordan has been welcomed back enthusiastically by carers and residents at the care home the 89-year-old escaped to join this week's D-Day commemorations.

Among them was Bernard's wife, who knew nothing at all about his plans but said she was not at all surprised by decision to abscond for the ceremonies in Normandy.

Bernard is now resting up after his adventure. For the record, it is worth remembering that he was never 'banned' from taking the trip, but had just left it too late to join an organised trip - that is why he decided to go it alone and not tell anyone.

Bernard Jordan, the 89-year-old man who left his care home to make his own way to Normady for the D-Day commemorations said he would never imagine his visit would cause a stir. In a statement released as he arrived at home he said:

I want to thank everyone for their kind words and best wishes following my trip to Normandy – I never imagined my visit would cause such a stir!

I'm delighted to be back at home with my wife and the wonderful staff here at The Pines. I was never banned from going to the commemorations, I just decided to make my own way there.

All the men and the women who took part that day 70 years ago are heroes, especially the ones who never came home.

Read more: Normandy great escapee says it is "marvellous" to be back in the UK

Normandy 'great escapee' Bernard Jordan said it was "marvellous" to be back in the UK, following his visit to Normandy to attend D-Day commemorations.

Speaking on his way back to his care home in Hove, Sussex, he said he would "have to face the music" but he was not too bothered. He said:

"Yeah, I will have to face that, but there we are, it is just one of those things in life. You get good things and bad things, and you do your best."

Bernard Jordan smiled to the cameras and waved a triumphant fist in the air as he arrived back in the UK, following his "escape" from his care home to attend D-Day landings in Normandy.

Bernard Jordan on the bridge of the Normandie with the Captain and Purser this morning. #DDay70 http://t.co/kR5oKgAPDu 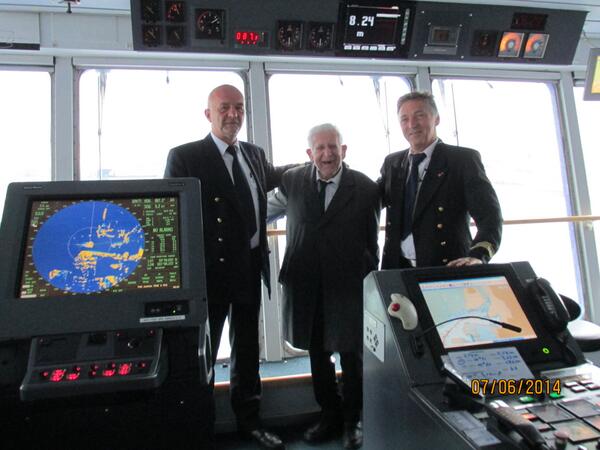 Bernard Jordan, the 89-year-old 'Normandy escapee' who was reported missing by his care home on Thursday night but turned up at D-Day celebrations yesterday, returned home to the UK aboard the Normandie ferry.

Brittany Ferries said they were privileged to carry him, and all the other veterans they have carried on their ships this week.

The D-Day heroes have begun their trips back to Britain today, including Bernard Jordan, who waved from the deck of the Brittany Ferries ship Normandie.

A 89-year-old war veteran found in Normandy after being reported missing by staff at his care home in Hove, Sussex, is making his way home "to face the music".

Bernard Jordan was reported missing on Thursday night by staff at The Pines care home in Hove, Sussex, after embarking on his cross-channel trip for the 70th anniversary of D-Day.

Arriving at Portsmouth he said he had a great time, and intended to do it again next year.

The former Royal Navy officer said that he would have to face the music when he returned to the home. He said:

"Yeah, I'm going to have to face that but it's just one of those things."

D-Day veteran Bernard Jordan, 89, who was reported missing from his care home when he embarked on a solo mission to Normandy, told ITV News he hopes to do the same again next year.

"It was a first class show," he told correspondent Paul Davies.

"I've been here last year, and this time, and touch wood if I'm still about I shall try next year as well."

Ferry staff who met Bernard Jordan on his latest adventure to Normandy have described the veteran as a "game old boy".

"I knew he was a game old boy, he certainly has his wits about him," said employee Sonia Pittam.

"He didn't say much about the landings just how pleased he was to be on board and couldn't believe how everyone was looking after them."

"All the people waving on the route to the harbour entrance - he kept saying all this for us?"