The Egyptian president will not interfere in court rulings that sentenced three al Jazeera journalists to seven years in prison amid and international outcry.

Abdel-Fattah el-Sissi speaking in a nationally televised speech during a military graduation ceremony, said Egypt has an independent judiciary and urged people to stop commenting on or criticising rulings by courts.

"We will not interfere in court verdicts," he said.

BBC staff and journalists taped their mouths up during a protest in London today to express their outrage at the imprisonment of Al-Jazeera journalists Peter Greste, Mohamed Fahmy and Baher Mohamed.

Hundreds of supporters stood outside their office with many carrying papers saying "#FreeAJStaff" while hashtags including #journalismisnotacrime have been trending worldwide.

Radio 4 presenter Julian Worricker said the protest was really important because they represented all journalists.

He said: "They were just doing their jobs and they end up jailed for seven years. There by the grace of God go all of us."

Newly elected Egyptian President Abdel Fattah al-Sisi has said he would not interfere with judicial verdicts, following an international outcry over lengthy prison sentences given to three Al-Jazeera journalists this week.

Sisi said Egypt's authorities would respect the independence of the judiciary.

He added: "We will not interfere. We must respect judicial rulings and not criticise them even if others do not understand this."

A minute's silence was held in London today in protest at the sentence of three Al-Jazeera journalists who were each jailed for seven years in Cairo on Monday.

Hundreds of journalists and supporters gathered at BBC's New Broadcasting House this morning.

Silence outside the BBC for the Al Jazeera 3 http://t.co/mgZP0T178G 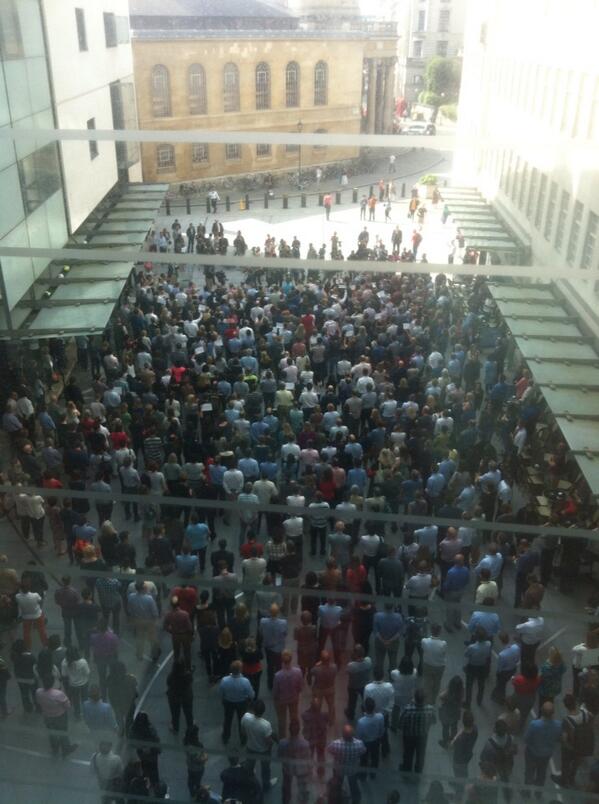 While Sima Kotecha, a BBC reporter on the Today programme, tweeted this.

#journalismisnotacrime A minutes silence outside #BBC in protest of 3 journalists detained in #Egypt http://t.co/3y99Q80F9J 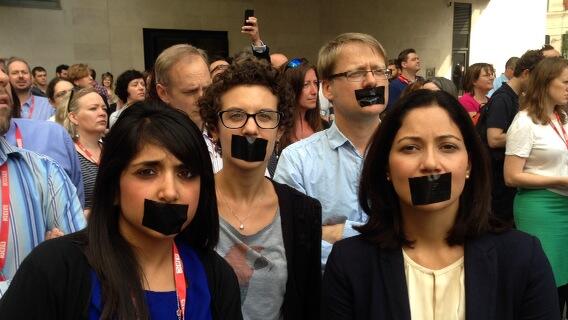 The minutes silence was also observed worldwide. Abdullahi Sheikh, a BBC journalist based in Nairobi, tweeted this calling for the men's release.

Earlier as we, the #BBC in Nairobi, observed 1 min of silence for AJ journos jailed in Egypt #journalismisnotacrime http://t.co/golXHaM4wy 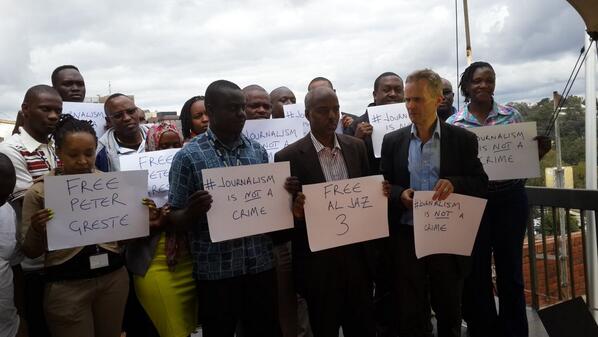 Australian Prime Minister Tony Abbott says he hopes to ensure Peter Greste's return from Egypt "as soon as possible" after the journalist and two colleagues were jailed in a widely-criticised court ruling on Monday.

"We're obviously shocked, dismayed, really bewildered by the decision of the court in Egypt," he told the Associated Press.

Mr Abbott added that while his country respects the legitimacy of the Egyptian government "it is important that there be due process" and that "decisions be made on a fair and just basis".

He said he had a "very constructive discussion" with Egypt's president Abdel-Fattah el-Sissi on the issue this weekend.

The jailing of three Al-Jazeera journalists in Egypt has prompted an international outcry - with Britain and the US among those calling for a pardon.

The parents of Australian journalist Peter Greste have said they are determined to continue their battle until he and his colleagues are released from an Egyptian jail.

Speaking at a press conference in Brisbane after his son and two others were sentenced to several years in prison, Juris Greste said: "This is a very dark time, not only for our family but for journalism generally."

Repeating "our son is not a criminal", Mr Greste said the court's verdict was a "slap in the face and a kick in the groin to Australia as well as all fair-minded people around the world".

Mr Greste's mother Lois said they had not spoken to their son following the verdict,

Egypt has strongly rejected foreign criticism of its judicial system and interference in its affairs after a court decision to sentence three al Jazeera journalists to seven years or more in jail raised an international outcry.

Leader of the Opposition Ed Miliband has called the jailing of three al-Jazeera journalists in Egypt over allegations of terrorism "unacceptable" and has urged Cairo to address concerns over press freedom in the country.

After the totally unacceptable jailing of journalists in Cairo, Egyptian govt must urgently address growing concerns about press freedom.

In a statement, Pillay said that Egypt should release three al-Jazeera reporters jailed for seven years earlier in the day after being convicted of helping a "terrorist organisation", and she accused Egypt of "crushing" the media.