A cheeky young lad from Northern Ireland grabbed a selfie with the Queen today on her visit to St George's Market in Belfast.

This was the moment a young boy attempted a photograph with the Queen.

Getting his phone ready before she approached, the young boy snapped himself with the monarch, before being pushed out of the way by Royal security.

More: Queen and Prince Philip visit the set of Game of Thrones during Belfast visit

The Queen and Prince Philip met cast members on the set of hit show Game of Thrones today, during their Royal visit to Northern Ireland.

A young boy attempted a photograph with the Queen on his mobile phone today during her Royal visit to Northern Ireland.

The Queen and the Duke of Edinburgh were enjoying a visit to St George's Market when the young boy jumped in front of her and attempted to take a 'selfie'.

Video: Boy's selfie with the Queen captured during Royal visit

The Queen received a different kind of throne today when she visited the set of hit show Game of Thrones in Belfast.

She was given a miniature Iron Throne to mark her visit - although it has yet to be established whether Her Majesty is a fan of the gory fantasy epic.

The Queen is presented with a miniature #IronThrone during her visit to the @gameofthrones set #QueeninNI http://t.co/yIbwvlQs8W 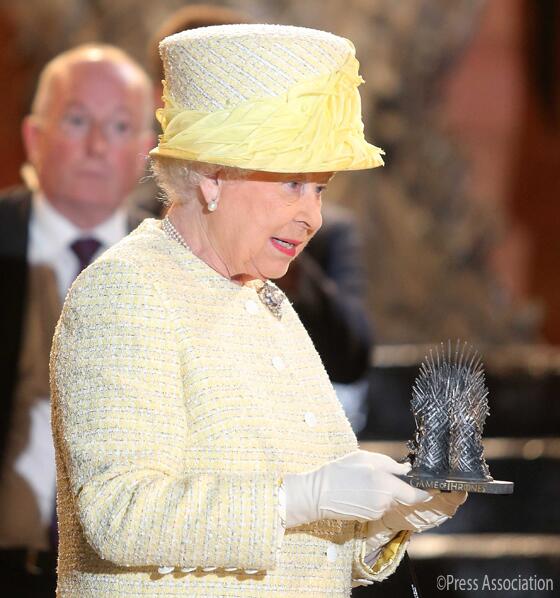 The Queen chatted to cast members from hit show Game of Thrones as she toured the set in Northern Ireland.

Her Majesty also checked out props from the programme and inspected the Iron Throne that various dynasties battle for in the epic saga.

The Queen has arrived at a notorious former jail in Northern Ireland on the second day of her three-day visit.

Her Majesty was greeted by crowds waving Union Jacks on the side of the road leading up to Crumlin Road Gaol.

Read: Queen and Duke to visit Game of Thrones set

The Sinn Fein veteran and former IRA commander described his ten minute private audience with the monarch at Hillsborough Castle in Co Down as "very nice" and "useful".

It was the Queen's third encounter with Mr McGuinness but their first on an individual to individual basis, an event that some see as an effort to 'normalise' relations between Irish republicans and the British establishment in the post conflict era.

The Queen and the Duke of Edinburgh will visit one of the few thrones in the British Isles that does not belong to them - by taking a tour of the Game of Thrones set in east Belfast.

Game of Thrones follows the epic battle for the Iron Throne, as north fights south in a dynastic civil war based on the Wars of the Roses.

The Royal Couple will tour the Painthall studios in the city's regenerated docklands where much of the popular HBO series is filmed.

Northern Ireland is fast developing an international reputation as a leading filming destination, with the powersharing administration at Stormont offering attractive incentives to producers to film in the region.

Game Of Thrones is estimated to be the biggest TV production in Europe and its first four seasons have been credited with bringing a direct economic benefit of £82 million to Northern Ireland, creating the equivalent of more than 900 full-time and 5,700 part-time jobs.