A shabby day's work which Cameron will live to regret http://t.co/M9SN100PE1 via @mailonline

Mr Gove was moved from his education post to Chief Whip in yesterday's reshuffle, with the Prime Minister claiming he wanted "one of my big hitters, one of my real stars" in the position ahead of next year's General Election.

The Chief Whip also played down suggestions he was demoted, saying: "Demotion, emotion, promotion, locomotion, I don't know how you would describe this move - though move it is."

He also claimed Mr Cameron gave him the option of staying as the Education Secretary.

More: Cameron orders Gove to act as 'minister for TV'

David Cameron and Michael Gove have both dismissed speculation that the former Education secretary had been demoted, despite losing his status as a full Cabinet member and taking a £36,000 pay cut. 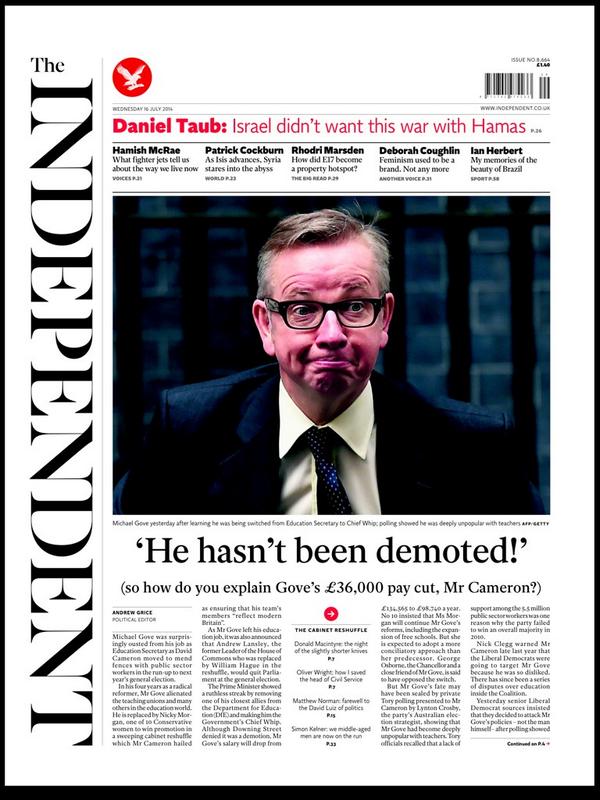 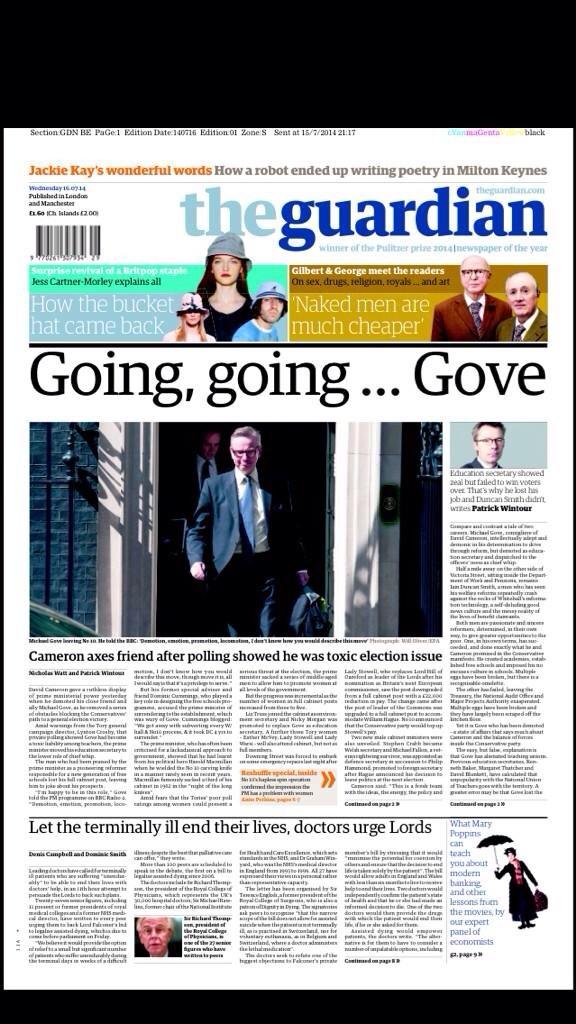 More: Cameron orders Gove to act as 'minister for TV'

The new role for the former Education secretary would be to promote the Government's message in broadcast interviews to fire up votes before the General Election.

Mr Cameron and Mr Gove both dismissed speculation that he had been demoted, despite unions expressing glee after he lost his status as a full Cabinet member and took a £30,000 pay cut.

More: PM hails Gove as 'one of my real stars' despite move

Some teachers reacted with glee to Michael Gove's departure from the Department for Education.

One headteacher in Guildford said his staff "just cheered" when they heard the news.

But another former Education Secretary, Lord Baker, said conflict came with the territory and it was "never easy" for a reforming Secretary of State.

Michael Gove has said that it was his decision to move aside from the role of Education Secretary in the latest ministerial reshuffle.

Asked on Sky News whether David Cameron had given him a choice about moving to become Chief Whip, Mr Gove said: "Yes, he did."

He said part of his new responsibilities would be making sure voters know there is a "straightforward choice" between Ed Miliband and Mr Cameron to be the next Prime Minister.

"Under David Cameron, our long-term economic plan will be secured. Under Ed Miliband many of the gains that we have made will be put at risk," Mr Gove claimed.

Michael Gove has said he has "no idea" what his salary will be in his new role of Chief Whip.

The former Education Secretary is set for a pay cut of almost £36,000 after David Cameron's latest reshuffle.

Speaking to Radio 4's PM, Mr Gove said: "I have no idea how much I'll be paid and it makes no difference to me."

He also brushed off suggestions that he had been demoted.

"Demotion, emotion, promotion, locomotion, I don't know how you would describe this move - though move it is," he joked.

Michael Gove has paid tribute to his successor as Education Secretary, describing Nicky Morgan as "one of the most intelligent" people he has worked with in government.

The Education Secretary also told ITV News Political Editor Tom Bradby his new job as Chief Whip meant he could play a role in ensuring a future Conservative government would be "a genuinely reforming government and also a genuinely socially progressive government".

Read: PM hails Gove as 'one of my real stars' despite move

Michael Gove has said he is "very excited" about his new role as Chief Whip, although he admitted he felt a "sense of sadness" about leaving the Department for Education.

Speaking to ITV News Political Editor Tom Bradby, Mr Gove said he had talked to David Cameron last week about the move and he was "delighted to take up that task".

He also indicated that he had been involved in other ministerial reshuffle moves, saying he had "played a role over the course of the last week with the Prime Minister and with the Chancellor" in making sure "the right people" were in place for the Conservatives.

Outgoing Education Secretary Michael Gove will be paid at minister of state level, £35,825 less than his current salary, the Prime Minister's spokesman has confirmed.

Mr Gove will receive a total £98,740 salary rather than the £134,565 he previously received as Education Secretary.

"He will received the same salary as the previous Chief Whip which is a minister of state salary," the spokesman said.

David Cameron has hailed outgoing Education Secretary Michael Gove as "one of my big hitters, one of my real stars" and said he was pleased to have moved him into one of the most important jobs in government.