A charity appeal page set up by a victim of flight MH17, who was originally from Leicester, has passed the £10,000 mark after attracting new donations following his death.

More than 650 people have donated to the Kidasha charity on the JustGiving page set up by 20-year-old Richard Mayne.

Richard set up the appeal in January before travelling to Nepal for voluntary work in March.

Kidasha, which helps families living in poverty in Nepal with healthcare and other needs, said the proceeds from the page will be used to help repair a shelter Richard spent time at in Nepal.

"Richard was an incredibly enthusiastic and caring member of the group, who spent time organising art activities and games with children attending a drop-in centre for children living in one of the many slums in and around Pokhara, Nepal's second largest city."

The nephew of a British man who died on downed flight MH17 has said scenes of victims' bodies being thrown onto trains in Ukraine were "tough to swallow" as "their dignity has been lost".

Jordan Withers told Good Morning Britain he was still unsure whether the body of his uncle, Glenn Thomas, was on the train travelling to Kharkiv, whether his remains would be identified.

He said: "We still don't know if it's on that train ... We just want to know if Glenn's body is going to be coming back to us as soon as possible and then we can begin the grieving process.

"It's just been such a whirlwind, we've had no time to reflect or grieve or mourn, and I don't think you can actually do that until you get closure on what has happened."

Newcastle United will warm up for a pre-season friendly in New Zealand today wearing T-shirts in memory of John Alder and Liam Sweeney, two fans who died on MH17 travelling to watch the match.

#NUFC will warm up in special T-shirts against @sydneyfc today in memory of John Alder and Liam Sweeney. http://t.co/bpkyIPgDKT

Wreaths were laid on the seats at the stadium in Dunedin where the two fans would have sat.

Manager Alan Pardew and captain Fabricio Coloccini will also lay wreaths on John and Liam's seats ahead of kick-off. http://t.co/VqjIUZdr5B 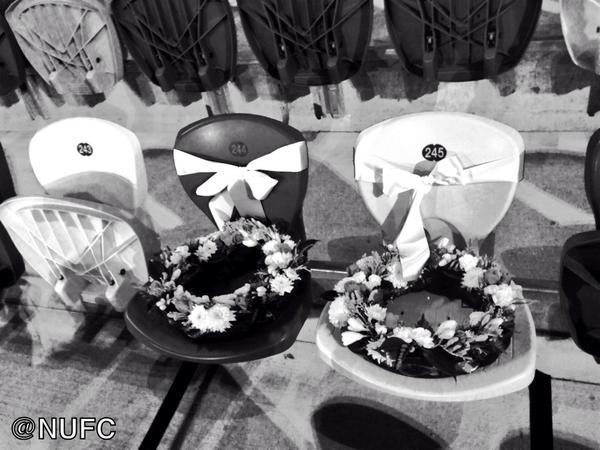 The families of victims of the MH17 air disaster have expressed their anger and frustration with the apparent chaos at the scene of the crash that has stopped their loved ones coming home.

ITV News Correspondent Dan Rivers speaks to some of those who have suffered losses in the disaster.

Sunderland fans have now raised more than £25,000 for a tribute to two Newcastle supporters killed on the downed MH17 plane.

Traditionally bitter local rivalries have been put aside by the Wearside club in the aftermath of the tragedy.

A post on the Sunderland forum Ready To Go shows that the fans had originally hoped to raise around £100 for a floral tribute.

But a crowdfunding page shows that the £25,000 milestone has been reached after just two days.

John Alder, 63, and Liam Sweeney, 28, were both travelling to New Zealand to watch Newcastle's pre-season tour when their plane came down over Ukraine.

The nephew of one of the British victims of the Ukraine plane disaster said the family is anxiously waiting to hear when they will get his body back. Jordan Withers, whose uncle Glenn Thomas was killed in the crash last Thursday, said the uncertainty was making their pain greater.

He told ITV News Reported Ben Chapman the family want the body home, and want an investigation into what happened as soon as possible after that. He said:

"The blame game should not even come into it yet. Let's just get the bodies back and then we can have an investigation and justice can take its course, after that."

John Alder and Liam Sweeney were killed when the flight they were travelling in came down as they traveled to watch the team play in New Zealand.

Newcastle United manager Alan Pardew said the forthcoming season will be dedicated to the fans.

The father of Liam Sweeney, one of the British men killed in the Ukraine plane disaster, has called for his son's body to be released and returned home to the family.

Paying tribute to his son on Good Morning Britain, Barry Sweeney said it had been hard for him to watch the news coverage of events in Ukraine, particularly the body bags, as he did not want to imagine his son alone, "without a hug" in the wreckage of the site.

The bodies of the victims are being held in refrigerated train cars in Torez, the OSCE said, 9 miles away from the site.

It is unclear whether all the bodies have been recovered as the area is being controlled by pro-Russian separatist fighters.

Here are the 10 Britons who died on Malaysia Airlines flight MH17.