There were celebrations and commiserations today as hundreds of thousands of pupils in England, Wales and Northern Ireland received their GCSE exams results.

The proportion of students receiving A*-C grades in their GCSE exams has risen for the first time in three years.

A student whose dyslexia is so severe she did not learn to read or write until she was 10-years-old has achieved an A* in her English literature GCSE.

Holly Sayer also gained an A in English language in her results which totalled 10 GCSEs including two A*s, three As, two Bs and two Cs.

The 16-year-old, who studied at the Ark Charter Academy in Portsmouth, Hampshire, said: "There was a lot of stress involved and now I am really happy."

"Personally, I'm quite heavily dyslexic and yet my favourite subject is English. "The only way I could get round it was through the extra-curricular help that I was given."

She added: "I feel just a little bit chuffed, I think the hard work has most certainly paid off."

Sayer, who hopes to one day become a film director now hopes to complete her A-levels and go to Cambridge University or an Ivy League college.

Schools Reform Minister Nick Gibb said that changes to the exam system that are behind today's "variable" GCSE results are in the best interests of the pupils.

An exams system had developed that worked against the best efforts of teachers and the best interests of pupils.

These results show our plan for education is correcting that.

The number of children now taking exams at the right time, the number studying for academic GCSEs and the higher standards achieved are hugely encouraging. 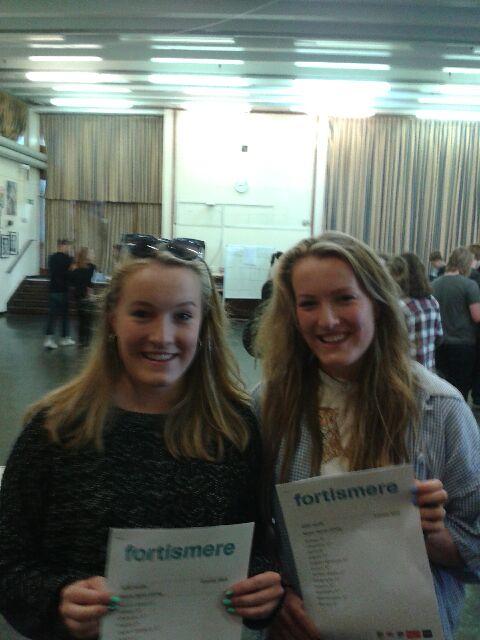 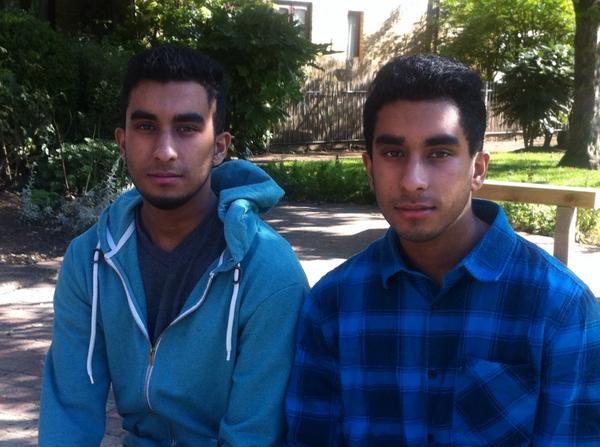 Hampstead School twins Kenny and Taiwo celebrate with As in maths. They both want to be videogame developers. http://t.co/GmY1hkQFM8 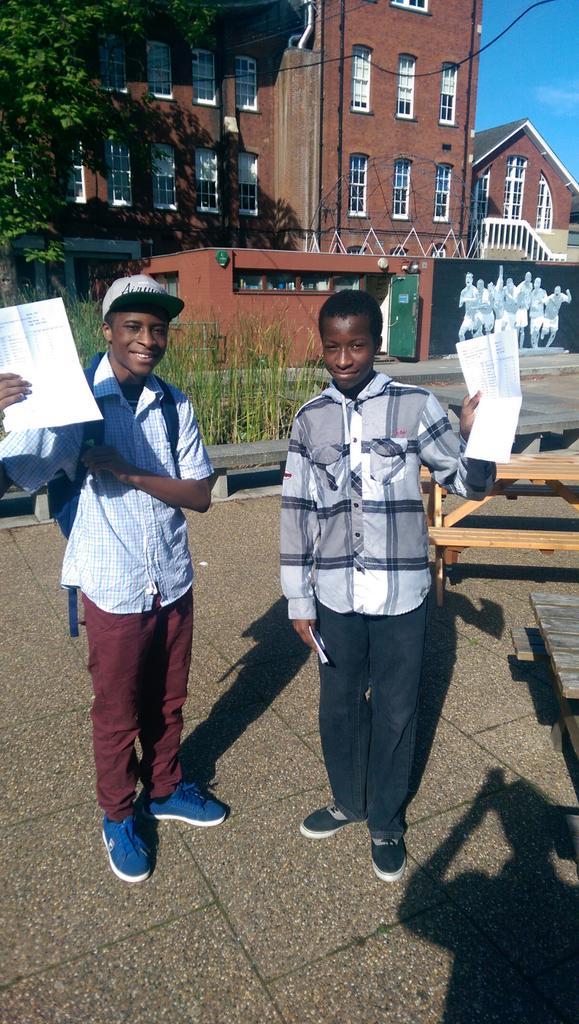 The biggest impact on this year's GCSE results have stemmed from changes that mean students did not sit exams early, compared to previous years when pupils could take GCSEs multiple times, exam chiefs suggested.

This year, only a teenager's first attempt at an exam would count in school league tables, so schools that had traditionally made use of the winter exam season, entered pupils early, or made use of resitting are likely to have seen the greatest changes.

There has been a significant amount of change to the system this year and although UK level figures are relatively stable we expect more schools and colleges to see volatility in their results. The extent of this volatility will depend on how much change from their usual practices they experienced and how they adapted.

Entry patterns are very different this year. We have seen a dramatic decline in the number of entries from 15-year-olds, which is largely due to a change in the school accountability measure, where a candidate's first entry counts in performance tables, and the move to end-of-year exams in England.

As we would expect, where the change in entry patterns is greatest, such as the sciences, English and maths, we have seen some impact on results. But despite these changes and the potential for increased centre volatility, candidates can be confident that standards have been maintained.

Today's GCSE results show that girls once again lead pass rates at grade C and above, with 73.1% of girls' entries scoring A*-C compared with 64.3% of boys'.

However, official results showed that boys are beginning to close the gap at A*, with 5.2% of entries scoring the top grade compared with 8.1% of girls'. The difference of 2.9 percentage points is down from three percentage points last summer.

The proportion of GCSE exam students awarded at least a C grade has risen for the first time in three years, official figures show.

Just over 68.8% of exam entries scored A*-C - up 0.7 percentage points on last summer, statistics published by the Joint Council for Qualifications (JCQ) show.

In maths, 62.4% of students were awarded an A*-C grade - a significant 4.8 percentage points on last year's results.

Exam chiefs suggested that changes to this year's entries, including fewer lower-performing 15-year-olds taking the GCSE early, are behind the hike.

In contrast, 61.7% of English entries scored a C or higher, down 1.9 percentage points from last summer.

The drop - believed to be the biggest in the qualification's history - could be down to strong candidates taking advantage of the chance to sit the exam last winter, the JCQ suggested.

The proportion of entries awarded an A* - the highest grade - has dropped to 6.7% from 6.8% last year. It is the third year in a row that the number of students achieving the top pass rate has fallen.

Schools preparing to receive their GCSE results today have been told to expect "variable" grades.

There are particular concerns among some headteachers about English and maths grades, according to initial reports.

The potentially unpredictable results are said to be due to significant alterations to the qualifications this year.

Brian Lightman, general secretary of the Association of School and College Leaders, which represents a large proportion of secondary heads, said: "We are getting some individual reports of volatility, but we don't know about overall trends yet.