The mother of a US hostage being held by Islamic State militants has urged their leader Abu Bakral-Baghdadi to use his "authority" and free her 31-year-old son.

Mother of US hostage Steven Sortoff appeals to #ISIS leader al-Baghdadi “to use your authority to spare his life.” http://t.co/SbCANprIge 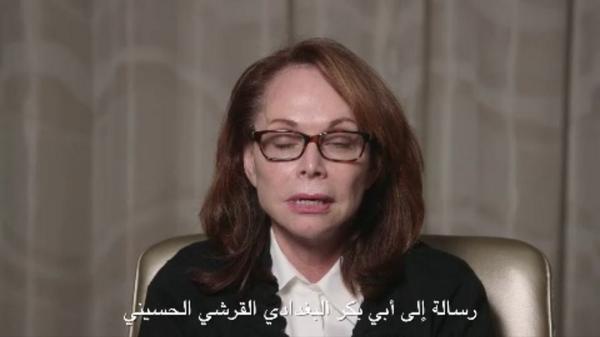 According to the New York Times, Shirley Sotloff addresses Mr. Baghdadi as caliph and calls on him to exercise his right to show clemency, as other previous caliphs have, stretching back to the immediate successors of the Prophet Muhammad.

In an emotional video she says:

As a mother, I ask your justice to be merciful and not punish my son for matters he has no control over. I ask you to use your authority to spare his life and to follow the example set by the Prophet Muhammad, who protected the People of the Book.

– Shirley Sotloff, mother of US journalist held by IS militants

A journalist released earlier this week after almost two years of imprisonment in Syria said he was overwhelmed by the outpouring of attention he has recieved upon returning home.

Peter Theo Curtis, 45, returned to the United States late Tuesday after being released on Sunday.

He was captured in 2012 and held by Nusra Front, al Qaeda's official wing in Syria and rivals to the militant group Islamic State.

Speaking for the first time publicly at a briefing outside his family's home in Massachusetts, he said:

"I am overwhelmed with emotion.

I suddenly remember how good the American people are, and what kindness they have in their hearts -- and to all those people I say a huge thank you from ...the bottom of my heart.

An American man suspected of fighting with Islamic State militants operating in Iraq and Syria has been killed in the Middle East, a US security official has said.

The official, who asked not to be identified, told the Reuters news agency that the FBI was investigating the death of 33-year-old Douglas McAuthur McCain.

A spokeswoman for the US State Department could not confirm media reports that McCain had been killed in Syria but said the department had been in contact with his family and was providing "all consular assistance."

According to NBC News, McCain was born in Illinois and moved with his family to the Twin Cities area, where he graduated from high school in the Minneapolis suburb of New Hope in 1999.

He is said to have later moved to the San Diego area, where he attended community college.

The US has begun surveillance missions over Syria after President Obama vowed to catch the killers of journalist James Foley.

He said: "Rooting out a cancer like ISIL (The US acronym for the Islamic State) won't be easy and it won't be quick. America does not forget. Our reach is long, we are patient and justice will be done."

President Barack Obama has vowed that the US will go after the killers of American journalist James Foley, but said rooting out the Islamic State "cancer" would not be easy.

He said: "America does not forget, our reach is long, we are patient, justice will be done."

He added that he would do whatever is necessary to go after those who harm Americans, at a convention of the American Legion in Charlotte, North Carolina.

He added: "Rooting out a cancer like ISIL won't be easy and it won't be quick," referring to an acronym the United States uses for the Islamic State.

It is a matter of time before Islamic State militants in Iraq and Syria launch an attack on the US or the West, according to a former head of the CIA.

Retired General Michael Hayden told CNN that the group "has the tools" to attack and it had expressed the intent to do so.

He said: "It's at a time of their choosing and it will probably come sooner rather than later..... There is no way more powerful to express their street credentials among the jihadist community than a successful attack against the West."

He added: "Isis is a very powerful local organisation and probably a reasonably powerful regional terrorist organization but it's one that has global ambitions and it has the tools."

The Syrian government must be involved in coordinating any air strikes against Islamist militants in Syria, a government minister said.

Foreign minister Walid al-Moualem said his country was ready to cooperate with international and regional efforts to fight Islamic State (IS), but insisted intelligence must be shared with Syria.

Asked if Syria was ready to cooperate with the United States and Britain, he said: "They are welcome."

The United States has suggested it is considering targeting IS fighters based in Syria.

Footage has been released showing US journalist Peter Theo Curtis pleading for help during his time in captivity in Syria.

In the video, provided by the Associated Press, the journalist - whose release was announced yesterday - says he has three days to live, and urges western governments to act to ensure his rescue.

Warning: Some viewers may find this footage distressing.

Read: US journalist released after two years held in Syria

The mother of US journalist Peter Theo Curtis, who was released after being held in Syria for 22 months, has appealed for captors of the remaining hostages to release them with the "same humanitarian spirit". Nancy Curtis said in a statement:

We are so relieved that Theo is healthy and safe and that he is finally headed home after his ordeal, but we are also deeply saddened by the terrible, unjustified killing last week of his fellow journalist, Jim Foley, at the hands of the Islamic State in Iraq and Syria, ISIS.

I have gotten to know the Foley family during these many long months of uncertainty and worry, and have seen Diane Foley’s bravery and her heroic efforts firsthand, efforts that helped rally the spirits of the families of all the journalists and others being held captive.

An American journalist held in Syria for two years by an al Qaeda-linked group is now safe outside of Syria, National Security Adviser Susan Rice has said. "We expect he will be reunited with his family shortly," Ms. Rice said.