Controversial MP George Galloway has been released from hospital after he was battered and bruised in a street attack, police have said.

The pro-Palestine MP suffered a suspected broken jaw and rib as well as facial bruising when a man leapt at him and punched him after shouting about the Holocaust, his spokesman said.

Controversial Respect MP George Galloway spent the night in hospital after after he was beaten up in the street. The pro-Palestine Bradford West MP suffered a suspected broken jaw, broken rib and bruising in the attack in Golborne Road, Notting Hill, London.

George Galloway MP on his way to hospital last night. The Respect Party thanks all well-wishers. @georgegalloway http://t.co/maDe9dXjXk 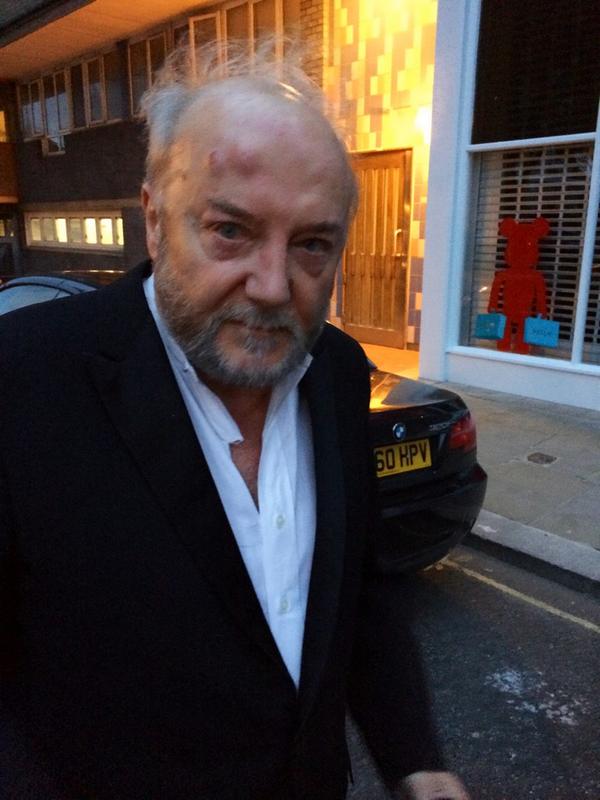 A man was arrested on suspicion of causing actual bodily harm.

Wearing a black jacket and white shirt, Mr Galloway looked defiant in the picture taken in the street as he made his way to St Mary's Hospital, Paddington.

Mr Galloway had been posing for pictures when a man shouted a comment about the Holocaust and attacked him, according to his spokesman. Police were quickly on the scene and made an arrest.

Controversial Respect MP George Galloway was badly bruised after he was attacked in the street tonight, his spokesman said.

Mr Galloway was posing for pictures with people in Notting Hill, west London, when the incident happened.

The spokesman said: "George was posing for pictures with people and this guy just attacked him, leapt on him and started punching him.

"It appears to be connected with his comments about Israel because the guy was shouting about the Holocaust.

"George is badly bruised but OK. He has bruising to his head and face and is in a pretty bad shape."

Metropolitan Police said a man had been arrested on suspicion of ABH and taken to the south London police station where he remains.

The motivation for the attack is unclear but Mr Galloway caused recent offence when he announced Bradford was an "Israeli-free area".