The gunman who shot and killed a soldier near the Canadian parliament made a video saying he was driven by "ideological and political motives", police said.

The clip cannot be released at this time but officers are conducting a detailed analysis of the footage.

Zehaf-Bibeau was shot dead at the scene after killing Corporal Nathan Cirillo, 24.

The attack in Ottawa came two days after a man described as an "IS-inspired terrorist" ran over two soldiers in a parking lot in Quebec, killing one and injuring the other before being shot to death by police.

The body of Canadian soldier Corporal Nathan Cirillo has been taken from an Ottawa funeral home to his hometown of Hamilton.

Cirillo was murdered on Wednesday as he stood guard at the Canadian National War Memorial in Ottawa.

Hamilton police and members of Cirillo's regiment, the Argyll and Sutherland Highlanders, joined his family to accompany his casket home.

The woman who tried to resuscitate Nathan Cirillo as he lay dying at the Canadian National War Memorial has given an emotional radio interview about her experience.

Barbara Winters told CBC Radio she hoped Cpl Cirillo's parents would be comforted to know he had not died alone.

A woman who tried to save the life of Cpl Nathan Cirillo after he was shot in Ottawa has revealed what she told the soldier moments before he passed away.

Lawyer Barbara Winters was at the National War Memorial when Cirillo was gunned down by Michael Zehaf-Bibeau.

"I hope that's some comfort to his parents that he didn't just bleed alone on a sidewalk."

The blockade on the Tomb of the Unknown Soldier in Ottawa has been lifted, allowing mourners and well-wishers to leave floral tributes to Cpl Nathan Cirillo.

Zehaf-Bibeau was himself then shot and killed by Canada's Sergeant-at-Arms, Kevin Vickers.

Police now say they believe Michael Zehaf-Bibeau did act alone, in other words this was the classic lone wolf attack that is so difficult to prevent and to anticipate.

Zehaf-Bibeau was not one of the 93 so-called aspirational jihadist who was actually under active surveillance but he had applied for a passport and that application had been denied.

Police are now saying that it may have been that setback that actually triggered the attack on parliament. In other words it was an act of fury for not being able to join the jihadist struggle in the heartland of Iraq and Syria.

But for counter terrorism officials and for police far beyond Canada, the question is how many others may still try and emulate what Zehaf-Bibeau did here yesterday.

A picture of two dogs owned by Cpl Nathan Cirillo, who was shot and killed at the War Memorial in Ottawa yesterday, shows the pair looking sadly out at the press outside his home. 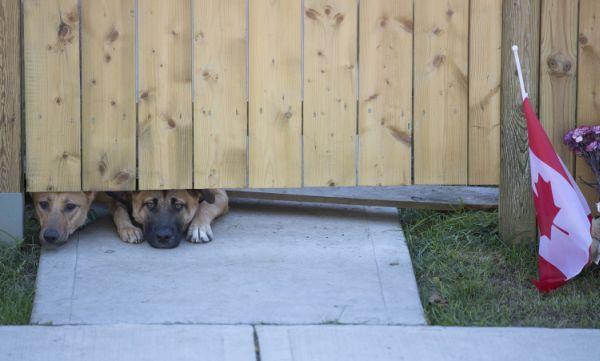 People can be seen running from the War Memorial where Cpl Cirillo was killed before Zehaf-Bibeau arrives.

Zehaf-Bibeau then runs out of a car towards the parliament building, there he carjacks a car from the area where MPs park their vehicles.

In this second car Zehaf-Bibeau drives almost to the door of the parliament building before running inside pursued by police.

He was shot and killed inside the building.

The man that police say was responsible for yesterday's Ottawa attack was not one of the 90 high-risk travellers that the Royal Canadian Mounted Police was investigating.

Police said that Michael Zehaf-Bibeau was a Canadian citizen, but may have had dual Libyan citizenship and had hoped to travel to Syria and acted alone.

Despite the Ottawa attack being the second terror related incident in the country this week police say they have no information linking the two.

Kevin Vickers, the Sergeant-at-Arms who shot dead the gunman in the Canadian Parliament, has paid tribute to the security services who 'pulled together quickly' in the wake of the attack.

I am very touched by the attention directed at me following yesterday’s events. However, I have the support of a remarkable security team that is committed to ensuring the safety of Members, employees and visitors to the Hill. Yesterday, during extraordinary circumstances, security personnel demonstrated professionalism and courage. I am grateful and proud to be part of this team.

I would also like to take this opportunity to thank the Speaker, the Hon. Andrew Scheer, for his leadership and calm demeanour throughout.

On behalf of all members of the House of Commons Security Services team, I would like to extend our deepest condolences to the family of Cpl. Nathan Cirillo. Our prayers are with you. Our thoughts are also with Constable Samearn Son, who has been with the House of Commons Security Services for 10 years. Constable Son suffered a gun shot wound to the leg. He is in stable condition and expected to make a full recovery.

As this is an ongoing investigation, I unfortunately cannot comment any further at this time.

– Statement from the Canadian Sergeant-at-Arms