Police officers came under attack from a small number of protesters during last night's 'Million Mask March', the Met have said.

"Whilst the majority of those taking part were peaceful, there were pockets of violence shown towards officers; with fireworks and traffic furniture including barriers thrown at them," the Met said in a statement.

Chief Superintendent Pippa Mills, the police spokesman for the event, added that protest organisers had "refused to engage" with the authorities, despite "numerous attempts" to make contact before the march.

A total of ten protesters have now been arrested at the 'Million Masks March' in central London, the Metropolitan Police have announced.

Three of the arrests were on suspicion of assaulting a police officer and another three for public order offences.

A man believed to be in his early 20s was also held on suspicion of attempted GBH.

The remaining three arrests were for obstruction (two people) and fireworks offences.

Police clashed with anti-capitalist protesters in central London this evening during the so-called 'Million Masks March'.

There were scuffles in Parliament Square as protesters threw barriers at riot police, who in turn tried to keep the crowd back with their batons.

Police said that as of 10.10pm this evening there had been five arrests relating to the 'Million Masks March' through London.

A man was held on suspicion of a fireworks offence, before being subsequently "de-arrested".

Some masked demonstrators taking part in the so-called Million Masks March in London tonight kicked and dragged over security railings and threw plastic cones and a road sign at police officers.

The protesters chanted "one solution, revolution" as they made their way across Trafalgar Square, Parliament Square and Buckingham Palace.

Russell Brand, who became the face of the Anonymous group's protest in London last November, once again showed his support at tonight's march in the capital. 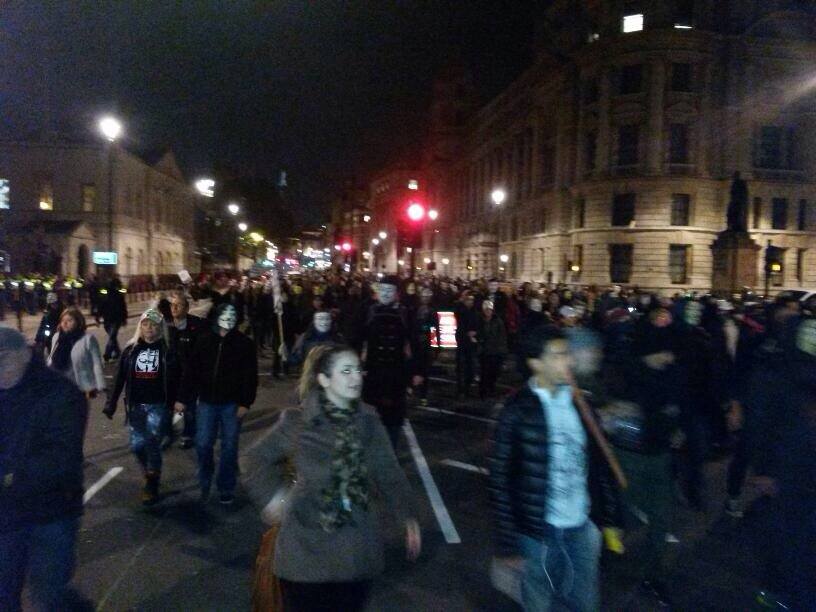 In Glasgow and Edinburgh, demonstrators were seen draped in the Scottish flag.