Eight out of ten Britons feel the economic recovery has had little or no impact on their personal circumstances, new research reveals.

The Ipsos MORI poll for the Evening Standard also found pessimism about the future, with 75% of respondents saying economic growth would have either no impact or "not very much".

The political implications of the survey are potentially interesting, with the Conservatives trumpeting the UK's improved overall economic performance, but Labour arguing that many are not feeling the benefits of growth.

Analysis: Is Ed Miliband the 'manager' to take Labour to victory?

A Conservative minister has hit out at Ed Miliband after this morning's speech, saying the Labour leader still has no plan for the future of the country.

Matthew Hancock, who has a joint brief in the Energy and Business departments, told BBC News:

The problem is for Ed Miliband and for Labour is that they haven’t got a plan to secure Britain’s future. They haven’t got what we call a long-term economic plan and they may blame the media, but it’s people on their own side who are saying that Ed Miliband is not up to the job.

Analysis: Is Ed Miliband the 'manager' to take Labour to victory?

Ed Miliband has responded to Nigel Farage's challenge to a live TV debate, telling the Ukip leader to "bring it on".

.@nigel_farage Bring it on. I look forward to a debate with you, @david_cameron and @nick_clegg in the election campaign.

However, the Labour leader ignored Mr Farage's request for a 'head-to-head debate', referring only to the upcoming party leaders' election debate, which will also feature Nick Clegg and David Cameron.

Nigel Farage has responded to Ed Miliband's attack on Ukip by challenging the Labour leader to a head-to-head televised debate.

In a speech earlier today Mr Miliband made several references to Ukip and told Labour supporters "we can take this lot apart".

This prompted Ukip leader Mr Farage to tweet the following letter laying down his challenge to Mr Miliband. 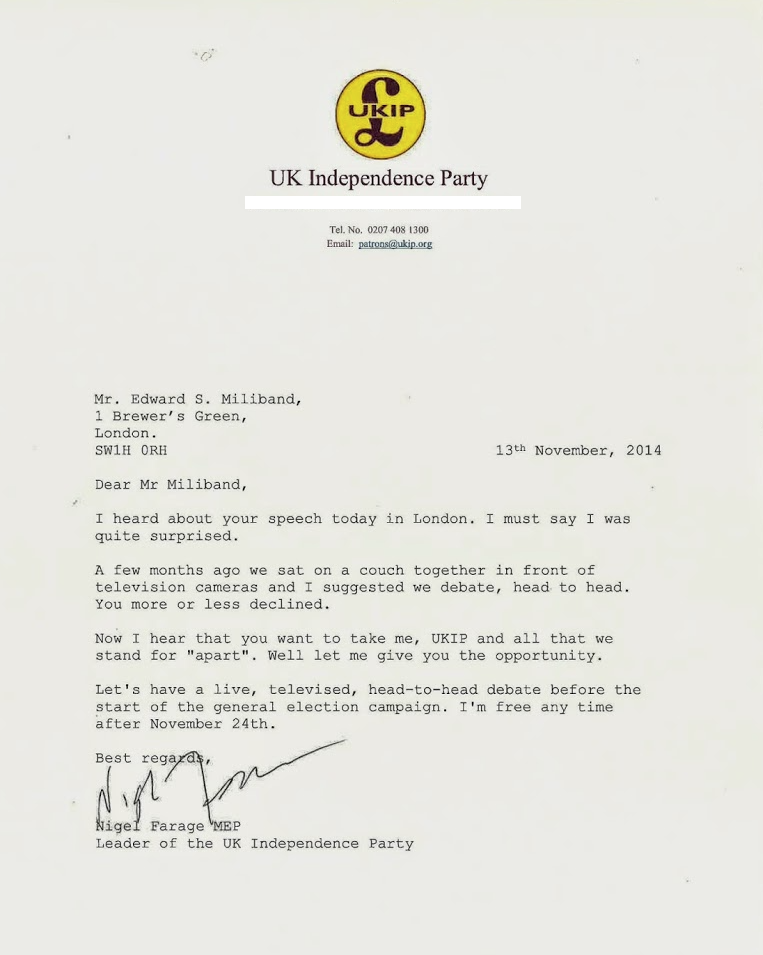 Ed Miliband has declared he is the man to win the General Election, but will the Labour leader make the final whistle?

Ed Miliband has played down allegations that he is unpopular with potential Labour voters, saying that "you don't declare the result of the match until the final whistle."

When asked by ITV News Deputy Political Editor Chris Ship if he was going to acknowledge that many of his MP's say he is unpopular with potential Labour voters, Mr Miliband said that he didn't think this was the case and that he "relished" the challenge.

The Doncaster North MP said that if Labour went out to fight for what they believe in, then his party would win the next general election.

Ed Miliband has said he will not complain about his poor ratings and said he would concentrate on 'changing the country'.

The Labour leader went on to say that he will be repeating his message around the country ahead of the general election next year.

EdM on his poor ratings: I'm not in the whinging business, I'm in the business of changing the country.

EdM: I am going to be doing this again. And again. Right across this country.

Ed Miliband has vowed to "fight for a fairer, more just, more equal Britain" and has urged Labour supporters to join him.

The Labour leader was speaking at the University of London in an attempt to to relaunch his party to the UK electorate.

Ed Miliband has directly challenged the Ukip leader Nigel Farage as he tried to relaunch the Labour party.

Mr Miliband vowed that his party would talk more about immigration but told Labour supporters that they could "take this lot apart."

EdM: we will be talking more about immigration as a party

EdM: Mr Farage, you may want to live in [an unequal] world. But come the general election, I don't believe the people of Britain will follow

Loudest cheer for: Friends, I say we can take this lot apart and it's time we did.

Ed Miliband has insisted he has the "resilience" to cope with the criticism he has faced in recent days and declared that Labour's beliefs will see the party win the general election.

The embattled Labour leader said he had learned the meaning of the phrase "what doesn't kill you makes you stronger" following the latest round of bitter infighting within his party's ranks.