Two removal men who died when balcony railings gave way as they carried a sofa into a home have been named by police.

At least six others, also believed to be removal men, were injured in the incident.

Mr Procko was pronounced dead at the scene. Mr Szymanski was taken to hospital in a critical condition and later died.

The two men killed after a balcony collapsed in central London's Cadogan Square are believed to be removal men who were moving a sofa out of a property, local MP Greg Hands has said.

Mr Hands, the Conservative MP for Chelsea and Fulham, tweeted:

Balcony collapse in Cadogan Sq. Just spoke with Cadogan Ests, not their property, but believe balcony broke when the removal men 1/2

2/2 were moving a sofa out and the combined weight might have broken it. Casualties were removal staff. My thoughts are with their families.

Police have taped off the front of the building in central London's Cadogan Square where a balcony collapsed, killing two men and injuring six others.

According to ITV News' Duncan Golestani the house was undergoing renovations when the 10m high balcony gave way. 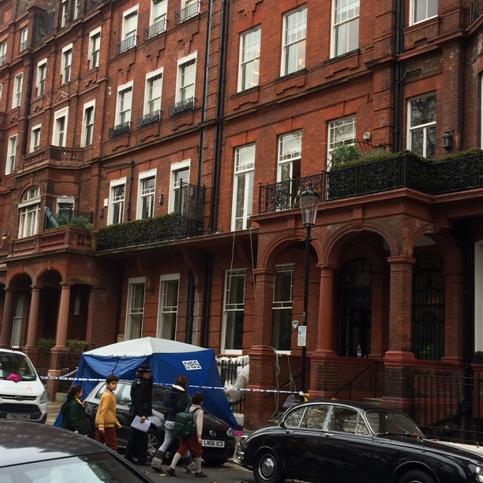 Two men have died and six others injured after a balcony collapsed in central London, the Metropolitan Police have said.

London Ambulance Service earlier issued a statement confirming the death of at least one man and confirmed a second person had been taken to hospital after an incident in Cadogan Square.

It is believed that person has now died.

The ambulance statement confirmed six more people were treated for injuries after their teams were called to the incident just before 10am.

We treated eight patients, every effort was made to resuscitate a patient, but sadly, a man died at the scene as a priority. Six patients were treated for minor injuries but did not need to go to hospital.

One man has died and seven others have been injured after a balcony reportedly collapsed in central London today, London Ambulance Service said.