The Sun newspaper has hailed its victory over Conservative MP Andrew Mitchell in the 'Plebgate' libel case.

It claimed the ex-Government chief whip's defeat would cost him £3 million in costs. 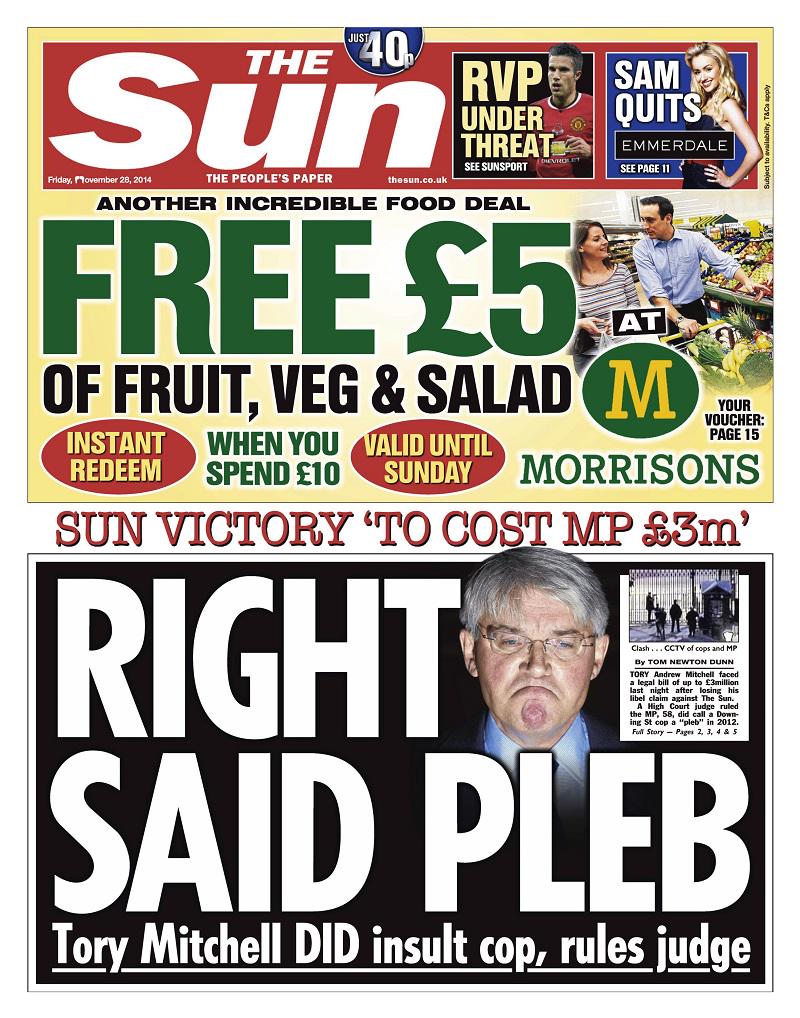 The disagreement over a brief angry exchange between Andrew Mitchell and Downing Street police has ended two years later in a devastating High Court judgement for the former government chief whip.

While Mr Mitchell has been ordered to pay initial costs of £300,000 after his libel action defeat, as ITV News Political Correspondent Carl Dinnen reports, it is estimated the 'Plebgate' case could end up costing him £3 million.

The defeat of Andrew Mitchell's libel action against News Group Newspapers over the 'Plebgate' incident is a "vindication" for The Sun and its journalists, the newspaper's managing editor has said.

We have always stood by our story and continue to do so. We are delighted that the judge has ruled that what we reported about events on Downing Street in the evening in question was the truth and accurate.

There has been a lot of speculation and comment about Mr Mitchell's outburst, and criticism of our newspaper. The judgment today lays all that to rest.

Our article broke this important public interest story, and it has been independently and conclusively confirmed. The Sun can be proud of its journalism today.

Former Conservative MP Louise Mensch has strongly criticised a judge's decision to find against Andrew Mitchell in his libel action over The Sun's reporting of the 'Plebgate' incident, describing it as an "appalling miscarriage of justice".

Ms Mensch, who is a Sun on Sunday columnist, tweeted:

I say again that Andrew Mitchell should be given back his front bench post, stolen from him by police collusion; police jailed for it.

A civil case is a civil case; no way do I believe Andrew at any time used the word "pleb" to police officers. A shocking result.

The police officer at the centre of the Plebgate row has said the "pain" of going through the courts "has been indescribable" after a judge found in his favour over Andrew Mitchell.

Speaking outside the High Court, PC Toby Rowland said he had "huge regret" that "what happened at the gates of Downing Street more than two years ago ended up here".

He said he and his team had tried "everything possible" to avoid court action.

"I am delighted that here again my innocence, integrity and reputation as a police officer has been recognised," he added.

PC Rowland also called for a "line to be drawn" over the incident.

The overall costs of Andrew Mitchell's failed 'Plebgate' libel battle have been put at £3 million, court sources have told the Press Association.

Former Government chief whip Andrew Mitchell has said he is "bitterly disappointed" to have lost his High Court libel action over the "Plebgate" incident.

Speaking outside the High Court, Mr Mitchell said the verdict came after a "miserable two years".

The MP, who has been ordered to pay interim costs of £300,000, said he now wanted to "bring this matter to a close and and get on with our lives".

After the ruling PC Toby Rowland said he hoped a "line can be drawn and everyone can be left in peace".

Former Government chief whip Andrew Mitchell has been ordered to pay interim costs of £300,000 after he lost his High Court libel action over the "Plebgate" incident.

The Police Federation of England and Wales has said it is "pleased" Mr Justice Mitting has ruled in PC Toby Rowland's favour after Andrew Mitchell lost his High Court libel action over the "Plebgate incident".

Toby's name has been cleared and his integrity restored. Toby has conducted himself with dignity and professionalism in relation to this incident and subsequent inquiries and legal cases.

It is important that this incident is now brought to a close to allow Toby and his family to look to the future.

– Steve White, chair of the Police Federation of England and Wales

PC Rowland sued Andrew Mitchell for libel over statements accusing him of fabricating the alleged verbal abuse at Downing Street in 2012.

Andrew Mitchell would have avoided the personally and financially devastating verdict in his High Court libel action if he had shown a "scintilla of humility", his fellow Conservative MP Michael Fabricant has tweeted.

This is a personal tragedy for Andrew Mitchell which needn't have happened if only he had sown a scintilla of humility. #plebgate

If Andrew Mitchell had shown some humility, said he had lost his temper and not sure what he'd said, but was sorry - he'd still be in Gov't.