The Prime Minister has hit out at the other parties saying they would take Britain "back to square one" - as he arrived in Brussels for a European Union summit.

David Cameron said: "When I first came here as Prime Minister five years ago, Britain and Greece were virtually in the same boat. We had similar-sized budget deficits.

"The reason we are in a different position is we took long-term difficult decisions and we had all of the hard work and effort of the British people. I am determined we do not go backwards.

"Listening to other parties' reactions to yesterday's excellent Budget shows they want to borrow, spend and tax more. I say let us build on the success that we've had and not go back to square one."

Danny Alexander, the chief secretary to the Treasury, said a new strict liability criminal offence would be introduced so offshore tax evaders "could no longer plead ignorance" in an attempt to avoid prosecution.

"Strict liability will bring an end to the defence of, 'I knew nothing - it was my accountant my Lord,'" Alexander told the Commons.

He said the Government would also enforce a new offence of corporate failure to prevent tax evasion, so no organisation is allowed "to get away with facilitating or abetting others to evade tax".

Anyone who helps tax evaders will also be handed new civil penalties, Mr Alexander announced, meaning those found guilty will be forced to pay fines that matches the sum of the tax dodged.

During his speech in the Commons, Mr Alexander was met with angry heckling from Labour MPs who accused him of abusing his ministerial office by Labour to set out the Liberal Democrats' "alternative Budget".

George Osborne has revealed he almost spilt his coffee when he saw the The Sun's post-Budget front page. 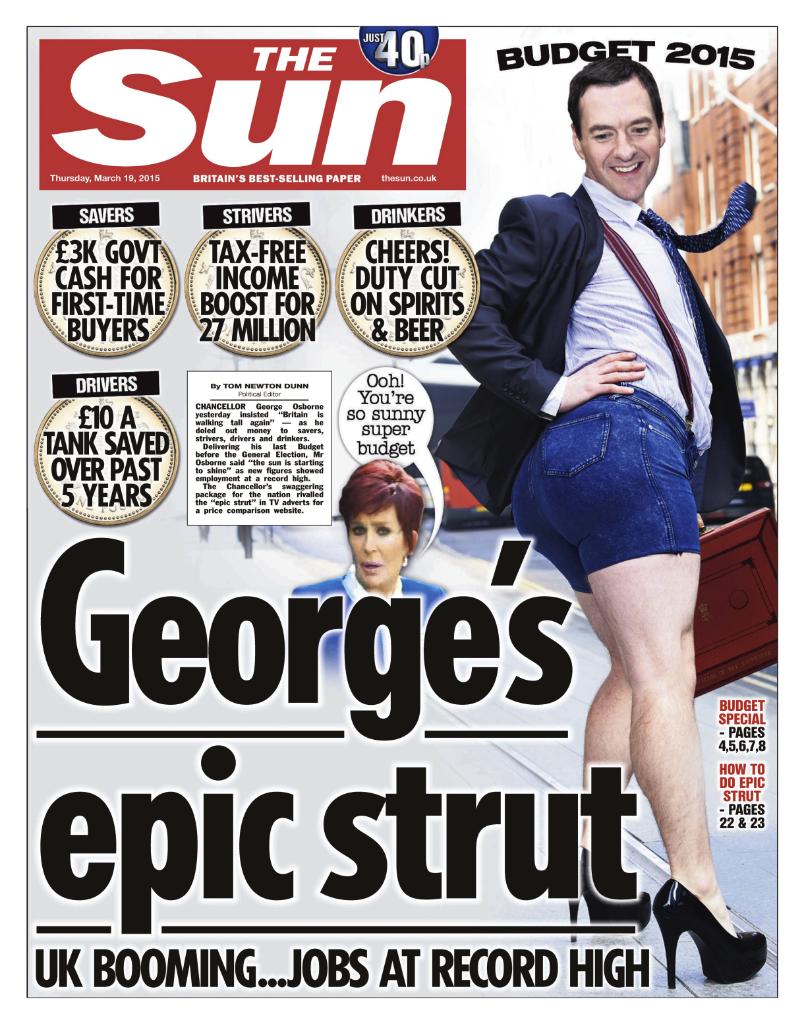 The paper depicted the Chancellor strutting like the "epic" character Dave in the popular TV advert for Money Supermarket, adapting the catchphrase to say: "Ooh, you're so sunny super budget."

Mr Osborne told BBC Breakfast: "I almost spilt my coffee this morning when I read the front page of The Sun.

"What's great is that they have always got a way of bringing life to the Budget and it's the geniuses of The Sun who can come up with that front page."

Labour would not reverse George Osborne's Budget pledges if the party won power in May, Ed Balls has said.

While warning that Mr Osborne's spending cuts was a "pretty scary prospect" for voters, the shadow chancellor said Labour would not scrap measures including the Help to Buy ISA, the £1,000 tax-free savings allowance and the increase in income tax personal allowances to £11,000.

Mr Balls said voters had a big choice at the next election, telling BBC Radio 4's Today programme: "The truth at the election will be, do you want Labour's more balanced, fairer approach to deficit reduction, which focuses on raising wages and being fair, or do you want to go for even deeper spending cuts over the next three years?"

The Chancellor earlier defended his Budget, saying "difficult decisions" needed to be made to ensure vital services like the NHS were protected.

Paul Johnson, the director of the Institute for Fiscal Studies, told BBC Radio 4's Today programme: "In order to meet the Chancellor's aims, you do need some significant and some really quite deep spending cuts in 2016/17 and 2017/18, and then he takes his foot right off the accelerator in 2019/20.

"So you get big spending cuts in the first couple of years and then spending increases right at the end."

Mr Johnson also accused the Chancellor of not giving enough detail about how welfare cuts and a clampdown on tax avoidance would deliver savings.

"I think it's rather disappointing that so far in, we still haven't heard any details about this", he said.

Chancellor George Osborne insists the "difficult decisions" he has made will protect the NHS after delivering his final pre-election Budget yesterday.

Responding to fears about the potential effect spending cuts could have on the health service, the Chancellor told Good Morning Britain: "By taking difficult decisions we are able to protect vital services like the NHS."

The Chancellor said he would have "more" to say about childcare in the coming weeks following accusations he had ignored the issue in yesterday's statement.

He reiterated his message that voters faced a choice at the upcoming election between what he called the "chaos" of Labour or a Conservative plan that is "delivering".

Describing the Chancellor's Budget as "out of touch", Balls said, "This idea that it is going well for people I just don't think fits with our lives."

"Don't forget, a few years ago George Osborne said he was going to balance the books ... and he's failed," Balls said.

"it doesn't have to be this way. We could have had a better Budget for working people that boosted wages and got the economy growing in a more sustainable way - he didn't do any of those things".

Here is what the papers have to day the morning after Chancellor George's Osborne's pre-election Budget announcement.

George Osborne will seek to maximise electoral gain for the Conservatives today after his pre-election Budget was generally well received.

The Chancellor's last Budget before the General Election saw him offer financial goodies to savers and regional voters while he sought to blunt Labour's key weapons.

But Osborne will have to fight Opposition claims that he tried to hide from the public the scale of future spending cuts so deep that the NHS would have to be squeezed or VAT raised.

For people saving to buy a house, the new Help to Buy ISAs could be the help they need to get on the housing ladder more quickly.

But industry experts fear it will do more harm than good by a demand in properties raising the value of properties.