The latest ITV News poll suggests the Conservatives have a four point lead over Labour going into the campaign.

ITV News election analyst Professor Colin Rallings projects they will be some way short of a majority on those figures with David Cameron, or Ed Miliband struggling to form a government.

ITV News UK Editor Rohit Kachroo has been with Nigel Farage as the Ukip leader plans his strategy for the ITV Leaders' Debate on Thursday.

It was, in some ways, a unique election launch, but how it will end is anyone's guess.

The Conservative party will not publish details of their planned welfare cuts until after the General Election, Chancellor George Osborne has said.

Mr Osborne said that they would set out how they intend to achieve the planned £12 billion in savings from the welfare budget if they are returned to power after the General Election.

"We will set out our plans as part of a spending review when you can make these balanced judgments," he told Channel 4 News. "We have said in the spending review in the summer."

Work and Pensions Secretary Iain Duncan Smith came under fire at the weekend after he suggested that it was not "relevant" to explain where the cuts would fall if the Conservatives regained power.

However, Mr Osborne insisted they had shown from their record in the last parliament that they had would protect the most vulnerable claimants

Scotland's First Minister Nicola Sturgeon has called on voters to vote for the SNP to "lock out" the Tories and make for a "more progressive alternative in the House of Commons".

Launching her party's election campaign in Glasgow, Sturgeon said it would be possible to "lock David Cameron out of government" if Labour and the SNP had more MPs than the Tories.

It comes after she called on Labour to "join forces" with the party to ensure the Conservatives do not get elected.

But former Labour prime minister Gordon Brown said the SNP wanted to talk "coalitions and backroom negotiations at Westminster" while Labour would be talking about issues such as the neglect of the NHS and better educational opportunities.

Labour has been forced to defend an advert which appeared to suggest several large companies backed its business manifesto.

It quoted senior figures at firms including Kellogg's and Siemens supporting Britain in the European Union.

But as ITV News Political Correspondent Carl Dinnen explains, some of them are not happy.

With the formalities concluded and Parliament officially dissolved, 38 days of campaigning have begun.

The battle lines have already been drawn with the 'economic chaos' of Labour, say the Conservatives versus the 'clear and present danger' of five more years of David Cameron, says Ed Milband.

The smaller parties could hold the key if there is no clear winner.

And we’re off! All aboard the big-blue-battle-bus, union flag fluttering and a typically dry election slogan stretching across the side.

"We want strong, clear, accountable government and there's only one prime minister and one party that can deliver it so get out there and win it for Britain."

Nick Clegg has met locals in the West Midlands with his party's candidate for Solihull, Lorely Burt.

The Liberal Democrat leader spoke to children as a new scheme to protect hedgehogs was launched.

A project to create the UK's first dedicated hedgehog conservation area was launched as part of efforts to reverse declines in populations of the prickly creature.

Warwickshire Wildlife Trust's scheme, funded by the British Hedgehog Preservation Society, will also work with the local community to raise awareness of the animals' plight and bring in hedgehog-friendly measures such as creating small holes in fences.

.@lorelyburt and @paddyashdown ready on the campaign trail at a wildlife trust to highlight our 5 green laws. http://t.co/9rWMcOqwsl 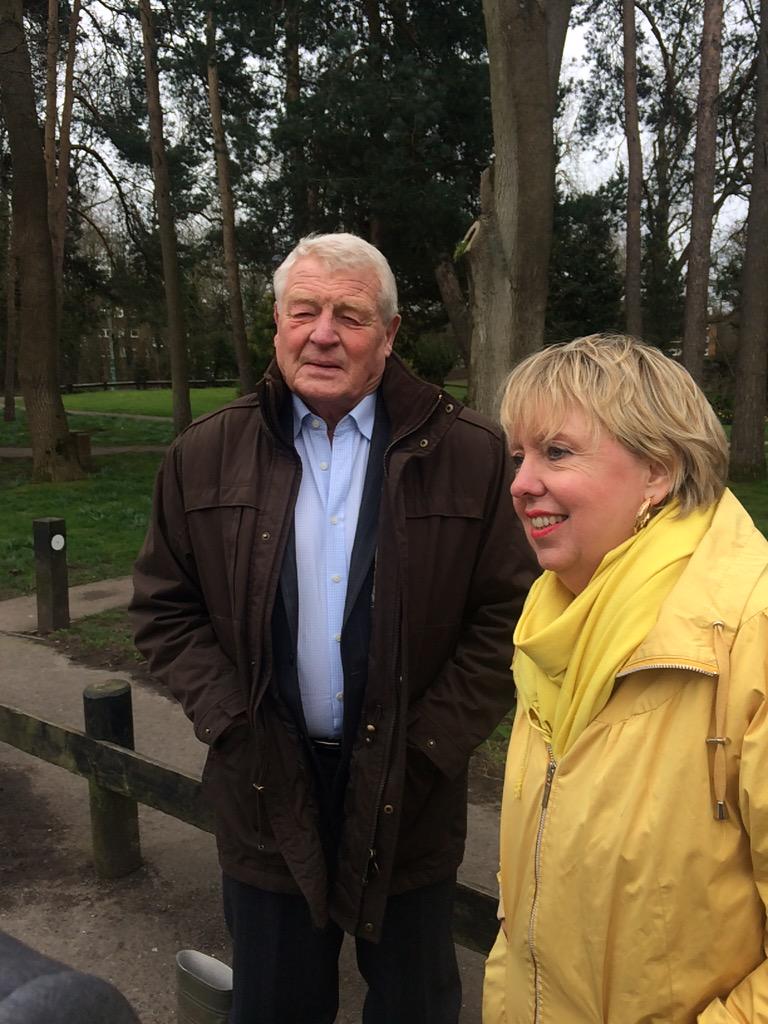