Ed Balls has dismissed a handwritten note left by a former Labour cabinet minister warning that there was no money left as a “joke”.

Ed Balls dismissing the note Labour left Britain as a "joke" is a disgrace. My video: https://t.co/WO0I9ZwJsF

Liam Byrne, who was chief secretary to the Treasury in Gordon Brown’s government, left the stark message in a desk at his former offices in 2010, saying:

"Dear Chief Secretary, I'm afraid there is no money. With kind regards - and good luck! Liam."

Nigel Farage has admitted he is nervous about Thursday's ITV Leaders' Debate, telling reporters at a pub in Dover he has concerns over how host Julie Etchingham will "control" the seven leaders.

Had it been a panel of four, or maybe five, I would have looked forward to it much more, but I think with seven - how on earth she's going to control it I just don't know.

I fear it will generate into a bit of a shouting match as everyone's desperate to make their mark.

He told ITV News UK Editor Rohit Kacharoo that he thought his position in the podium line-up is "Pretty good".

"Tucked inbetween Cleggers and Miliband, that's alright," he said. "It'd be nice to be next to David but I don't think he'd like it very much."

The Ukip leader said that he thought the Prime Minister would be "delighted" with his position at the far end of the seven leaders "far away...from maybe Ed," who he praised as standing up to Jeremy Paxman "remarkably well" in last week's Q&A show.

As if proving they can stand the heat, David Cameron, George Osborne and Nick Clegg all headed to the kitchen today.

Ed Miliband has admitted that his own home may be liable for Labour's proposed mansion tax - and said that would be "fine" with him.

The Labour leader told ITV News Granada that the NHS, tax avoidance and the mansion tax are live issues "on the ballot paper" - to which he was asked about his own home's eligibility for the tax.

"It might well yes, I think it will, I will be paying the mansion tax and that's fine," he said.

Questioned again about his personal popularity and image, Mr Miliband said: "I don't care about the attacks on me, I care what's going to happen to the British people in the next five years."

Visit ITV News Granada for more on this story

When a hotel advertised 30 jobs in Grimsby last week, applicants queued around the town's job centre for a chance to apply.

Following David Cameron's pledge to create two million extra jobs if he is re-elected in May, residents in the East Marsh area of the town tell ITV News Correspondent Damon Green about the challenges of finding work:

Read: How credible is the Conservatives claim to add two million jobs if re-elected?

George Osborne has hailed a "hat-trick of good economic news" - a claim supported by Nick Clegg, who said the Liberal Democrats were a "crucial influence" on the latest figures.

However, Shadow Chancellor Ed Balls countered that working people have been left struggling by the "slowest recovery in 100 years," while Ed Miliband said the Conservatives "just don't get" the lives of British people.

Nick Clegg has that said both Ed Miliband and David Cameron know they will fall short of a majority in the general election.

He made the comments during a visit to the Panasonic Manufacturing site in Cardiff, after claiming yesterday that "the era of single party politics is over".

They will tell you they think they are going to get a majority.

So the question is not who gets a slam dunk result where one party can run everything in the way they want.

The question is how do we make sure we have the right kind of people around the table doing the responsible thing for the country.

The Scottish National Party's (SNP) deputy leader Stewart Hosie has said his party will work together with "allies from across the UK" such as the Greens and Plaid Cymru to end the shared "ideological commitment to austerity" of the Conservatives and Labour.

Mr Hosie said: "Westminster's obsession with austerity is holding back Scotland's economy and damaging communities across the country - pushing 100,000 more children in Scotland into poverty and seeing a 400% increase in people forced to rely on food banks. Austerity is failing on every level and people are crying out for a real alternative."

ONS figures show our economy grew by 2.8% - even faster than first thought - in 2014. Good for businesses & families. http://t.co/O9ofDYjQ4E 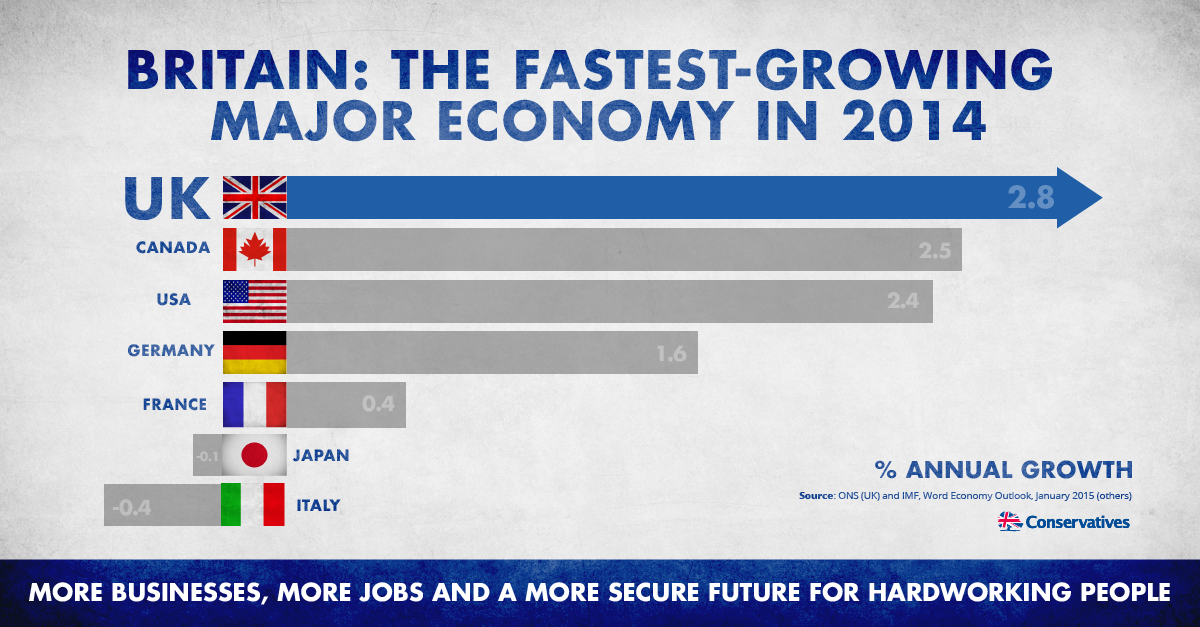 Ed Balls has insisted all of Labour's manifesto pledges would be fully costed and funded as he accused the Conservatives of planning "even deeper cuts in the next three years than we have had in the last five".

The shadow chancellor visited Swindon to set out Labour's plan to cut and then freeze business rates, which he said would save 1.5 million small businesses an average £400.

This would be funded by reversing a coalition cut in the main rate of corporation tax from 21p to 20p, due to come into effect on April 1.

"It's not right to go ahead with the further cut for larger companies when we can use the money in a better way to help us create more good jobs by backing small companies," Balls said.