The way the Conservatives' tried to nail the day's election agenda to the issue of Britain's nuclear deterrent has ended with Labour accusations that they'd descended into the politics of the gutter. The row was about the way the Defence Secretary, Michael Fallon, criticised the Labour leader Ed Miliband.

He said Mr Miliband has stabbed his brother David in the back to get the leadership and was ready to do the same to the United Kingdom over its security. He was claiming there could be some sort of deal with the SNP to scrap our nuclear submarines.

Trident became a major campaign bone of contention today, because of the SNP's declared determination to scrap the nuclear deterrent. Nicola Sturgeon has told ITV News it's a "blood red line" that cannot be crossed, in any future Parliamentary deal with the SNP.

The campaign got nasty today: defence was the theme, but offence was taken. The Tories said Labour would abandon the Trident nuclear deterrent, to cut a deal with the SNP. Ed Miliband would be "stabbing the nation in the back" the Defence Secretary said, just as he'd stabbed his own brother in the back. But Mr Miliband deployed calm fury saying Michael Fallon had "demeaned himself and his office." It was lies and a deceit, said Labour, dragging the campaign "into the gutter".

Defence Secretary Michael Fallon made reference to the Labour leadership contest between Mr Miliband and his brother David, and suggested he would 'stab the UK in the back' over Trident.

Speaking in Kent, he said: "The attack on Ed Miliband was very, very personal, calling him a backstabber.

"I just fear that we have an election campaign that is turning into an American, negative, shouting match between two parties, and I don't think the public like it.

During a visit to Norwich, Ms Bennett said: "A very important issue has been raised in the debate about Trident today but the way in which it was raised is deeply damaging.

"This kind of personalised attack is the kind of Punch and Judy politics that is really damaging our political fabric."

Nick Clegg has told ITV West Country he "can't believe" the Conservatives regard the difference between three and four nuclear submarines is the most important issue facing nation.

ITV News caught up with the Lib Dem leader as he visited Bodmin Hospital this morning. The full interview will broadcast on ITV News West Country later.

The main political parties are wrangling over whether the UK should spend billions renewing its nuclear deterrent.

David Cameron earlier defended Michael Fallon's personal attack on Ed Miliband, but has now said "it's important to be respectful".

Cameron asked by member of public about personal attacks. "I think it's important to be respectful" he says. #GE2015 http://t.co/ZeGZetGoI8 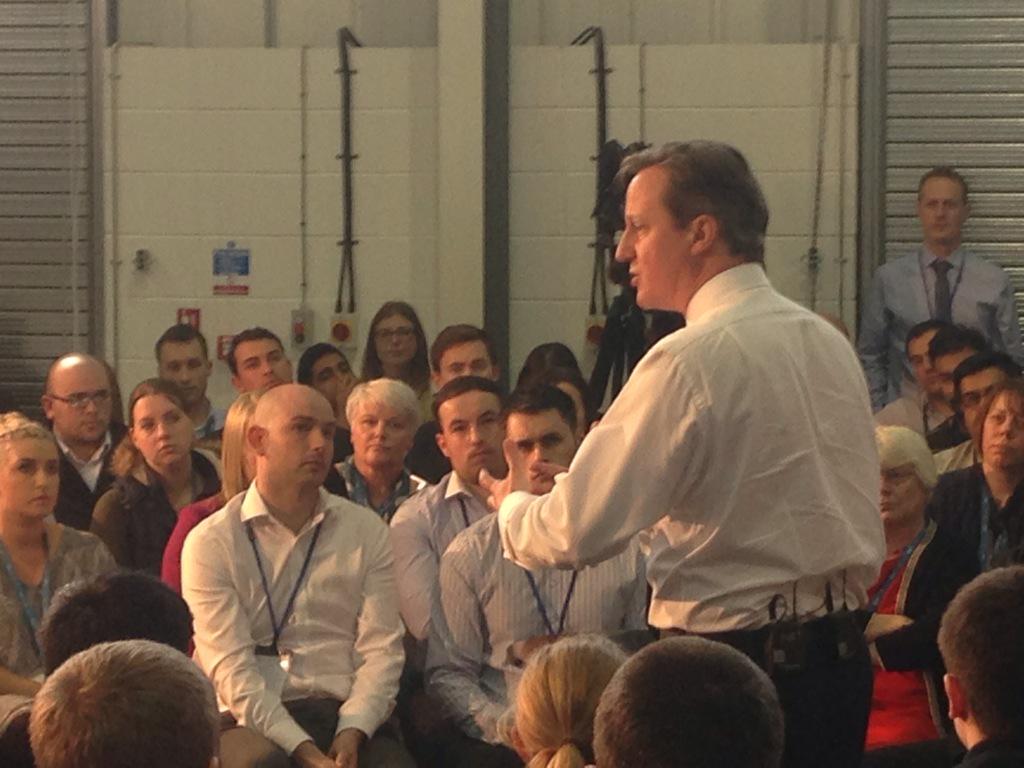 Speaking at a PM Direct event at the National Grid training centre in Nottinghamshire, Mr Cameron was asked about the Defence Secretary's claim that the Labour leader "stabbed his brother in the back" over their 2010 leadership contest.

I think we should try to be respectful in the way we conduct our political debate.

I think, generally speaking, in Britain we are. It is a feisty democracy. We have big arguments, big disagreements.

He added that Mr Fallon had been making a key point about security and was right to "raise it in a pretty frank way, as he did".

Nick Clegg says the reason the Conservative and Labour parties are trading personal barbs is because they are "panicking."

...The reason you're seeing more nasty language is because both parties are panicking they're not going to win a majority.

What the country now faces is the prospect of David Cameron in Downing Street with Nigel Farage and at the mercy of the swivel-eyed brigade on the right of his party, or Ed Miliband at the mercy of Nicola Sturgeon and dancing to the tune of Alex Salmond.

David Cameron has accused the Labour Party of being "in chaos" over its stance on the UK's nuclear deterrent, Trident.

One minute they say they'd have three submarines, the next they say four submarines and all the while, Ed Miliband is not ruling out trying to get into Downing Street on the back of SNP support - and the SNP are saying not replacing Trident is a 'red line' for them.

The Prime Minister also said that he supported Michael Fallon's personal attack on Ed Miliband over the issue.

Earlier the Defence Secretary drew on David and Ed Miliband's 2010 leadership contest and claimed that the Labour leader "stabbed his brother in the back" and would do the same to the UK over the renewal of the ageing nuclear programme.

The Prime Minister responds to a reporter who asks if he stands by Mr Fallon's comments on Mr Miliband:

The renewal of the Trident nuclear submarine fleet has long been a divisive political issue, here is a look at what the main parties believe the future of Trident should be.