The people of Glasgow used to look to Labour for help but today's manifesto pledges were not welcomed by many in the Scottish city today.

At the last General Election, Labour won almost two-thirds of the vote in Glasgow East. The latest polls suggest that support has gone.

The party is now trailing the SNP in the constituency by 14%.

As Labour bids to win voters’ confidence in its economic policy, why has it been so vague on one of its key promises?

Nicola Sturgeon seized on Labour's economic vows in its manifesto today as evidence the party was just "offering more cuts".

Ms Sturgeon said more cuts was the "wrong choice", saying: "Yes we need to get the deficit down but we need to do it in a way and at a pace that also allows us to invest in infrastructure, skills and innovation."

Key voters in the key marginal seat of Wirral in north-west England were left unconvinced by Labour's economic pledges.

Announcing his party's election manifesto in Manchester today, Ed Miliband said Labour would be a government of "responsibility" as he vowed to balance the books.

But as ITV News Deputy Political Editor Chris Ship reports, Mr Miliband's "pledges of prudence were obscured by the perception that last time Labour spent all the money".

Ed Miliband insisted Labour could be trusted with Britain's economy today as he launched his party's election manifesto.

Mr Miliband promised to cut the deficit "as soon as possible", without setting an "arbitrary date", and not to borrow any money to fund policy pledges.

As ITV News Political Correspondent Carl Dinnen reports, Mr Miliband "hopes this will be the moment that changes the election - when Labour becomes the party of fiscal responsibility":

Whether or not Ed Miliband makes it into Downing Street, he did today at least look the part of a Prime Minister in waiting.

Labour's spending plans remain a "big unknown" due to the lack of any clear timeframe on the pledge to erase the deficit, according to an influential think-tank.

The Institute for Fiscal Studies (IFS) said that the lack of clarity on when the books would be balanced meant the party could introduce "significant spending cuts or tax rises" early on, or none at all.

IFS Director Paul Johnson said: "They are committed to getting a current budget balance - a current budget surplus - by the end of the parliament. That's an entirely credible fiscal policy. But they continue to not to give us any sense as to how quickly they want to achieve that.

Johnson added that all the major parties were "just making up numbers" on the amount they could raise by tackling tax avoidance - with the Conservatives claiming £5 billion and Labour claiming £7.5 billion.

Speaking during a visit to a factory in Clacton, Essex, the Ukip leader said: "They have apologised for getting it wrong in the past, which they did, but I don't see anything in their plans which suggest to me that they actually are going to get the deficit down.

"Where are the specific areas they are going to cut spending?" he asked.

Some of the Labour pledges are pretty clear; freezing rail fares, raising the minimum wage, childcare and tax credits and a few tax commitments on what they will and won't raise.

But the big thing at the heart of this is that they want to put fiscal responsibility front and centre in the manifesto - but the one thing it doesn't say is how quickly they will cut the deficit.

They are only saying as soon as possible and until we know how quickly they want to cut the deficit we don't know how much they are either going to raise taxes or cut spending over the next Parliament.

And that leaves a gaping hole at the centre of their economic credibility that the other parties will be tying to exploit.

The Liberal Democrats claim the Labour manifesto offers no timetable for clearing the deficit, saying only that it will get national debt falling and a surplus on the current budget "as soon as possible in the next parliament".

The Lib Dems challenged Labour to "name the day" when they would finally balance the books. 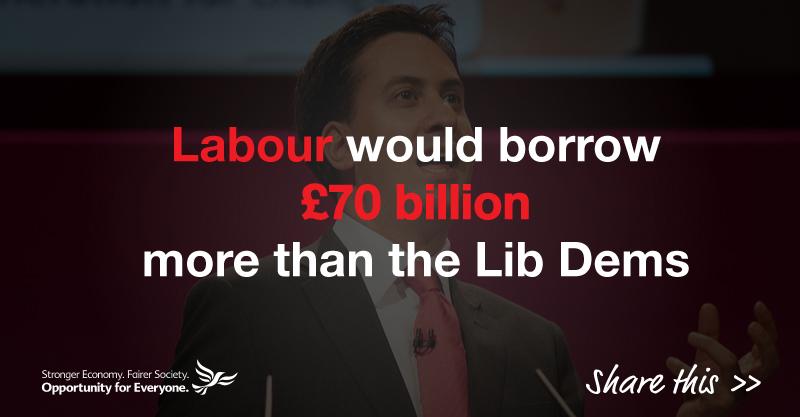