The Chancellor George Osborne has reacted to the launch of the Liberal Democrat's manifesto by claiming that a vote for them would put Ed Miliband and Labour in power.

Shadow Deputy Prime Minister Harriet Harman has claimed that the Liberal Democrats are trying to pretend that they haven't been part of government for the past five years - and that they aren't responsible for the country's 'problems'.

Nick Clegg laid his cards on the table with the Liberal Democrat manifesto launch.

He said his party were vital to stop the Conservatives or Labour lurching to "extremes". He also argued a coalition including the LibDems was the only way of keeping Nigel Farage and Alex Salmond out of government.

A ComRes/ITV News poll suggests a huge fall in support for the party in its south-west "heartland" - with the Tories benefiting most.

Deputy Labour leader Harriet Harman says no one would believe the Liberal Democrat's manifesto promises because they broke their pledge to protect university tuition fees.

People know that the Lib Dems are every bit as much to blame as the Tories. They have backed the Tories every step of the way while people's living standards have fallen and the NHS has been going backwards.

People know that the Lib Dems' manifesto can't be trusted. They broke the key promises in their last manifesto and are repeating them once again. People will remember the Lib Dems' record on trebling tuition fees, wasting £3 billion on the NHS and increasing VAT, and know their promises for the future can't be trusted. This country needs change - not the same Lib Dem broken promises.

The manifesto launch was held in a "creative space", a bit like a trendy bar. But this is serious stuff though.

Many compared the brightly coloured handprints and neon lights surrounding Nick Clegg to a "disco" as he delivered his speech in Battersea, south London. 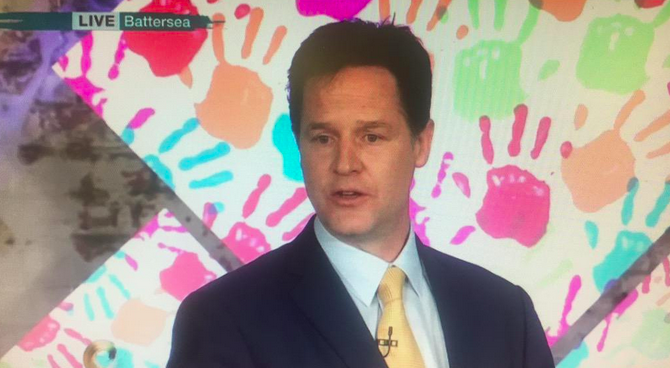 The #LibDemManifesto launch looks like they are having a party! #disco #GE2015

The #LibDemManifesto launch venue looks like a 70s nightclub that was closed after four weeks.

Lib dem manifesto launch being held in a creative space with multi coloured lights. Bit like a trendy disco #GE2015

The Liberal Democrats manifesto launch in Battersea was hit by a technical glitch today.

Watch Nick Clegg interrupted by a soundcheck as his microphone fails:

Nick Clegg called the Liberal Democrat manifesto "an insurance policy against a government lurching off to the extremes" after the election.

With neither Labour nor Conservatives making a breakthrough in opinion polls, Clegg said the big question for voters is which party will join David Cameron or Ed Miliband in coalition.

He urged voters to consider "what will become of Britain" if Ukip's Nigel Farage or the SNP's Alex Salmond get into government.

He pledged that Liberal Democrats would always act responsibly, fairly and "in the best interests of Britain" if they return to government as part of a coalition, promising, "We will add a heart to a Conservative government and we will add a brain to a Labour one."

Nick Clegg has reiterated that mental health care is a priority in the Liberal Democrat election manifesto.

We have made mental health a priority in our manifesto #GE2015 http://t.co/sjqxgMqHng http://t.co/Y7eqoblQk3 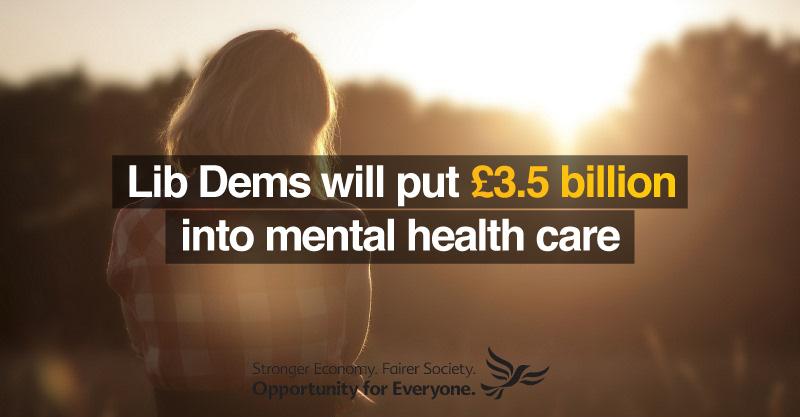 "We're turning the page on generations of inequality between mental health and physical health," he told an audience in Battersea during his party's manifesto launch.