Sepp Blatter must have known about the $10m payment sent from a Fifa account to the disgraced former vice-president Jack Warner, the former UEFA president Lennart Johansson has claimed.

The money was sent in 2008 from Fifa to an account controlled by Warner following a request to Fifa secretary general Jerome Valcke from the South African Football Association (SAFA). Warner's former deputy Chuck Blazer has testified in court that the cash was a bribe for their votes for South Africa to host the 2010 World Cup.

Blatter announced on Tuesday he will step down as president next year after a letter from SAFA to Valcke was made public. The FBI is reported to be investigating both him and Valcke as part of its probe into corruption involving Fifa officials which has seen 18 people already indicted.

Johansson, the 85-year-old who was beaten by Blatter in the 1998 presidential election, said his old adversary should leave Fifa now.

I think that he must go immediately. I think the investigation has told him they will find out exactly what was done and by whom. The general secretary (Valcke) was sending away millions of dollars to America and then Blatter claims that he didn't know. He knows everything that's going on so don't believe that.

The cash out (was) so much money and he who keeps everything under such tight control should know about it, this is nonsense.

I fought him for 20 years and then he bluffed me in '98 and everyone knows how. I was not very optimistic on that as he's very intelligent and he knows his market.

FIFA has refused to say whether Sepp Blatter or Jerome Valcke will attend the women's World Cup in Canada.

Blatter, who is reportedly under investigation by the FBI, would normally attend the finals but is remaining in Zurich following Tuesday's announcement that he is to step down as FIFA president.

Valcke, FIFA's secretary general, is also reported to be under investigation.

Asked if either was attending the women's World Cup, a FIFA spokesperson said via email: "Future travel plans will be confirmed in due course."

Fifa's payment to Ireland over Thierry Henry's hand-ball has been condemned as "a joke" by the head of German football.

Wolfgang Niersbach, the president of the German football federation and a Fifa executive committee member, spoke out after the world governing body admitted paying the Football Association of Ireland 5million euros as compensation for the infamous Thierry hand-ball in a World Cup play-off.

The Fifa payment, initially a loan, was agreed in return for the FAI not taking the case to court. Had Ireland qualified for the 2014 finals they would have had to pay the money back.

Niersbach told German television station ZDF: "It is a joke that they paid this money out to stop the Irish taking them in front of court."

France beat Ireland in the 2009 play-off 2-1 on aggregate - with France's extra-time decider in the second leg owing much to an Henry hand-ball in the build-up - which led to the FAI threatening legal action after missing out on the 2010 World Cup.

Chief Executive of the Irish Football Association John Delaney has admitted Fifa paid the organisation to avoid a legal case.

Germany does not want a boycott of soccer's World Cup tournament, the president of the German Football Association (DFB) Wolfgang Niersbach told Reuters on Tuesday.

"We don't want to go down that route of a boycott - that won't accomplish anything," Niersbach said in an interview.

"We don't want to get into a situation like with boxing where there are several parallel associations. That doesn't work."

A House of Commons debate on Britain's relationship with FIFA will be held on Wednesday June 10th in Westminster Hall involving sports minister Tracey Crouch who will respond for the Government.

Damian Collins, the MP who is campaigning for reform of FIFA has secured the debate, said:

"I want to take forward the case for a boycott of FIFA and the 2018 World Cup if Sepp Blatter remains president. This should also include planning now for an alternative World Cup to be organised for 2018."

A $10m from Fifa to an account controlled by the disgraced former vice-president Jack Warner followed a letter from South Africa to Fifa secretary general Jerome Valcke, it can be revealed. 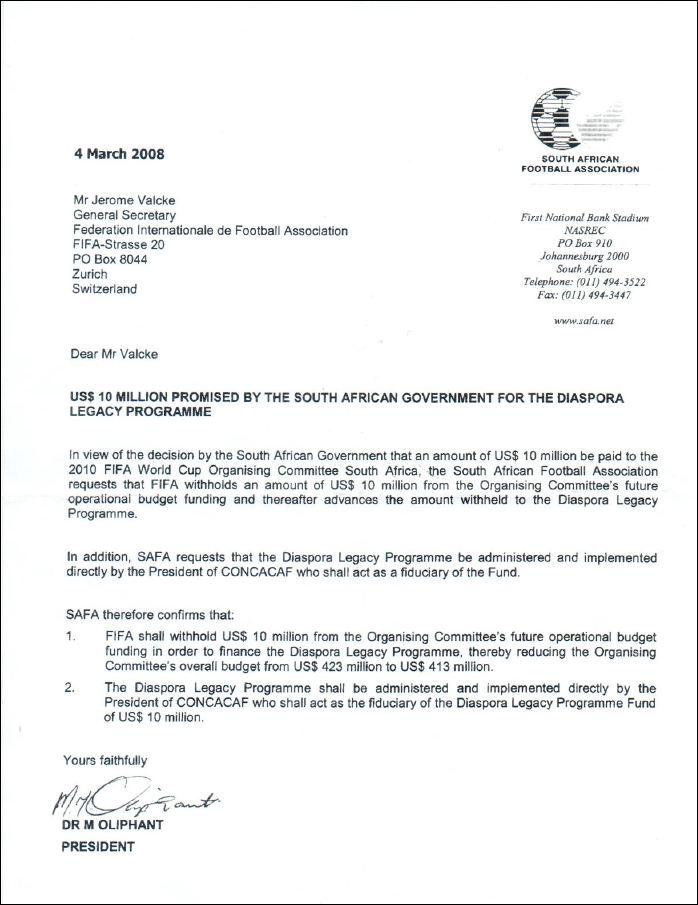 The payment followed a letter from South African FA president Molefi Oliphant to Valcke asking for the payment to be withheld from World Cup funds and paid instead to Warner to support football in the Caribbean.

The payment is at the heart of the FIFA bribery scandal - a US justice department indictment of 18 people on corruption charges says the money was paid to Warner and his deputy Chuck Blazer in return for them voting for the 2010 World Cup to be played in South Africa.

A Fifa statement had claimed Valcke was not involved, but that the payment was made at the request of the South African government and FA, and authorised by Julio Grondona, the former finance chief and long-time ally of president Sepp Blatter. Grondona died last year.

A copy of the letter published by Press Association (above) contains detailed instructions for the payment.

FIFA has said that Julio Grondona, who died last year, authorised a $10m payment that is at the heart of the bribery scandal.

Two officials from the Congolese Football Association have been banned from football-related activities following a request by the Fifa Ethics Committee's investigatory chamber.

Meanwhile the General Secretary of the Confederation of North, Central America and Caribbean Football Association (CONCACAF), Enrique Sanz, has also been provisionally suspended from all football-related activities.

In a statement the Fifa Ethics Committee said Sanz was suspended "on the basis of investigations carried out by the investigatory chamber of the Ethics Committee and the latest facts presented by the US Attorney's Office for the Eastern District of New York."

The daughter of embattled Fifa president Sepp Blatter has claimed her father is a victim of a conspiracy from "behind the scenes".

Blatter - who won a fifth term on Friday - has been under intense pressure to step down since senior Fifa officials were arrested on a string of corruption charges last week.

But the 79-year-old's daughter Corinne Blatter told the BBC that her father should not have to resign as he was not the "person who is taking money".

Asked whether she believed there was a conspiracy against Blatter, she replied: "I wouldn't say from the Americans and the British, but certainly people working behind the scenes, yes absolutely."

Ms Blatter said the dramatic events over the past week had been an attempt to "discredit" her father so that "he would resign", but she insisted that "no one will talk about it anymore" in a matter of weeks.