Steve Bingham suffers regular flashbacks and been on medication for psychological trauma since the incident.

The left engine of the BA aircraft that caught fire on the runway at Las Vegas airport had "multiple breaches of the engine case", US air investigators have reported.

In a preliminary report into the incident, the US National Transportation Safety Board (NTSB) said that examination of the plane's left engine revealed the breaches were “in the area around the high pressure compressor".

The report also said that material was recovered from the runway path the Boeing 777 had taken, including several pieces of the high pressure compressor spool.

Further Initial examinations had revealed that the "left engine and pylon, left fuselage structure and inboard left wing were substantially damaged by the fire"

The NTSB added that the flight data recorder, cockpit voice recorder and quick access recorder were all now being downloaded for examination.

The veteran British Airways pilot hailed a hero for saving the lives of passengers on a burning plane has said he is unlikely to fly again.

ITV News understands that two of the emergency slides at the rear of the BA plane that caught fire at Las Vegas airport failed to deploy properly.

172 people were forced to escape the flight on emergency slides when the fire broke out.

British Airways says the whole incident is being investigated by the US National Transportation Safety Board.

A textbook response but @itvnews has been told that 2 of the emergency slides on BA 2276 failed to deploy properly. http://t.co/2l66T8foKO 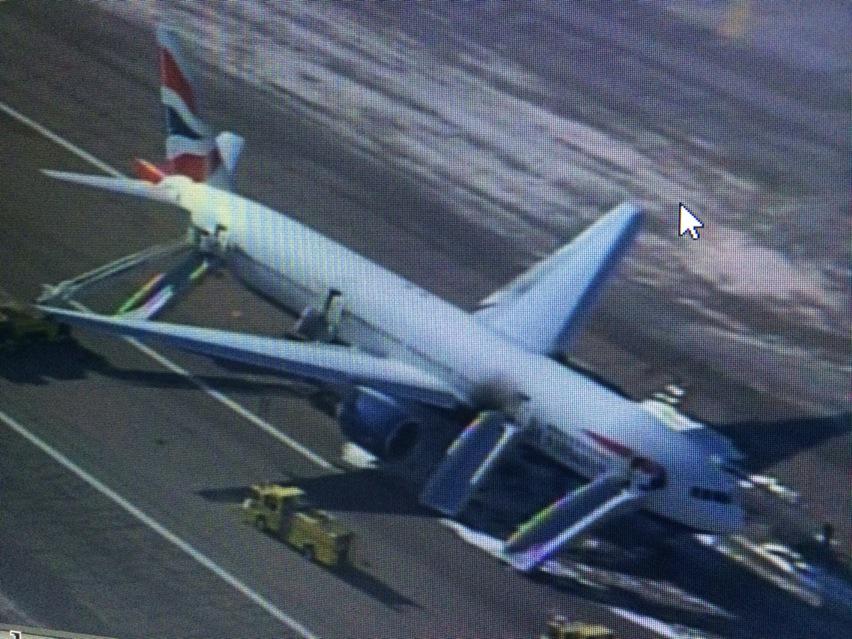 The partner of the British Airways pilot whose plane burst into flames as it was preparing to take off from Las Vegas has said she is "very proud" and "grateful everyone is safe and sound".

Chris Henkey told evacuated passengers that the fire had been the result of "catastrophic engine failure". 172 people were forced to escape on emergency slides.

Lenka Nevolna said: "I'm very proud and grateful that everyone is safe and sound."

She added: "He rung as soon as it happened and asked me to let his daughter know as well. We are immensely proud of him, it's very overwhelming."

Aviation experts have been alarmed at images of passengers clutching their hand baggage as they were evacuated from the burning British Airways plane in Las Vegas.

A number of travellers stopped to get their suitcases, rucksacks and other bags from under their seats and in the overhead lockers before leaving the plane via the emergency chutes.

Aviation expert Julian Bray described the Las Vegas incident as a "textbook emergency evacuation" apart from passengers taking their bags with them.

The only downside is those pictures of people holding luggage. The last thing you should do is delay everybody else getting out alive by looking around for your own hand luggage and possibly opening the overhead bins to retrieve it.

Captain Brendan O'Neal, chairman of the British Airline Pilots' Association, said: "Failing to follow the instructions of the crew by stopping to collect luggage is extremely dangerous as it slows down the evacuation, could block aisles and prevent passengers getting off in time and could cause injuries."

The hero pilot of the plane which burst into flames on the runway in Las Vegas has been named as Chris Henkey.

This picture posted on Twitter shows the extent of the damage to the British Airways plane which caught fire in Las Vegas.

A gaping hole can be seen in the side of the aircraft as well as a large amount of smoke damage.

British Airways has apologised to passengers caught up in a fire on a aircraft in Las Vegas.

In a letter to customers, the airline asked for their patience while the situation was dealt with.

"I am very sorry that you were involved in the incident at Las Vegas Airport today," the letter said.

"We do not underestimate how distressing the experience has been for you and we have a dedicated team of staff here to help you."

An apology letter from BA. It's 9.45pm in Las Vegas and we have just heard from a beleaguered tour guide. http://t.co/eaLvk8l0Ws