A businessman says he had a 'lucky escape' from the fire which engulfed part of a luxury hotel in Dubai on New Year's Eve.

Richard Upshall had been sitting on a terrace with a friend at the Address Downtown Hotel when they noticed flames above them.

Yes, we were there, and we got out safely. Really slow response from hotel, police and everyone and no alarms at all!!! I hear all are safe

Mr Upshall told ITV Tyne Tees that the fire caught the hotel 'by surprise' and said guests organised themselves in order to escape.

Mr Upshall is based in the UAE but has five companies in Stockton. Among them, a talent management business which represents the Billingham singer Josh Daniel, who took part in this year's X Factor.

Mr Upshall went back to the scene of the fire today and posted the following tweets:

Went to pick up my car from The Address close to @burjkhalifa and you would never know anything happened #DubaiFire https://t.co/Sw6r0EFdx7 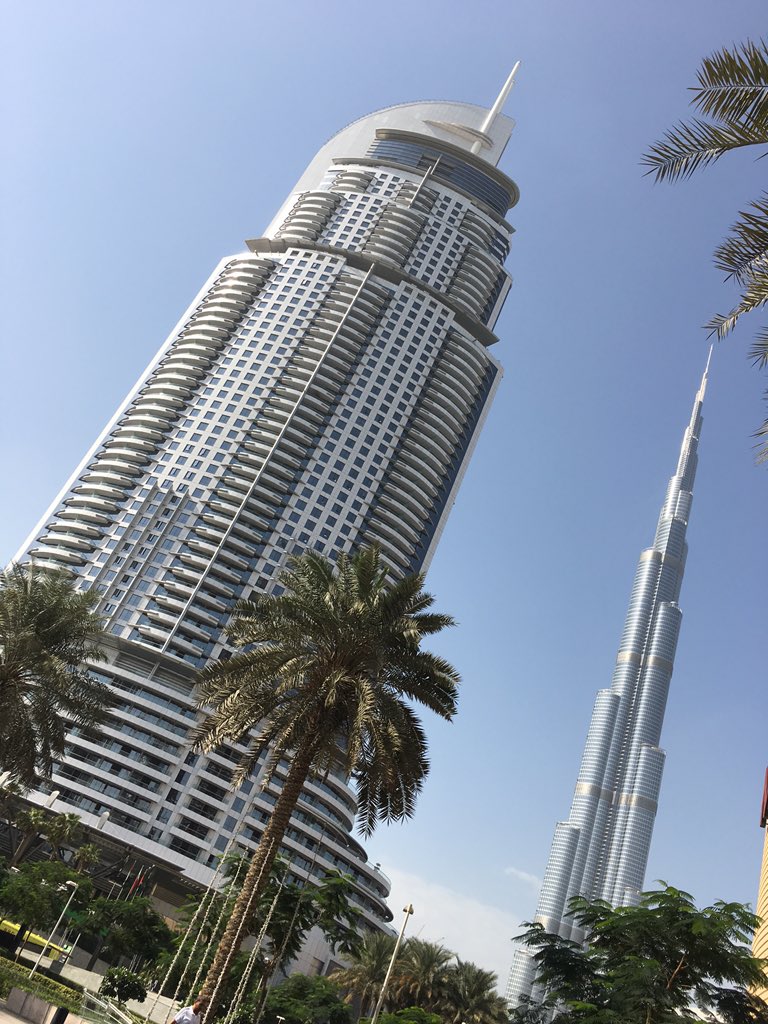 However, drive around and it becomes clear that it was #ToweringInferno the smell of smoke still fresh #DubaiFire https://t.co/OnhQurodWO 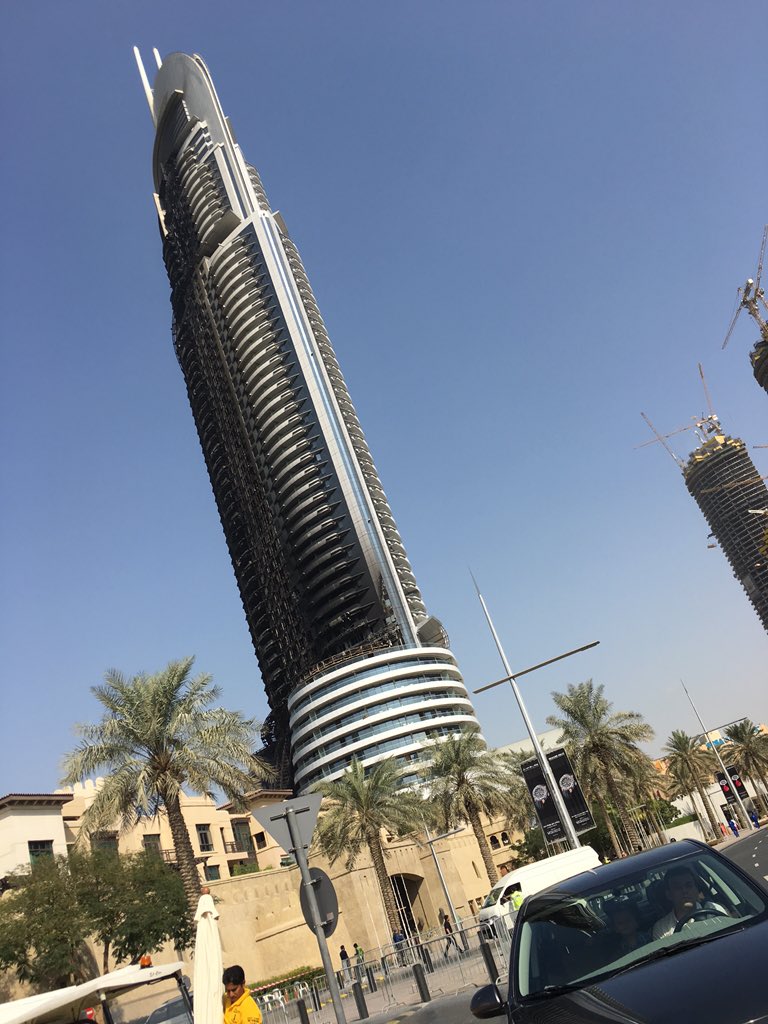 In a statement, the Dubai government said it responded 'rapidly' to the fire, coordinating efforts to 'instantly evacuate' hotel guests..

The Abu Dhabi-based newspaper The National reported the chairman of Emaar Properties, which owns the hotel, as saying:

Our immediate priority was ensuring the safety of our guests and colleagues, and we evacuated all of them safely in record time in a most orderly fashion.

Video footage released by the Dubai government shows extensive damage to a high-rise luxury hotel after a fire.

No-one was seriously injured during the blaze at the 63-storey Address Downtown hotel which occurred on New Year's Eve.

Authorities have launched an investigation into the cause of a huge fire in a high-rise luxury hotel in Dubai on New Year's Eve.

Only minor injuries were reported in the aftermath of the fire at the Address Downtown hotel, which burned long into New Year's Day before firefighters finally brought it under control 12 hours after it began.

Authorities have launched an investigation into the cause of a huge fire in a high-rise luxury hotel in Dubai on New Year's Eve.

Dubai-based Emaar Properties, which built the Burj Khalifa, the Address Downtown and other surrounding developments, declined to immediately answer questions about the fire. It did issue a statement praising authorities "for their immediate and professional support".

"An investigation is ongoing and details will be provided once they are ascertained," the statement said.

Photographs released by the Dubai government show the extent to which the Address Downtown hotel was damaged by fire overnight. 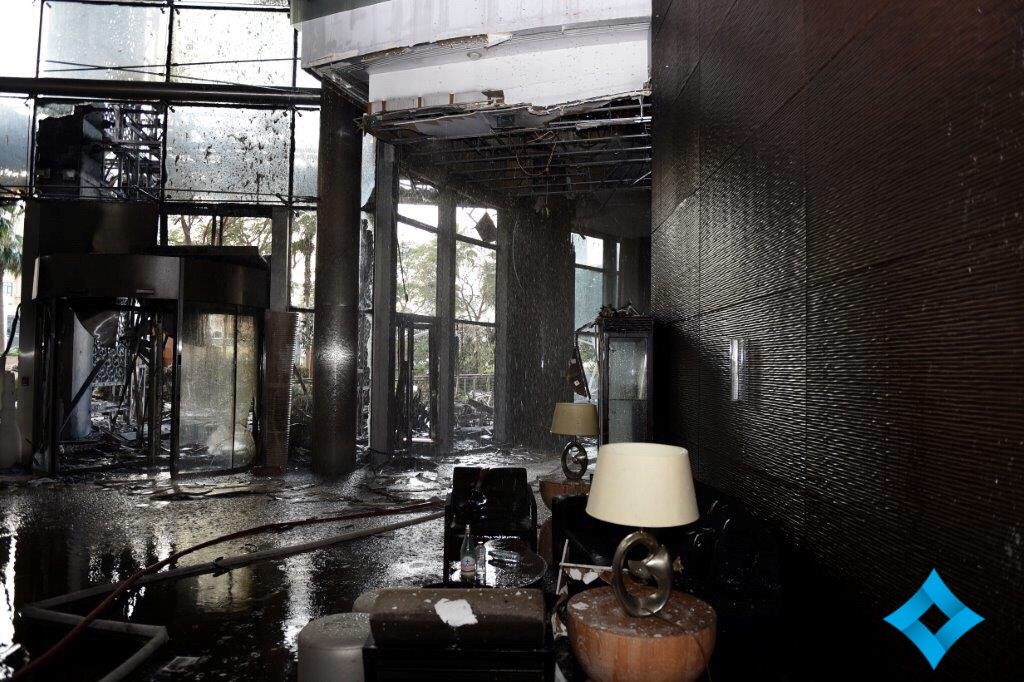 Despite dramatic footage showing flames leaping from the upper floors after the fire broke out late in the evening on 31 December, there were only a few minor injuries as guests and residents escaped the building. 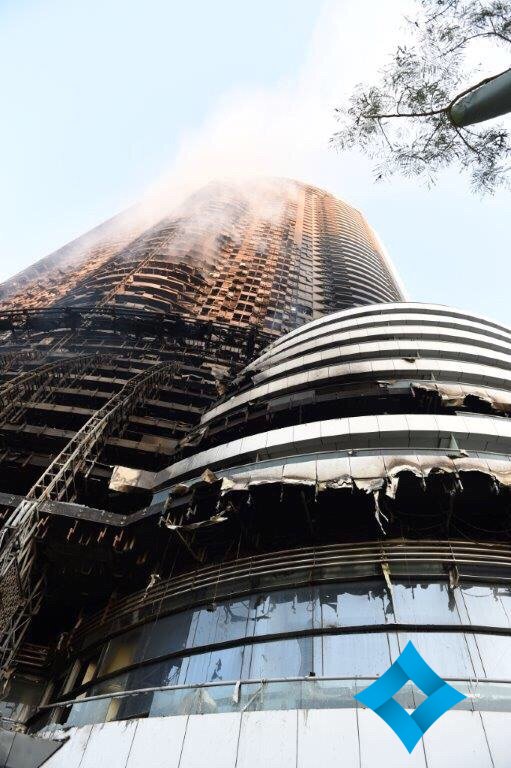 Firefighters appear to have mostly extinguished the fire at the Address Downtown hotel in Dubai, according to witnesses.

Witnesses reported seeing some flames coming from a lower portion of the building as late as around noon local time, but a hotel spokesperson said the situation was under control.

The fire in the hotel has been contained. We would like to express our gratitude to the authorities for their immediate and professional support.

An investigation is ongoing.

A blaze which ripped through a 63-storey luxury hotel in Dubai is still burning - but is now under control, hotel bosses have confirmed.

Despite dramatic footage showing flames leaping from the upper floors after the fire broke out late in the evening, there were only a few minor injuries as guests and residents escaped the building.

In an e-mail, a hotel spokesman said the fire had been "contained".

"We would like to express our gratitude to the authorities for their immediate and professional support. An investigation is ongoing," he added.

Medics said 14 people suffered mild injuries while more than 60 were treated for smoke inhalation, but there were no reported deaths.

Pictures show the aftermath of a fire at a 63-storey skyscraper in Dubai.

The fire at The Address Downtown hotel, which is close to the world's tallest skyscraper, the Burj Khalifa, broke out ahead of New Year celebrations in the city.

Only minor injuries were reported.

Dubai's New Year fireworks display went ahead at midnight at the Burj Khalifa, the world's tallest building, despite a massive fire at the nearby Address hotel.

The display at the Burj is traditionally one of the largest seen at New Year.

Officials from the emirate had earlier insisted the blaze at the Address hotel would not prevent the fireworks going ahead.

The number of injuries reported following a huge fire in downtown Dubai has reached double figures, according to reports.

The Dubai Government's official media Twitter feed states that there were 14 minor injuries as a result of the blaze, including one heart attack and numerous injuries related to over-crowding and smoke inhalation.

However a medic, speaking on the condition of annonymity, told Reuters there were "more than 60 people injured with light injuries".

A fire which started outside the 20th floor of a 63-storey skyscraper in downtown Dubai is now 90 percent under control, UAE authorities have confirmed.

The fire at The Address Downtown hotel started as the city prepared to celebrate the start of 2016 with a major firework display in the city.