Three of Labour leader Jeremy Corbyn's shadow ministers walked out on him on Wednesday, launching a bruising attack as they went.

They were angered by sackings they claim were "vindictive" and "stupid".

So what exactly is Hilary Benn's new agreement with Jeremy Corbyn?

Two former Labour frontbenchers who resigned after Jeremy Corbyn's shadow cabinet reshuffle have told ITV News that it was a mistake for the party leader to sack former Europe shadow minister Pat McFadden.

Shadow Rail Minister Jonathan Reynolds said that the "majority of British people" would agree with McFadden's comments in relation to the Paris atrocities, which was seen as a thinly-veiled criticism of the party leader's line.

Shadow foreign affairs minister Stephen Doughty, who resigned shortly after Reynolds, said he would have said "exactly the same things" that McFadden said about terrorism.

I'm very dismayed at the way [Pat McFadden has] been sacked and handled in that way. I think it is only honourable given that I have the same views as him that I should step away at this time.

Announcing his resignation on Twitter with a copy of his letter to the party leader, the Durham MP cited the issue of Trident as the reason for moving to the backbench. 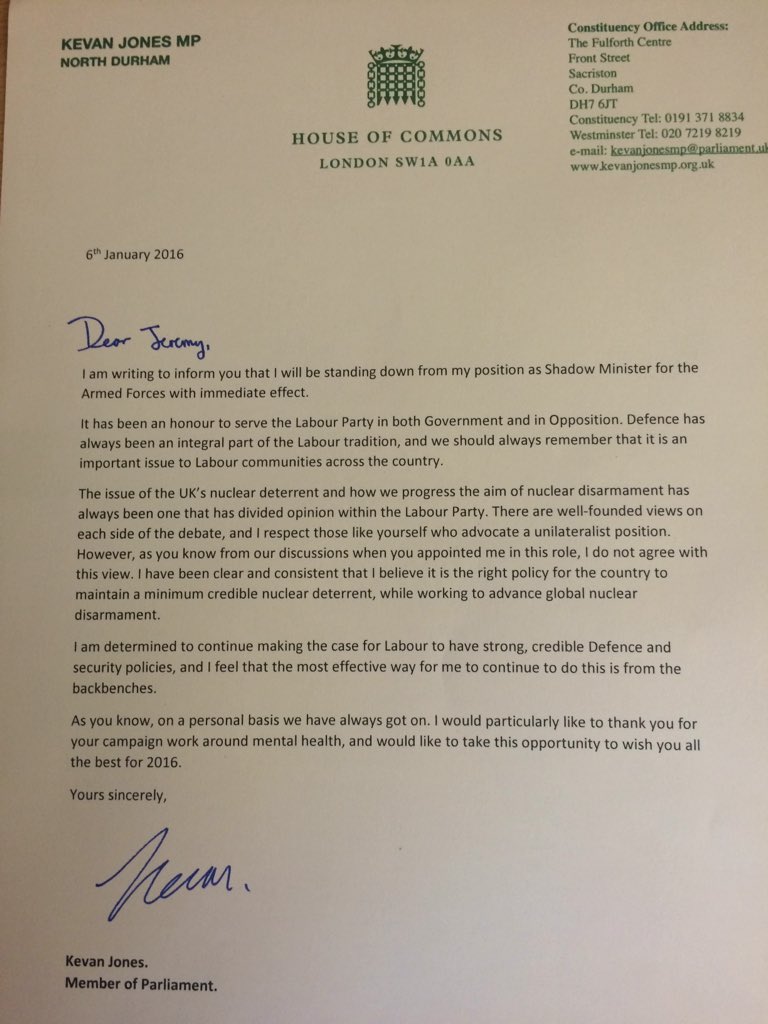 Labour MP Stephen Doughty is the latest frontbencher to resign, quitting his post live on TV.

The shadow foreign affairs minister made the announcement to viewers of BBC Daily Politics show on Wednesday.

He said that he believed resigning was the "honourable" thing for him to do because he disagreed with the sacking of Pat McFadden.

Jeremy Corbyn has sacked two frontbenchers and moved another while Hilary Benn remains in his Shadow Cabinet. But has Corbyn got his way?

Maria Eagle, who replaced Michael Dugher as Shadow Culture Secretary in Jeremy Corbyn's latest reshuffle, has said she is "pleased" with the appointment.

In a statement on Twitter, she said that culture, arts and sport are an "important part of our national life" and pledged to "take (the Tories) to task" on issues including the BBC and Leveson.

Pleased to have been appointed to new role as Shadow Secretary of State for Culture, Media and Sport (1/4)

Culture, the arts & sport are an important part of our national life but under this Tory Govt we have seen them suffer from huge cuts (2/4)

The Tories have also launched an attack one of our most treasured institutions - the BBC. I will take them to task on these issues (3/4)

He announced on Twitter his decision and posted his resignation letter on Facebook, adding: "On reflection regarding yesterday's Labour reshuffle, I have decided that it's best if I serve the Party as a backbencher. I've written to Jeremy this morning to let him know."

I have this morning resigned from the Labour frontbench - https://t.co/Sdvrho3HED

In his letter, he referred to former Shadow Europe Minister Pat McFadden who was rumoured to have been sacked over "disloyalty" to Jeremy Corbyn.

Reynolds said that he believed McFadden was right in his comments following the Paris attacks, which were said to have "infuriated" Corbyn.

The security and well-being of my constituents must always be my first consideration, and I therefore believe my colleague Pat McFadden was right to condemn those who would to any degree absolve ISIS for their actions following the atrocities in Paris.

Shadow Chancellor John McDonnell described Jeremy Corbyn as the "Arsene Wenger of politics" as he dismissed speculation following the party's cabinet reshuffle as "a lot of hype".

Speaking on Good Morning Britain, he rejected the suggestion the Labour leader had "dithered" over the shape of his new shadow cabinet.

He told presenters Susanna Reid and Piers Morgan that Foreign Secretary Hilary Benn was "never going to go" adding that Labour's free vote over air strikes in Syria meant he was at liberty to disagree with the party leader.

But he later told the BBC that in the future, Benn must speak from a few rows back if he wants to disagree with Corbyn on a free vote.

[Corbyn is] re-dictating the terms of what leadership is all about. It's about bringing people in, building a team, being a good manager and that's what he's developing. He is an Arsene Wenger of politics.

McDonnell said that Maria Eagle had taken her "dream job" switching the defence and culture briefs.