Thousands of anti-Islam protesters have marched through the streets of Leipzig, Germany.

Members of far-right group Pegida (Patriotic Europeans against the Islamisation of the West) joined a demonstration by their Leipzig sister movement Legida.

Holding banners and shouting slogans including "Merkel needs to go", the event was organised in protest over the mass violent and sexual assaults which took place in Cologne on New Year's Eve.

The attackers have been widely described as looking of "Arabic" and "north African" descent.

A rival anti-Pegida rally was held at the same time - and according to ITV News deputy news editor Zoe Kalus, who was in Leipzig, that outnumbered the Legida rally.

Big turn out in Leipzig for the #Legida anti-Muslim protests and even bigger turnout for anti #pegida protesters https://t.co/jI2hz34I9Q 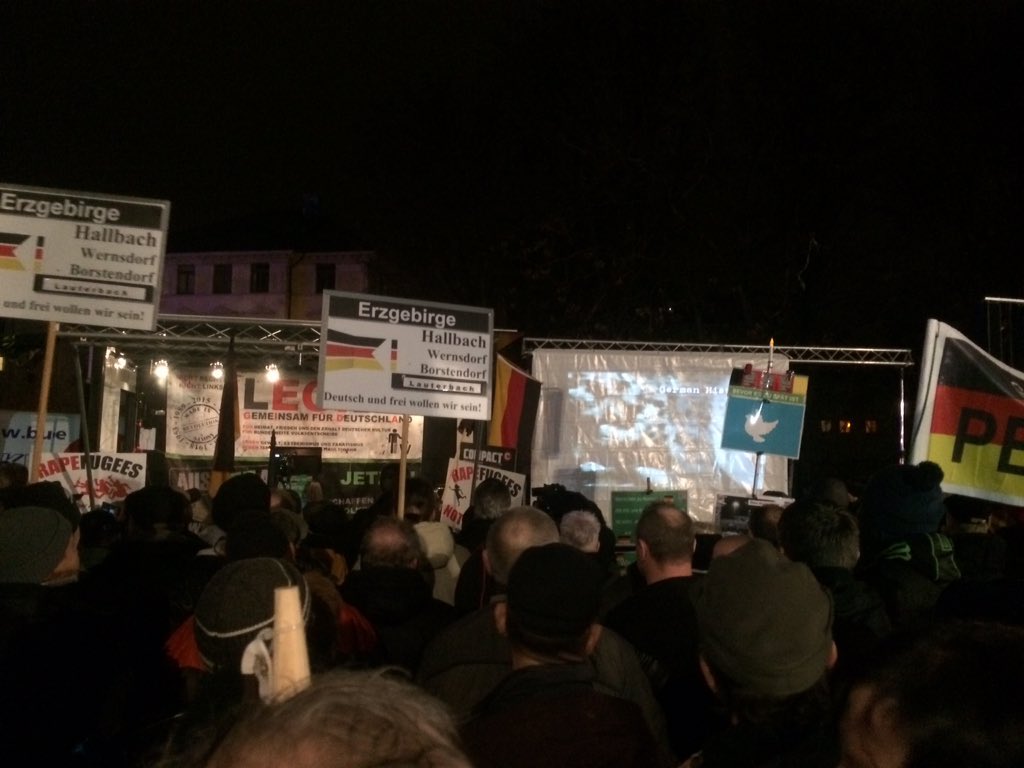 The German interior minister has said the fact that people of foreign descent were behind much of the violence in Cologne on new year's eve should not be kept quiet but neither should it lead people to general suspicion towards all refugees and migrants.

Thomas de Maiziere described the violence as "completely unacceptable" and said it was urgent that new tougher legislation be agreed to punish the perpetrators, saying Germany could not afford long, divisive debates about changes to the law.

German police say a group of Pakistanis and a Syrian were violently attacked by about 20 unknown assailants on Sunday in Cologne.

There are raised tensions in the city after an anti-migrant rally followed new year's eve attacks on women.

A German state interior minister has said people of foreign descent were responsible for virtually all of the violence on new year's eve in Cologne, adding that this included migrants who arrived in Germany over the past year.

More than 100 women reported being threatened, robbed or molested during news year's eve celebrations in the city.

"Based on testimony from witnesses, the report from the Cologne police and descriptions by the federal police, it looks as if people with a migration background were almost exclusively responsible for the criminal acts," Ralf Jaeger, Interior Minister from the State of North Rhine-Westphalia told a special commission.

"All signs point to these being north Africans and people from the Arab world," he added. "Based on what we know now from the investigation, asylum seekers who arrived in the past year are among the suspects."

Police made a number of arrests during clashes with protesters in Cologne on Saturday.

Supporters of anti-immigration right-wing movement Pegida have been taking part in a demonstration following mass assaults on women on New Year's Eve, with some throwing firecrackers and beer bottles at police, Reuters reported.

Two people were injured during the protest, with a police spokesman saying some of the protesters came from the "hooligan scene".

More than 3,000 people attended the rally, with police using a water cannon against protesters at one point.

Police have used a water cannon to disperse protesters in the German city of Cologne.

Supporters of anti-immigration right-wing movement Pegida have been taking part in a demonstration following mass assaults on women on New Year's Eve.

Around 1,700 police officers have been deployed during the protest, and there were reports of scuffles between authorities and those taking part.

The German Chancellor wants increased powers to block foreigners from being granted asylum if they have any sort of criminal record.

A protester took to the streets of Cologne naked after a series of violent and sexual attacks against women on New Year's Eve.

Swiss artist Milo Moire braved the cold to bare all in the German city's cathedral square, holding up a sign which read: "Respect us! We are not fair game even when naked".

She said her protest was a reaction to some advice from officials warning women to keep men at arm's length, saying: "It is a matter of course we have worked for in the past 50 years, that I can live as a woman the way I want to, in freedom."

Police were on patrol in the square but did not interfere with the performance - though they did usher away a number of young men in the area around the main station and cathedral.

Witnesses have described the hundreds of men who carried out the attacks as being of "Arab or North African origin," but little concrete evidence has been released to date on who was responsible for the assaults.

The chief of police in Cologne has been "relieved of his duties" after a series of violent attacks and sexual assaults in the city on New Year's Eve, Reuters reports, citing a state government source.

Wolfgang Albers, aged 60, faced heavy criticism over his handling of the attacks, in which around 1,000 "foreign-looking" men mugged, threatened and assaulted women in the city centre as they rang in 2016.

He has reportedly now been told by state interior minister Ralf Jaeger that he would be given early retirement.

The police chief in the town of Cologne is set to resign following mass sexual assaults on women on New Years, a government source has told Reuters.

Police in the town had been criticised for failing to take action as gangs of men assaulted dozens of women in the town centre.