The ninth named storm of the winter has battered the UK leaving devastation in its wake.

The number of homes across Devon and Cornwall without power has been increasing for most of the day.

More information on cuts in your area.

Coastguards have hit out after schoolchildren were pictured standing on the beach as Storm Imogen hit the South coast.

The children were photographed near to the water at Hill Head in Hampshire as wind speeds up to 60mph hit the coast.

It's believed that the children were on a trip - but there concerns that their safety was put at risk as the weather conditions were so unpredictable.

Coastguard Rescue Officer Brian Graham said: "We do not recommend children of that age being that close to the waves.

"The waves are very unpredictable and no two waves break the same."

Amazing -one of the off duty coastguards just saw this group of primary school children on the beach at Salterns 1/2 https://t.co/F8vU2LDEKb

2/2 primary school children were on an organised trip-the waves are unpredictable & contain debris #StormImogen where was your child today?

Storm Imogen looks set to continue to bring squall showers and strong wind gusts as it sweeps across the south east of the country.

Imagery shared by the Joint Cyclone Centre shows the storm's expected path across the south east and into northern France and Germany later this evening: 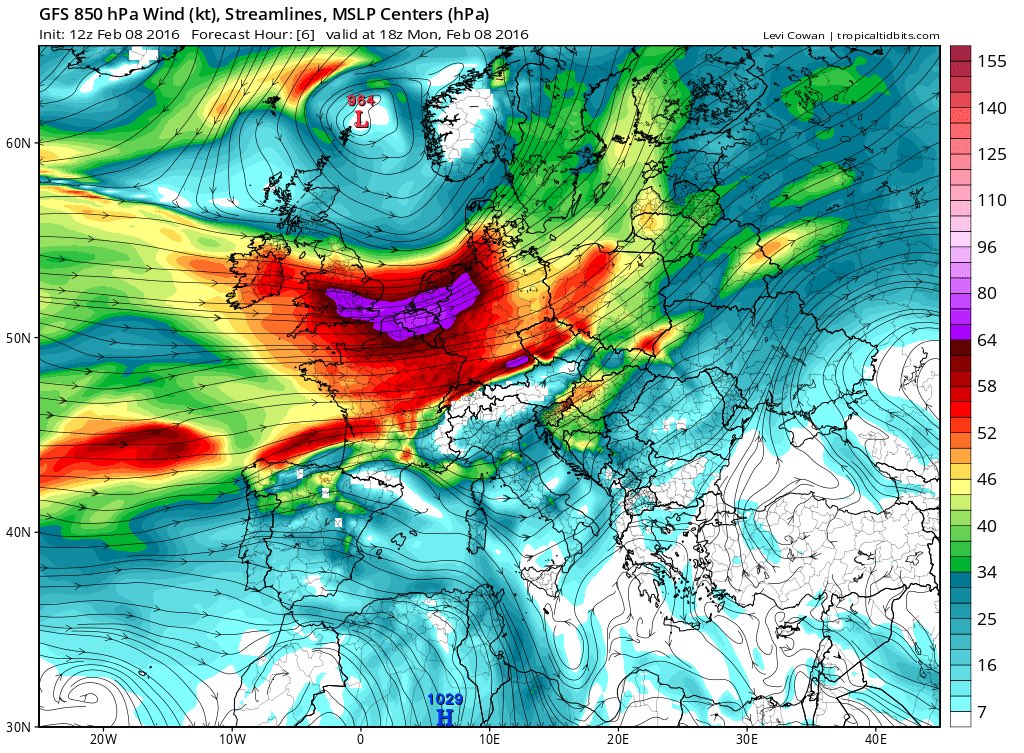 The Met Office has released a list of some of the strongest wind speeds recorded since Storm Imogen began - with Needles Old Battery on the west coast of the Isle of Wight topping the list with 96mph gusts reported.

An elderly man has been seriously injured and his dog killed when a flint garden wall crashed down on them during winds from Storm Imogen.

The man in his 70s suffered a suspected double leg break after the five foot high wall blew over as gale-force winds hit the West Sussex region.

A spokesman for South East Coast Ambulance Service said the man was "fully conscious" while being treated and was taken to St Richard's Hospital in Chichester.

Storm Imogen has brought a swathe of damage as 80mph winds swept across the UK, leaving more then 13,500 homes without power.

A wave of 63ft (19.1m) was recorded by the Met Office off the coast of St Ives amid the hurricane-force winds, while waves of at least 46ft (14m) were expected off Devon and Cornwall.

Bridgend town centre was shut amid fears people could be hurt by flying tiles blown from roofs as reports of storm injuries emerged.

A five-year-old boy and seven-year-old girl were airlifted to hospital after suffering serious leg injuries when a stone wall collapsed on them in the Worcestershire village of Bretforton.

A father and daughter near Exeter in Devon also reportedly had a lucky escape when a 100ft (30.5m) tree was blown onto their car parked outside their house, minutes before they were about to leave to travel to school.

More than 13,500 properties have been stripped of power as Storm Imogen continued to cause havoc across Britain.

Homes across the South West and Wales were worst affected, the latest figures from Western Power Distribution's regional breakdown have shown.

Gale-force winds from Storm Imogen that have been battering Britain's southern coastline have also whipped up a sandstorm that left a car partly submerged on a Cornish beach.