A second boat has left the Greek island of Lesbos taking 79 more migrants to Turkey as part of a deal to return those crossing the Aegean Sea to enter Europe.

One woman was among those on board the Turkish ferry, which left Mytilene port in Lesbos.

The migrants sent to Turkey today were mainly from Pakistan.

Forty-five migrants were taken by ferry from Lesbos to Turkey as Greek authorities restarted returns under an EU deal to stem the flow of migrants and refugees to Europe.

The ferry left the port of Mytilene on Friday morning, with a second boat expected to leave later, state television reported.

Two protesters at the port jumped into the sea and began swimming towards the boat and were pulled out of the water by the Greek coastguard.

The first group of 202 migrants to be returned, most of them from Pakistan and Afghanistan, were sent back to Turkey on Monday.

The Prime Minister has offered to provide more help to Greece as it struggles to return migrants to Turkey.

The EU-Turkey agreement to tackle the migrant crisis took effect on Monday but Greek authorities have warned the operation is threatened by a shortage of personnel.

The Prime Minister welcomed the start the Greek authorities had made to returning migrants to Turkey under the agreement, and reiterated the importance of breaking the link between people making the dangerous crossing of the Mediterranean and securing settlement in Europe... The Prime Minister confirmed that additional UK personnel would be offered to Greece over the coming weeks to provide additional support.

The Pope is to visit Greece, including the island of Lesbos, the Government there has confirmed.

Pope Francis and the Greek Orthodox Patriarch will visit the area on April 14 and 15, ITV News producer Maria Kagkelidou said.

Greece has postponed the return of the next group of migrants to Turkey until Friday, according to a Turkish official.

Greece began to return migrants back to Turkey on Monday, as part of an EU agreement to control the mass influx of people in Europe.

Thousands of people awaiting deportation to Turkey have applied for asylum in a bid to stay in Greece.

Thousands of people held in migrant detention camps as they await deportation to Turkey have applied for asylum in a bid to stay in Greece, authorities claimed today.

According to comments made by Maria Stavropoulou, director of Greece's Asylum Service, on state TV the influx of asylum applications 'could slow the rate of returns under the EU-Turkey deal'.

She said that some 3,000 people held in deportation camps on the islands are seeking asylum, with the lengthy application process to formally start by the end of the week.

Hundreds of migrants have been protesting in Lesbos today as they wait at a detention camp before being deported to Turkey.

ITV News' team in Lesbos caught them on camera as they chanted the word "freedom" over and over as they staged a sit-in at the Moira detention camp.

Turkey is set to take in an estimated 200 'irregular' migrants from the Greek island on Wednesday, a government official has confirmed.

It comes as an EU agreement for Turkey to take back migrants and refugees who cross the Aegean to enter Greece illegally came into effect yesterday.

Several hundred migrants have been pictured staging a sit down protest at a detention camp on the island of Lesbos.

Sit down protest by several hundred migrants at the Moria detention camp on #Lesbos. Shouting "I want freedom" https://t.co/3nR8xtmo2n 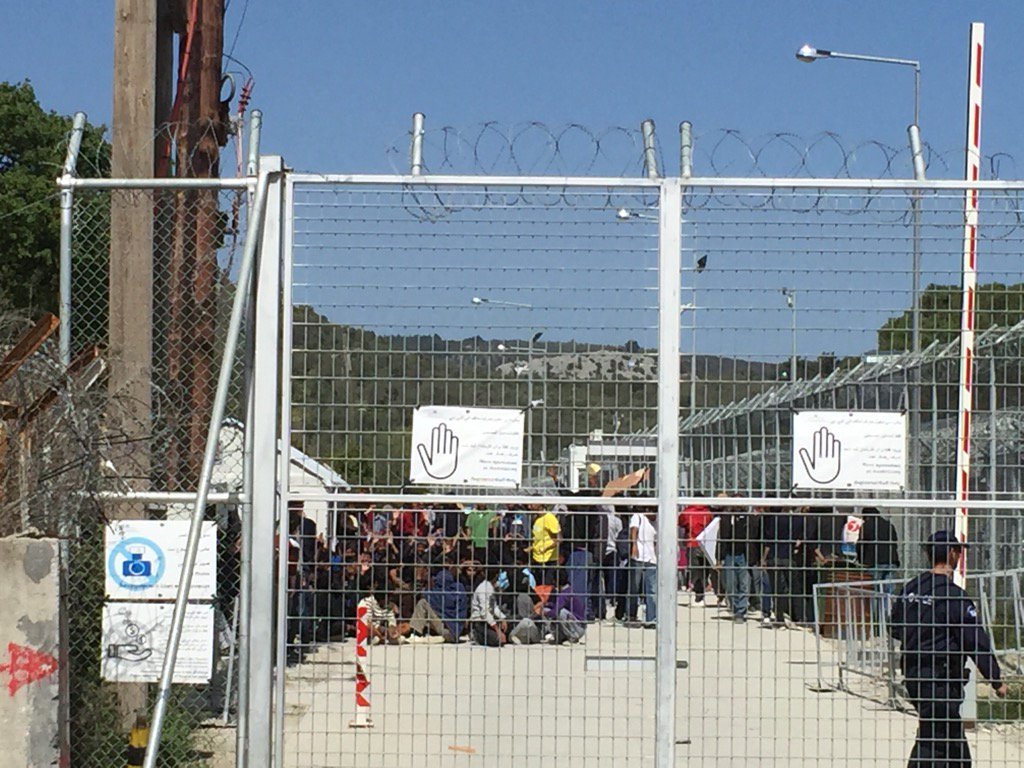 More migrants have been pictured arriving on the island of Lesbos, as Greece enters the second day of compulsory migrant repatriations.

Greece began to return migrants back to Turkey yesterday as part of an EU agreement to control the mass influx of people in Europe but the threat of deportation seems to have left new arrivals undeterred.