Three more people have been rescued from a building which collapsed in Kenya six days ago.

Two women and a man were rescued in addition to a woman who was found earlier today.

One of the rescued women was pregnant but sadly her baby did not survive.

Super news! Three more people have been rescued alive from the Huruma building collapse. One male and two female. https://t.co/8P93E2dqvw 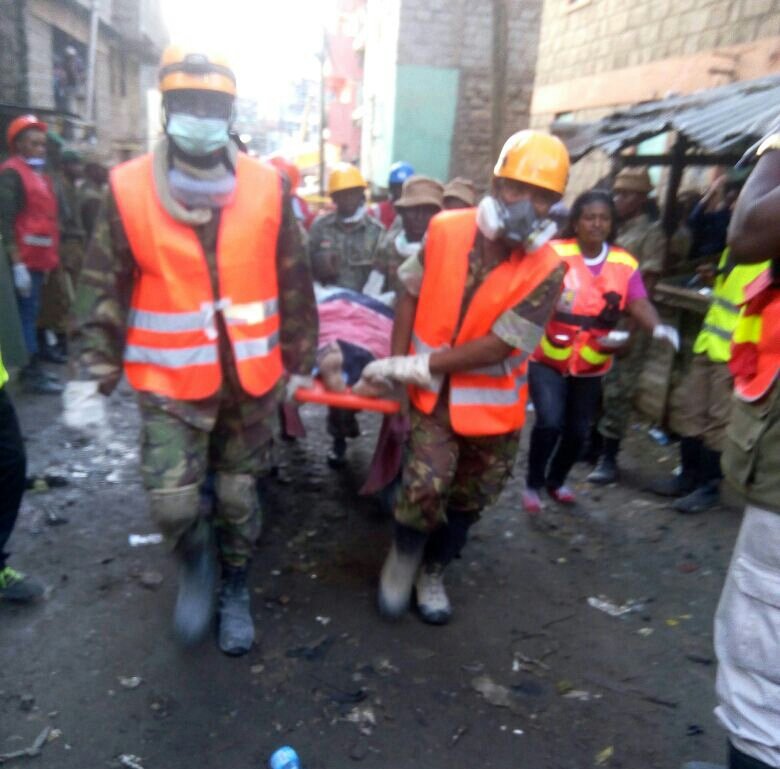 A woman has been pulled alive from beneath the rubble of a collapsed building in Kenya, six days after it came down.

Rescue workers spent several hours carefully digging their way to the woman after she was spotted still breathing earlier today.

She was carried to an ambulance as passers-by and well-wishers cheered.

At least 36 people were killed when the residential building in Huruma, Nairobi, which had been deemed not suitable for human habitation, collapsed on Friday night following several days of heavy rain.

Around 80 people are still thought to be missing.

A woman has been found alive in the rubble of a collapsed building in Kenya, six days after it came down.

Rescuers are currently working to free her.

At least 35 people have been confirmed dead after the Huruma building in Nairobi - which had been declared unfit for human habitation and did not have an occupancy permit - collapsed.

More than 80 people are still believed to be missing.

Five suspects believed to have links with the building and its management appeared in court on Wednesday and were released on Sh1 million (£6,870) bond each.

An 18-month-old girl has been pulled alive from a collapsed building in Nairobi, after being buried for almost four days.

Kenya's National Disaster Management Unit has confirmed that 16 people have died and 73 are still missing after a building collapsed on Friday.

Rescuers are continuing to look for survivors in the building, which had been declared unfit for human habitation and did not have an occupancy permit.

Police have ordered the owner to turn themselves in for questioning.

The death toll following the collapse of a six-storey building in Kenya rises to 10 as fears grow for those still trapped in the rubble.

The death toll from the collapse of a six-storey building in Kenya's capital has risen to seven and the number of injured stands at 121, police have said.

A rescue operation is continuing to find survivors after the building collapsed in Nairobi's Huruma residential estate late on Friday after days of heavy rains that have left several parts of the city flooded.

"The search and rescue operation is ongoing for people feared trapped inside the collapsed building of the six-storey building", he added.

At least three people have reportedly been killed after a six-storey building collapsed in the Kenyan capital Nairobi.

Local media reported that about 58 people had been rescued from the apartment block and 29 were taken to hospital. It's not known how many more people are still trapped.

The collapse was reportedly because of heavy rain which has caused widespread flooding in the area.