Parents took their children out of school today in protest at tests that they say are overstretching schoolchildren.

Sats tests for six- and seven-year-olds aren't new, but many believe they have increased in difficulty over the years.

Supporters of the tests say this is the only way to ensure that pupils who are struggling can be identified and helped.

Answer these sample questions to find out how you measure up against primary school pupils aged up to 11 years old.

Campaign for Real Education chairman Chris McGovern criticised Tuesday's "Let Kids Be Kids" campaign, saying using children as part of the protest is a "sure way of upsetting their sanity and wellbeing".

Mr McGovern said British school-leavers are shown to be doing "very badly" and believes the UK has become an "education basket case".

OECD figures reveal by the age of 15 UK youngsters are up to three years behind 15 year-olds in parts of the Asia-Pacific.

Mr McGovern said the latest figures are tantamount to a "betrayal" of the younger generation.

"Yes, we need to let kids be kids but we need to ensure that they have a future, too", he says.

"SATs are an educational health check. For short-term pain they provide long-term gain".

Parents have been keeping their children off school in protest over the controversial Sats tests.

Do you think children as young as six should be formally tested?

Take our poll and have your say:

Thousands of children are being kept away from school on Tuesday as part of a "Let Our Kids Be Kids" campaign - protesting against SATs for six, seven and 11-year-olds.

SATs exams are leaving schoolchildren "disengaged and stressed", according to some parents.

Thousands of children are being kept at home on Tuesday as part of a Let Our Kids Be Kids campaign against tests for six, seven and 11-year-olds.

Ben Ramalingam, who is keeping his five-year-old son off school, said some parents believe the situation is turning into a "mental health crisis".

"We are concerned parents taking a stand, we don't want our kids to be stressed out by the time they become teenagers because they have been inappropriately taught", he said.

"Our children are being pushed towards rote-based learning. It is like something out of Charles Dickens".

Jane Clout said: "I'm a grandmother and I sent my children through the state system in the late 1970s and early 1980s, and when I first started taking these boys to school I was struck by how primary schools have improved.

Schoolchildren in Lancaster are among thousands not going to class today in protest over rigorous new testing for six and seven-year-olds.

Good Morning Britain Correspondent Katy Rickitt is with a number of children who are campaigning against the SATs - introduced to the curriculum last year. 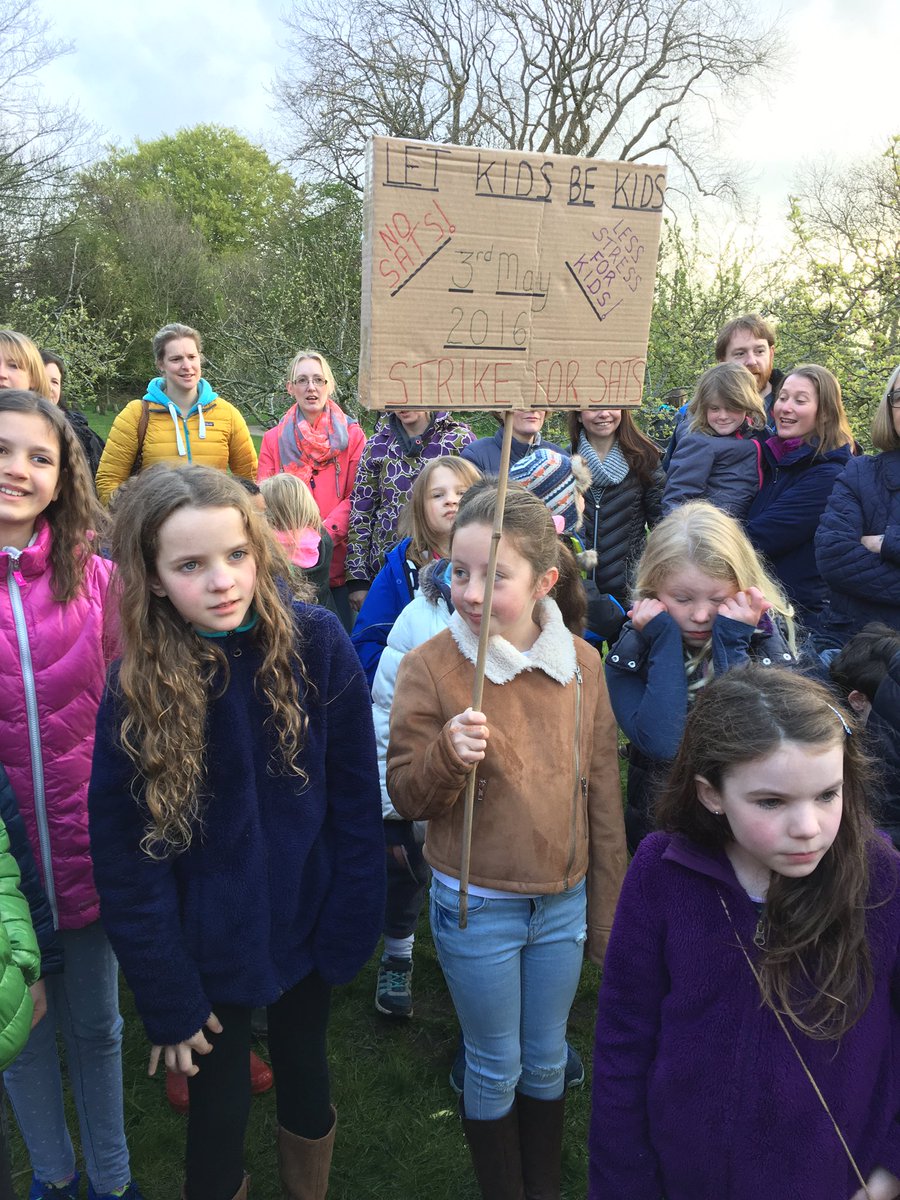 Children should not be trained for tests at the expense of developing "essential" skills such as reading, writing and grammar.

Former headteacher Kit Messenger, speaking on ITV's Good Morning Britain, said she does not favour test preparation "to the sacrifice of skills that are absolutely essential for children's futures".

Although she advocates rigorous maths and writing teaching, Ms Messenger places more emphasis on developing workplace skills such as resilience and interpersonal ability.

Ms Messenger added exams "do not necessarily tell you where children are", and that "there is not the time within the curriculum" to prepare children for tests".

"If you look at the quantity that is required for teachers to teach in order for children to be successful in the papers now - it is to the sacrifice of everything else," she said.

Parents will be taking their children out of school tomorrow in an unprecedented "strike" against compulsory exams for six-year-olds.