The International Monetary Fund (IMF) today warned that Britain leaving the EU could have a "negative and substantial effect" on the country's economic growth.

IMF boss Christine Lagarde told ITV News that a post-Brexit Britain would have to go through "a protracted period of negotiations" with partners who may not be very keen to give the country a good deal.

But some might argue the IMF has a less-than-reliable track record on economic forecasting - and given that Ms Lagarde has admitted getting things wrong in the past, why should we trust her now?

ITV News presenter Julie Etchingham sat down with her to quiz her on her remarks:

Disagreements over Europe have "bitterly divided" the Tory party for decades, John Major has warned as he attacked the pro-Brexit campaign.

The head of the International Monetary Fund issued a stark warning to voters ahead of next month's EU referendum, that a Brexit could be "pretty bad to very, very bad".

Christine Lagarde insisted the warning that leaving the EU would be detrimental for the UK economy and could see interest rates rise sharply, was part of the organisation's "tough love" mission.

But Vote Leave campaigners have said its assessment is wrong and have questioned the IMF's independence.

IMF chief Christine Lagarde has defended the organisation's "negative" assessment for UK growth in the event of a Brexit, amid varying forecasts for its outcome, particularly in the long-term.

Speaking to Julie Etchingham, she said: "It's difficult to predict 50 years ahead for sure, but you can certainly determine in the short-term, the consequences of uncertainty."

When questioned as to whether over the longer-term, there is no conclusive answer on whether it would be good or bad for economy, Lagarde said:

I think the bottom line is, for today, tomorrow, for people - will I have a job? How much will I put on the table? How much higher prices will be?

That's what really matters. And frankly, the consequences that we see, as I've said - short, medium-term, and the bearing on that longer-term is all quite negative frankly

Asked why people should listen to the IMF, when they have admitted they have got things wrong in the past, Lagarde said: "Like everybody else, we sometimes are wrong in our assessment."

"This particular exercise was conducted over the course of many weeks by a really strong team. They listened to all the economists, they looked at all the numbers," Lagarde added.

Pro-Brexit government minister Priti Patel has dismissed the IMF's warning that leaving the EU could have a "negative and substantial effect" on the UK's economy.

The Conservative MP told ITV News: "I don't think we can take their forecast at face value because of their background and also on the basis that our economy is successful right now."

"I believe that if we vote to leave the European Union, Britain has a brighter, more secure and more prosperous future," she added.

The IMF's growth forecasts from Oct 2007. Its models failed to spot that advanced economies were entering recession. https://t.co/RueDD6FpSM 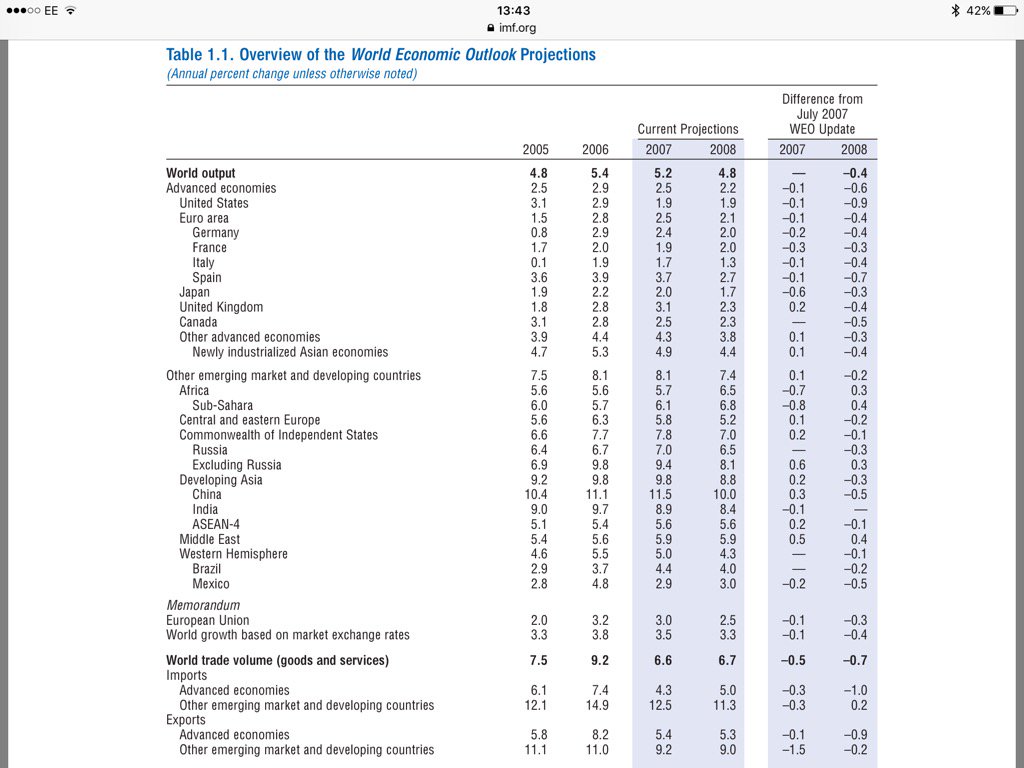 There's no reason to question the IMF's integrity or its assessment of potential risks. But its forecasting record is poor.

The prime minister has said the International Monetary Fund's Christine Lagarde "is the latest top economist" to issue a warning over the dangers of Britain leaving the European Union.

David Cameron said: "The IMF's Christine Lagarde is the latest top economist to warn leaving the EU could result in a recession - that would hit jobs and wages."

Speaking at the Treasury, the head of the IMF warned that a so-called 'Brexit' could be "pretty bad, to very, very bad" for the UK.

She also cautioned that leaving the EU would result in a "protracted period of heightened uncertainty" for the country and could see interest rates "rise sharply".

The head of the International Monetary Fund (IMF), Christine Lagarde, has said a vote for the UK to leave the European Union could push down sterling and lead to interest rates rising sharply.

Lagarde added that the organisation had concluded in its assessment that it has not seen anything positive in a possible Brexit from the EU.

She said "depending on what hypotheticals you take, it's going to be pretty bad to very, very bad".

But she also stressed that even if Britain was to remain in the EU "there are still vulnerabilities that continue to be need to be addressed".

Earlier, the IMF said Britain risks falling into a self-reinforcing cycle of weaker economic growth and lower house and share prices if voters opt to leave the EU in a June 23 referendum.

The International Monetary Fund (IMF) has made it clear that a vote to leave the European Union will "cost us money", the Chancellor has said.

George Osborne said the IMF had set out how the prospect of leaving was already having an impact on investment and hiring.

"But, the fund are also clear that this could be a mere taste of things to come if we vote to leave," he added.

His comments come in respond to the IMF's warning that a Brexit could lead to sharp drops in equity, increased house prices, and higher borrowing costs.

It follows the Bank of England's warning on Thursday that Britain leaving the EU could "materially" lower UK growth.

A vote for the UK to leave the European Union could lead to sharp drops in equity, increased house prices, and higher borrowing costs, the International Monetary Fund has warned.

It also said London's status as a global financial centre could be "eroded" and the contagion effects of a Brexit could spill over into regional and global markets.

UK inflation could rise well above target for some time, its report also cautioned.

A vote for exit would precipitate a protracted period of heightened uncertainty, leading to financial market volatility and a hit to output.

– Excerpt from the IMF report