They may have been defeated on the pitch, but the Welsh football team arrived back today to find a country united behind them, in high spirits.

Fans took to the streets of Cardiff to wait for their heroes to return - the team that is arguably the greatest Welsh team in any sport.

The Welsh football team has completed their open top bus tour and arrived at Cardiff City Stadium, ahead of a celebratory concert to welcome them home after being knocked out of the Euros.

Once the players reached the stadium, led by Gareth Bale, they mimicked the now-infamous 'battle cry' that Iceland's football players became renowned for during the championship.

Gareth Bale has talked about how thrilled he is that the Wales football team made it to the semi-final of the European Championship - the furthest the team has ever reached in a major tournament.

"When you look back on it after, you really see what we've achieved as a nation, and you see what it means to all these fans out here," he said.

"There's no prouder honour than putting on a red t-shirt for Wales."

Nicky Wire from the Manic Street Preachers has spoken about his joy at Wales reaching the semi-final of the European Championship.

"It just becomes part of the collective memory of the nation, and that's really important," he said. "Everyone who has been around for this will remember that forever."

Speaking about the band's song, Together Stronger (C'mon Wales) he added: "It's about the players and the fans. It's to say thank you."

The song, which became the team's official anthem at the Euros, will be performed for around 33,000 people Cardiff City Stadium on Friday evening.

The Wales team are in Cardiff Castle waiting to board their open top bus for a tour of Cardiff and one player couldn't resist a selfie.

Can you spot the #WAL players? Quick selfie from the castle wall from members of team #WAL #TogetherStronger https://t.co/uroVwb5ekJ 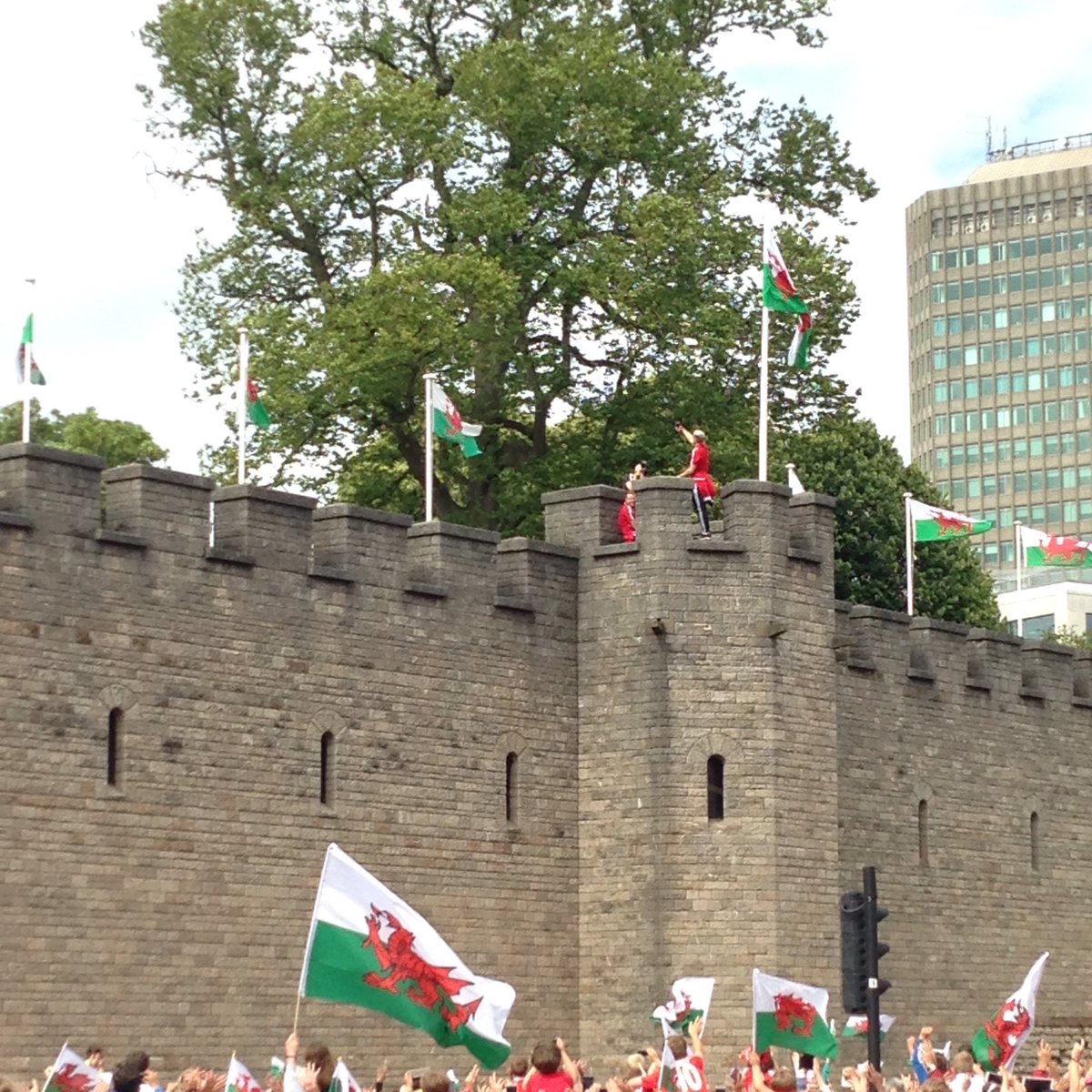 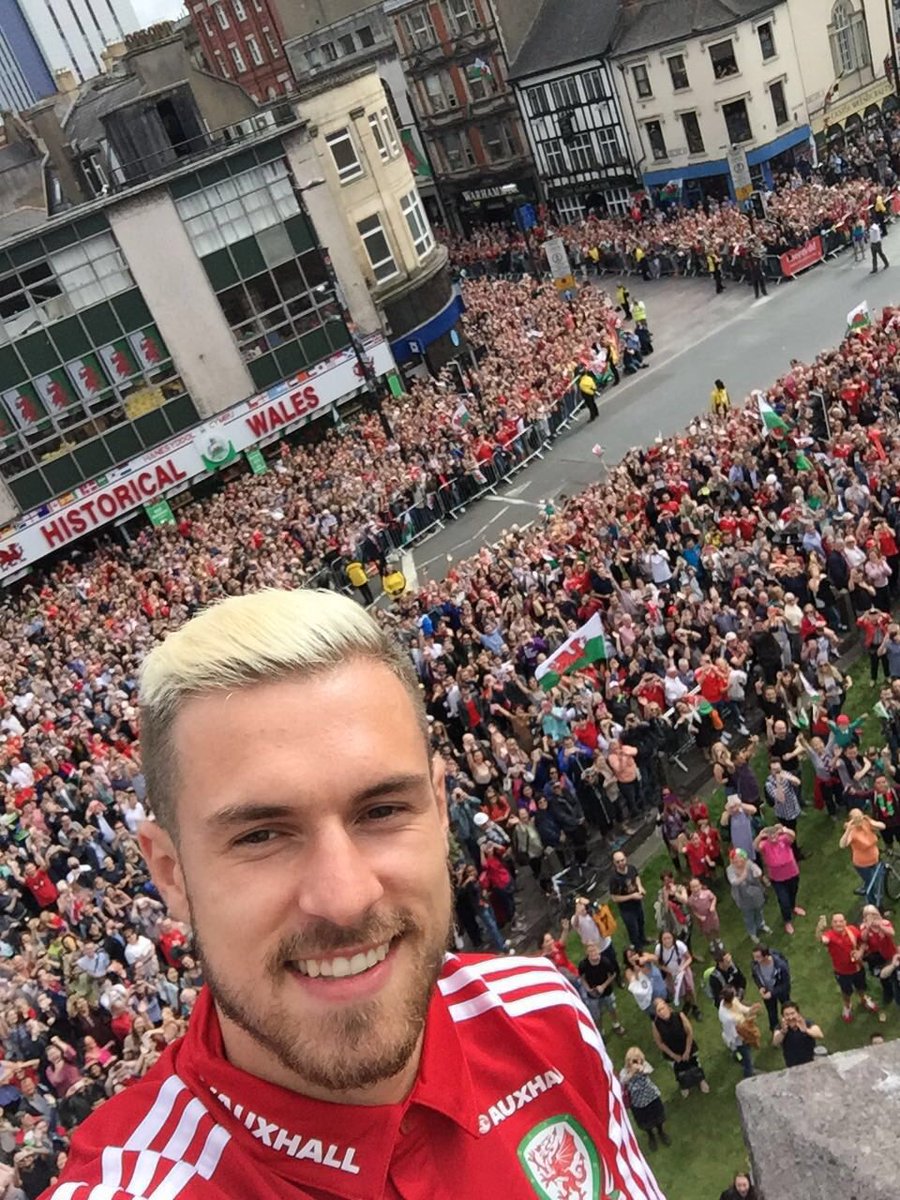 Aaron Ramsey climbed onto the castle walls for a quick snap with hundreds of fans lining the streets.

The team have arrived at Cardiff Castle! #TogetherStronger #EURO2016 https://t.co/aTqaq4HRl0 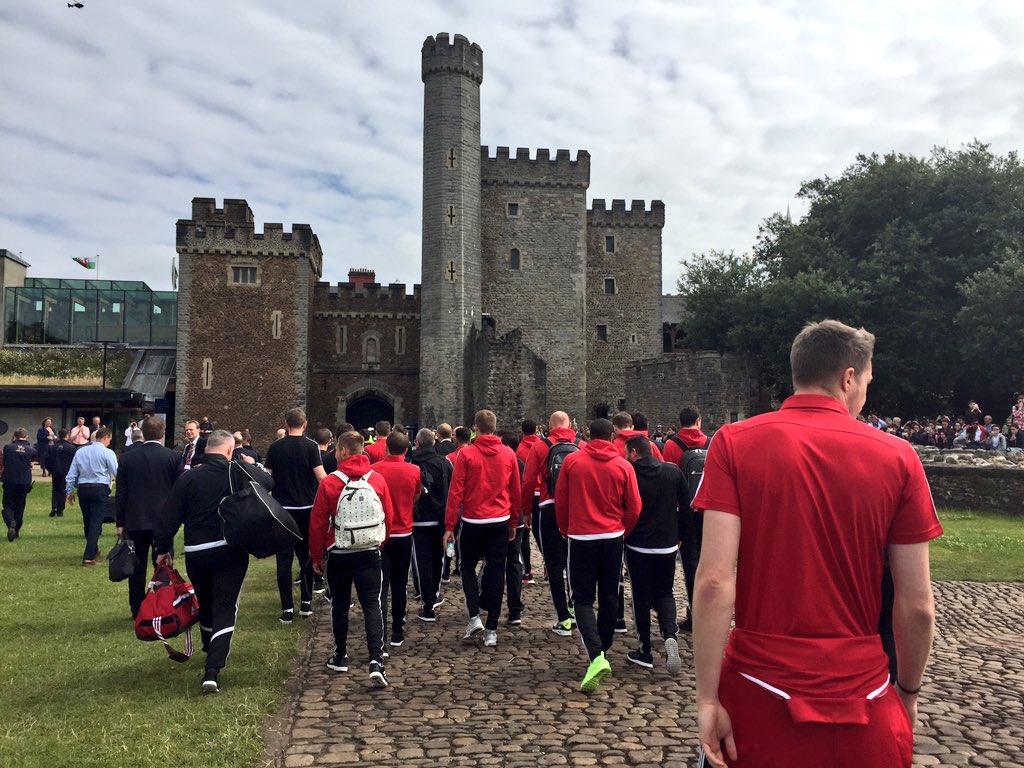 The Wales team have boarded an open top bus to take a tour around the city as part of their welcome home.

The players chanted on the bus and waved at people watching from nearby buildings.

This is the moment thousands of Wales fans greeted their football team as they arrived back from the 2016 Euro Championship in France.

Wales fans dressed as dragons, waved flags and painted their faces in preparation to welcome the Wales football team back home.

Police officers have been helping to maintain safety as crowds gather in Cardiff, and have been enjoying the atmosphere in the city too.

This policeman led chants for the crowd:

The Wales team are expected to start their open top tour of Cardiff at around 4pm.

Already the crowds have piled up to welcome their boys back.