New security checks for travellers heading to France cause tailbacks of up to 20 hours for some.

Travellers heading towards Dover could face delays for weeks to come, police have admitted after a weekend of gridlock on the roads.

Kent police said the situation was back to normal by Sunday night, with those on the roads facing a wait of about 30 minutes on the A20 approach to Dover.

However the force said that the "large volume" of holiday traffic coupled with heightened security checks "could however mean some delays over the next few weeks".

They had initially predicted severe disruption could last into Monday.

As police warn disruption at Dover is set to continue, volunteers who came to the aid of stranded motorists offer further assistance.

A woman with multiple sclerosis travelling to Germany for potentially life-changing treatment has said she endured a 20-hour ordeal due to severe delays at Dover.

Tanya Cudworth, 50, was travelling to a clinic in Frankfurt to undergo stem cell treatment for her condition after raising £5,000 for the trip.

She told the Press Association, that she set off from Tunbridge Wells at 8.30am on Saturday with her partner but they did not board a ferry until 4.20 am on Sunday.

I'm taking the trip to get this treatment that I hope will keep me from having to go in a wheelchair. It's not available on the NHS and we've done some fundraising. It's a good job I didn't have to be at the hospital sooner - 19 hours in the car has obviously aggravated my symptoms.

Ms Cudworth also claimed the couple "didn't get any water until 3am".

"I saw women with babies, young families and people with pets with no water. It's shocking that more wasn't done to get it to people, the authorities weren't anywhere to be seen."

"My partner has been a lorry driver since he got his licence and he has never seen anything like it here or abroad," she added.

Motorists travelling to the Port of Dover on the A20 have been advised that they face a five hour wait from the RoundHill tunnel to reach the port.

DOVER UPDATE: estimated waiting times to get to the Port - #A20 from Roundhill tunnels is 300 mins & 60 mins from #A2 Whitfield

Upon arrival at the port, estimated waiting time to reach French Border checks is approximately 90 mins.

UK Border Force staff have been drafted in to assist with French border checks at the Port of Dover, after motorists were caught up in delays of up to 15 hours on Saturday.

It comes after the government said motorists had suffered "extraordinary disruption", due to increased security checks in the wake of recent terror attacks in France.

Police have warned the delays could last until Monday.

Drivers who have been stranded in Dover for almost a day say the situation is getting "desperate".

One man, who said he had been stuck for 19 hours, posted a picture of his young granddaughter, who he said had become "weak and dehydrated" as the nearest place to buy water was a three-mile walk away.

Meanwhile, University of Bolton graduate Anita Klipanovic - who had been on her way to a week's holiday in Croatia - said she had been stuck in the queue for 13 hours.

#Dover Things are getting really desperate. According to GPS nearest place I can buy water is a 3 mile walk from here. Nobody is helping us

Hundreds of motorists were forced to spend the night in their cars as increased security checks by French border control in the wake of recent terror threats caused lengthy delays.

Khalsa Aid volunteers distributed the refreshments as drivers faced delays of 11 hours on the approach to the port, with many forced to spend the night in their cars. 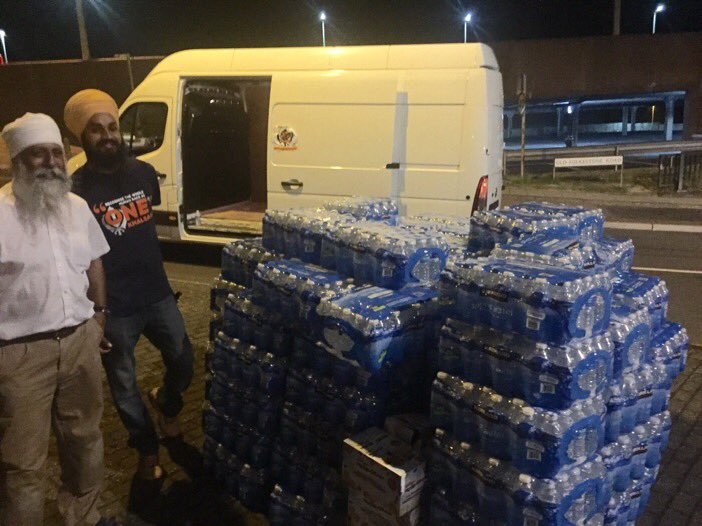 Hundreds of drivers have been forced to spend the night in their car after tightened security checks by French border officials caused huge delays.

As temperatures soared today, many were left stranded as miles of tailbacks built up.

Providing regular travel updates, the Port of Dover Twitter feed said the estimated travel time between the Roundhill Tunnels on the A20 in Folkestone to the port - a nine-mile journey - was 11 hours.

Meanwhile, from the Whitfield Roundabout on the A2 - just five miles away - motorists could expect delays of just under two hours.

#DOVER UPDATE: estimated waiting times to get to the Port - #A20 Roundhill Tunnels 701min & once you get to #PortofDover Buffer Zone 118min

#DOVER UPDATE: estimated waiting times to get to the Port - #A2 from Whitfield Roundabout 119mins

Police have warned disruption on the roads to Dover could last until Monday causing further misery for holidaymakers.

Many travellers have been stuck in lengthy queues for hours, as they attempt to make their way towards the Channel at the beginning of the great summer getaway.

Kent Police, who alongside the coastguard are delivering more than 11,000 bottles of water to travellers, said the disruption is down to a "vast volume of holiday traffic" coupled with delays caused by heightened security at the border.

Shadow Home Secretary Andy Burnham said the Home Office and the Department of Transport had been "caught ill-prepared".

The Government needs to get on the phone to the French authorities and get a grip on this outrageous situation...This can't carry on and it certainly can't happen again. Ministers must take action to assist the thousands of holiday-makers who, through no fault of their own, are now stranded.

A Government spokesman said: "People's safety is paramount. We are acutely aware of the effect the disruption is having in the Dover area and we continue to co-operate with the French authorities about a range of operational matters."